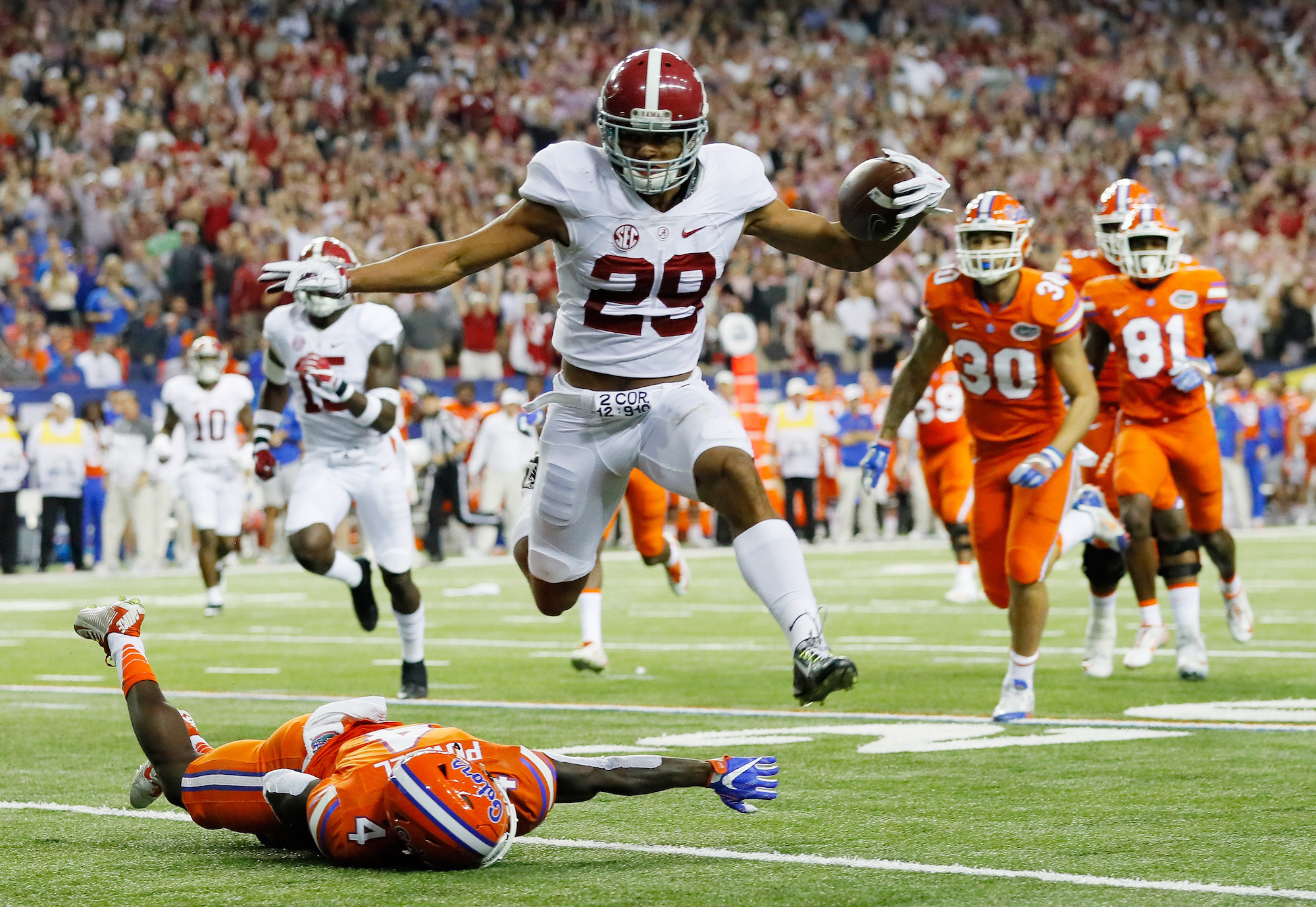 In the world of college football, there is perhaps no take that people want to come true more than the demise of the Alabama Crimson Tide football dynasty under Nick Saban.

Everyone loves a winner, but then once we’ve determined they’ve won enough for their own good, everyone loves schadenfreude instead. The problem with Saban and Bama is that every time you might think they’re about to give you what you want, they go back to reminded you that the dynasty isn’t just still rolling, but doing so in dominant fashion.

That day will come, mind you. Either because Saban leaves or because the winds of college football shift just enough. But given that Alabama has five SEC titles and four National Titles in eight years (with potentially another coming) and boasts an astounding 113–18 record under Saban, that day is not here yet. Further proof of that came Saturday in the form of Bama’s 54-16 victory over Florida in the SEC Championship Game.

The truth is, you’re not going to get any bonus points for claiming the Alabama dynasty is over. It’s the low hanging fruit of Hot Takes. If you’re wrong (and you’re always wrong for now), you’re overshadowed by all the other people saying the same thing. But eventually, it’ll be right so you might as well throw your dart in the hopes that it sticks when the time comes.

We have to go back to 2013 when Bleacher Report’s Barrett Sallee tried to plant his flag in The Bama Deadness Theorem following the team’s loss in the epic Kick Six game.

It was the little things and the lack of attention to detail in big situations that cost Alabama its dynasty on Saturday night.

The landscape in college football is changing for everyone, and Alabama has essentially hit the reset button. The Crimson Tide are going to have a new quarterback, some new pieces along the offensive line—especially if tackle Cyrus Kouandjio declares early—a new quarterback of the defense as linebacker C.J. Mosley moves on and some upheaval in the defensive backfield.

On top of that, the rules have changed. In the age of a college football playoff, it will be easier to get in position to win titles but arguably harder to actually bust down that door.

The changing landscape, roster turnover and Alabama’s loss to Auburn effectively ended this dynasty. But based on how Saban has recruited over the last few seasons, building a new one isn’t going to be as challenging this time around.

The Patron Saint of Bama Dead-ness, however, has to be Colin Cowherd. Back in October 2014, No. 3 Bama lost 23-17 to No. 11 Ole Miss in Oxford and Cowherd appeared on The Paul Finebaum Show to declare that Alabama was indeed, this time, for real, dead.

Cowherd had said the same thing and much more in December 2013 on The Paul Finebaum Show:

I think he’s going to be a nightmare. I am amazed that Alabama fans aren’t concerned about Gus Malzahn.”

“The people that give Nick trouble, and I’ve heard this from rival coaches who love Nick, is that Nick – like (Bill) Belichick – has a system. When you can get Nick out of his system, that you have out-of-the-box contrarian thinkers that don’t think like Nick thinks, they force Nick in uncomfortable places, to do things with his defense that he normally doesn’t have to normally do, he’s at his weakest.

“Nick is not great off the rails or against unpredictable coaches,” Cowherd said. “He has more trouble with quirky than substantial. He’ll go toe to toe with substantial. So I think Malzahn is built to give Nick trouble.

“I want all you Alabama fans, who love Finebaum and hate me, to know,” Cowherd said. “Right now, you’re driving around and I’m here to tell you that you’re going to start to lose to Gus Malzahn.

From there, Alabama rattled off eight-straight wins to grab another SEC Championship and advance to the first College Football Playoff. Best. Dead. Ever.

However, one-seed Bama lost to four-seed Ohio State in that College Football Playoff semifinal game and you know what that means. The loss was shocking in the moment, though undercut by the fact that the Buckeyes went on to win the title. Joe Davidson at the Sacramento Bee had an appreciation for what appeared to be the end of an era.

Not to be outdone, Sallee came back strong with a reiteration about the deadness of all things Alabama Football Dynasty.

If you didn't think the Alabama dynasty was dead before, it is now http://t.co/r10wAk3Yo4

If you weren’t a believer that the Alabama dynasty ended when Chris Davis took a missed field goal back 109 yards to end last season’s Iron Bowl or Oklahoma wrecked shop in the 2014 Allstate Sugar Bowl, you should be now.

Not everyone was quite as willing to signal the end of an era at that point. However, when the No. 2 Tide lost 43-37 to No. 15 Ole Miss in the third game of the 2015 season, the Hot Take floodgates opened and everyone who had been waiting for their chance to eulogize Saban’s Alabama came forward.

Clay Travis: “Alabama’s dynasty is dead…will Alabama still have anything to play for after October 3?”

No two college football dynasties are exactly alike, but they all look the same at the end. At first, they are so mighty it almost takes something from the cosmos to strike them down. Maybe an amazing effort from an opponent, maybe a bolt of bad of luck. Then the veneer of invincibility gets stripped away and those moments tend to come more frequently and forcefully. Before you know it, the run of excellence goes from difficult to maintain to impossible.

It’s hard to say exactly where Nick Saban’s Alabama falls on that spectrum traveled by Urban Meyer’s Florida Gators, Pete Carroll’s USC Trojans and so many others before them. But make no mistake, what happened here at Bryant-Denny Stadium late Saturday night in No. 11 Ole Miss’ 43-37 victory was the clearest sign yet this unbelievable epoch in Alabama football history is much closer to the end than the beginning.

"The dynasty argument is about a state of mind, a state of being. That's gone. That no longer exists at Alabama." – @DanWolken

Many others hedged their bets by asking the question aloud rather than committing to a hard truth. Fox Sports’ Stewart Mandel said, “Saban’s Tide appear more mortal than they ever did during their run of three national championships in four years from 2009-12.” Yahoo! Sports’ Pat Forde said the key sign to the program’s demise was that “the great Alabama teams didn’t suffer” from the kinds of problems this team was having. Butch Dill at The News & Observer said it certainly “feels like the end of an era.” And the Sporting News’ Matt Hayes took Alabama to task for their excuses.

“Welcome, everyone, to the fall of a champion.”

Bleacher Report’s Bryan Fischer even went as far as to infer that if the Alabama dynasty was indeed dead, perhaps so was the idea of ever seeing a college football dynasty again.

All Alabama did after that loss was win ten games in a row, including blowout wins over No. 8 Georgia, No. 9 Texas A&M, No. 2 LSU, and Auburn, to head back to another College Football Playoff. This time they left no doubt by throttling Michigan State 38-0 in the semifinal and holding off Clemson 45-40 to win their fourth National Title in seven years.

All of this isn’t to say that Alabama’s deadness in some form or another wasn’t still real. Colin Cowherd eventually admitted he was wrong about Gus Malzahn becoming Saban’s nightmare. But, never one to back down from the truth, Cowherd saw that the ratings for Alabama-Clemson and took a new angle. The dynasty isn’t dead, it’s just too dynasty-ish.

Either way, we’re pretty sure Nick Saban don’t care. He and Alabama just keep winning. The Bama Dynasty marches on to yet another College Football Playoff and potentially another National Title. And they keep doing so no matter how many times you say they’re done.

So while we await that inevitable day when the Alabama Dynasty does end, let’s re-live some of the hot take history highlights.