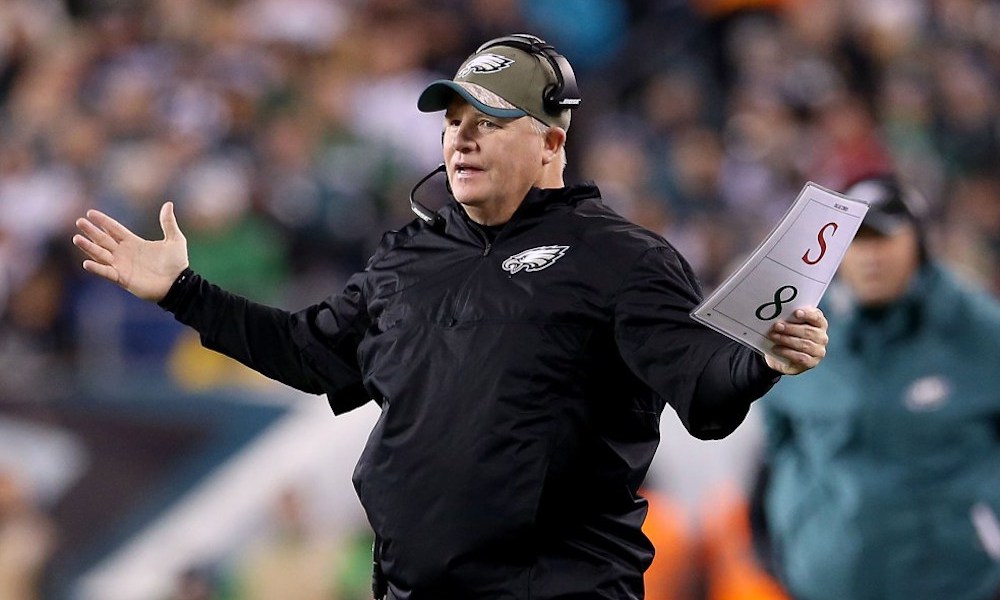 Andy Reid was the most successful head coach in the history of the Philadelphia Eagles, at least during the Super Bowl Era of the NFL. During a 14-year run under Reid, the Eagles played in five NFC Championship Games and one Super Bowl while winning a good handful of NFC East titles with players like Donovan McNabb, Brian Dawkins, Terrell Owens and DeSean Jackson and Brian Westbrook. Nobody would argue this run of Eagles football was the most successful in the history of the franchise even though it never netted a Lombardi Trophy in a division where each division rival has multiple Super Bowl championships to brag about (and that point is used by fans of each franchise when poking fun at the Eagles every year). In 2011, the Eagles ended the year with a stale 8-8 record. A change was thought to be coming at the head coaching position, but owner Jeff Lurie instead backed Reid and went one more year with Big Red. The 2012 season was a struggle at 4-12 as the win total dropped for the third straight season. The time to breathe new life into the franchise had come, so Lurie made the decision to part ways with Reid and hire a new, flashy offensive genius to get things back in swing.

Kelly was one of the hottest coaching names in the rumor mill at the time after a wildly successful run at Oregon that led to an appearance in the BCS Championship Game and Pac-12 dominance but was in the midst of a cloud of uncertainty with an NCAA investigation hanging over the head of the program. Kelly’s offense was considered revolutionary to many, but would it work in the National Football League? After years of shying away from NFL rumors, Kelly finally took the bait that was offered by Lurie, who needed to bring in a coach that could get the most out of the offense once again. Trying something new and unorthodox was not something to be intimidated by in Philadelphia, where the same generic formula had never proven capable of winning the ultimate prize. What was there to lose for Lurie? In the beginning, not much.

Hiring Kelly was considered a solid hire for the Eagles, although it was one that came with a number of questions that could not be answered until seeing what would unfold in the regular season. If Kelly’s offense really was a gimmick, surely it would be exposed right out of the gate against NFL defenses. Kelly’s first test in the NFL would be a Monday Night Football matchup on the road against the defending NFC East champions, the Washington Redskins, with Robert Griffin III marking his return to the field. Kelly and the Eagles stunned the Redskins with their up-tempo style and flair and big plays. A brilliant and bewildering first half of play saw the Eagles jump out to a 26-7 lead on the road in the Monday night opener, and the buzz got started just as fast as a Chip Kelly offensive possession would like. The takes came flying in on Twitter with believers and naysayers all seemingly agreeing that Kelly was already proving his doubters wrong at the next level after just one regular season game.

Chip Kelly's scheme is unreal. So fun to watch. And Philadelphia's personnel is perfect for it. #fast

Chip Kelly will change the NFL.

We would find out soon enough he was really just a bad, bad fit in the NFL. But on this night, even one of the all-time great Eagles players coudln’t help but be excited about what the new-look Eagles were doing.

I think I'm already in love with Chip Kelly and this offense. #PHIvsWAS #Eagles #Redskins

Just want to remind everyone that I tweeted out that @smartfootball article on Chip Kelly 100+ times. Been a believer for a LONG time.

Can we now get some later “expert” analysis, Larry?

How many copycats will there be in the NFL of this Chip Kelly tempo/offense? #EaglesTalk

It turns out, not too many.

After seeing what the Eagles are doing with Chip Kelly in charge, when can we expect Art Briles, Kevin Sumlin and Mike Gundy in the NFL?

As an Eagles fan may I say: Chip Kelly I'm sorry I ever doubted you. #thisisbonkers

Are you still sorry, Chris?

"Chip Kelly's style won't work in the NFL." – nobody ever again #MNF

Nah, you can utter those words again. It’s OK.

Kelly’s debut season in the NFL ended with a 10-6 record and the NFC East Division championship, but with a loss at home to Drew Brees and the New Orleans Saints. The home loss stung and took some life out of the team’s direction and allowed pessimism and concern about the Eagles under Kelly to breathe all offseason. The Eagles went 10-6 in Kelly’s second season, but this time the Birds just missed the playoffs behind a pair of 11-win teams in Arizona (who beat the Eagles head-to-head in the regular season) and Detroit. Making things worse for Kelly was the fact the Eagles were sitting in the driver’s seat of the NFC East following a 33-10 win over the Cowboys to go 9-3 as of November 27. With a one-game lead in the division, the Eagles then lost the next three games, including a rematch with the Cowboys and lost the division by two games. It was not quite the 1964 Phillies, but this was one of the biggest choke jobs in Philadelphia in a very long time. And once again, there was an entire offseason to stew about it in Philadelphia.

Kelly lasted one more season in Philly, with Eagles owner admitting to his hiring mistake and removing Kelly as head coach toward the end of a 7-9 season. Kelly would go 6-9 before the Eagles handed the team off to Pat Shurmur for one final game and ultimately returning to the Andy Reid-esque strategy by hiring Reid’s assistant in Kansas City, Doug Pederson. Kelly landed his second NFL job with the San Francisco 49ers, but things continue to devolve for him on the west coast. At 1-12 following an overtime loss at home to the New York Jets, Kelly has all but run out of supporters willing to come to his defense at the NFL level. The calls and rumors about college coaching opportunities continue to grow louder despite Kelly’s attempts to shrug those aside as he is known to do.

This much has been learned in the past four years with Chip Kelly in the NFL. The offense can have its moments with the right roster to take advantage of it, but does not appear to be one that can lead to sustained success and deliver a championship. Kelly’s time in the NFL appears to be coming to an end, but the door to a good college job will always seemingly be open.

Chip Kelly’s NFL career may not have planned out as some had hoped, but it was sure fun for one game.

Stephen A. Smith was approached about running for Senate: “I would piss off millions.”