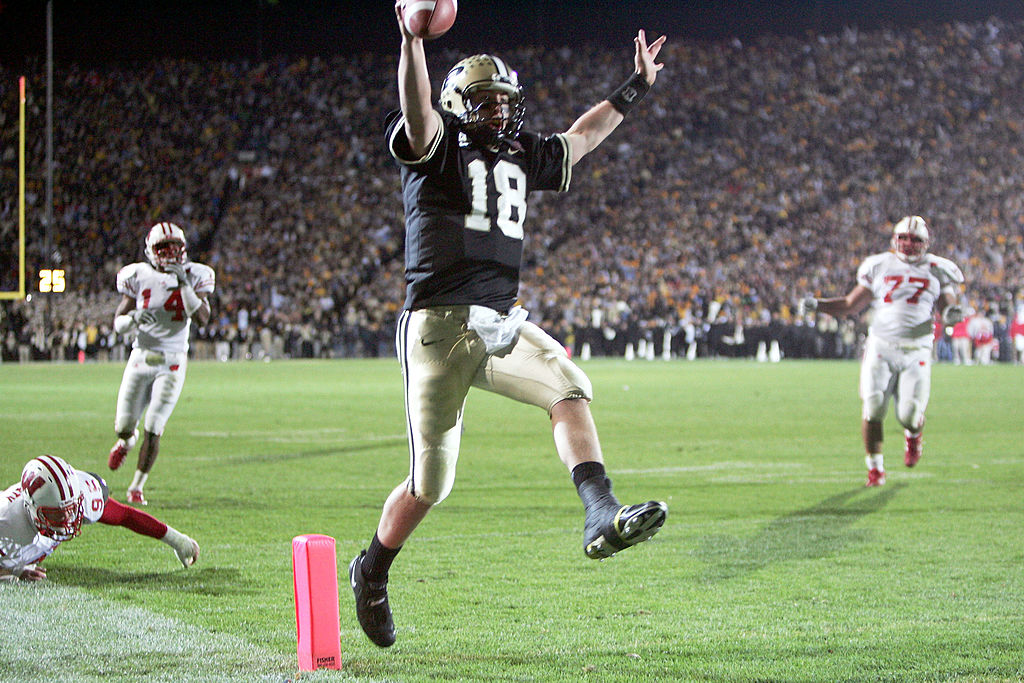 The only thing college football writers and analysts like more than debating rankings is prematurely awarding the Heisman Trophy to someone who ultimately does not end up winning it.

If the Heisman was handed out in September or October there would be a COMPLETELY different list of winners over the year for the stiff-arm trophy, but there’s a reason why we wait until the end of the college football season to do so.

Of course, this year that might not be the case as early front-runner Lamar Jackson of Louisville is still the huge odds-on favorite to lift the trophy in spite of the Cardinals’ late season slide. However, we’ve seen plenty of athletes race out to early head starts but fail to reach the finish line first. We’ve also seen our fair share of wild proclamations that failed to come true and are now designated for their place in Cold Take history.

Let’s take a look at some of the best false starts in awarding the Heisman Trophy from recent college football history.

We have to time-travel back almost 30 years to the days when sportswriters and analysts couldn’t just tweet cold takes from their smartphones. They actually had to record them in things we used to call newspapers.

The Heisman race is over. Trust me.UCLA’s Troy Aikman, who already had an overwhelming lead coming in, wrapped it up Saturday by delivering two of the finest clutch plays in his distinguished career.

Surprisingly, the Bruins’ blond quarterback did it not only with his celebrated arm, but with his less-than-celebrated feet, helping his No. 2-ranked team pull out a theatrical, 24-17, televised victory over Washington in Seattle.

In some parts of the country today, they’ll try to tell you the Heisman race is still very much alive. Take Miami, for instance, where Steve Walsh continues to throw touchdown passes the way Vinny Testaverde and Bernie Kosar once did. Most loyal Floridians are prepared to argue the point until their suntans begin to fade.

Well, sorry, folks. Walsh is a fine college quarterback. But he simply didn’t have enough publicity coming in. Heisman candidates evolve as juniors and are endorsed, in their own not-so-subtle way, during the summer of their senior years.

The trophies, themselves, are then postmarked in the early season. Ask Tim Brown.

He captured his bronze statue with a couple of highly visible, early punt returns against Michigan State a year ago. And now Troy Aikman, the clear front-runner, has locked up his with a terrific performance against Nebraska and a dramatic, last-minute show in Seattle on Saturday.

But the race for the Heisman? Forget it.

Better yet, put a fork in it.

Eventual Winner – Barry Sanders, Oklahoma State RB
What Happened to Aikman? – It wasn’t so much about what Aikman didn’t do that season, as he would go on to have a fine campaign and finish third in the voting. It was about what Barry Sanders did do as he rushed for an absurd 2,628 rushing yards, a single-season record that still stands to this day. Hopefully the Heisman Trust was able to get their trophy back from Bisheff without too much trouble.

How about this for a cameo – Buster Olney with college football cold takes! When the ESPN baseball reporter was working for the San Diego Union, he wrote this on September 2, 1991 about Houston’s gunslinging quarterback.

David Klingler, Houston: Admit it. You hate him for chucking all those touchdowns in blowouts and pumping his numbers. Go ahead and throw out all his stats against chumps. He’d still be way ahead of everybody else. Give him the Heisman now and spare us all the hype –Klingler himself calls the trophy “just a doorstop that’s going to end up gathering dust on somebody’s floor.”

Eventual Winner – Desmond Howard, Michigan WR
What Happened to Klingler? – Talk about a jinx. After finishing 5th in the Heisman the year before, Klingler and the Cougars were ranked preseason #12 in the country. Houston went 4-7 on the year and Klingler’s passing yardage total fell from 5140 yards to 3388 yards from 1990 to 1991, where he fell outside the Top 10 in voting. It didn’t stop the Bengals from drafting him with the 6th overall pick at the 1992 NFL Draft, though… and we all know how that turned out. And yes, Klingler really did say that about the Heisman Trophy.

Oh and by the way, in the same column Olney gave the 1993 Heisman to Tommy Maddox, the quarterback at UCLA. Maddox never won the Heisman, but he did win the MVP in a football league created by Vince McMahon.

Yes, there was a time when Purdue was relevant. And yes, there was a time when Kyle Orton was called the best player in college football. On October 3rd, 2004, the Fort Wayne Journal Gazette printed an article titled “Just give Heisman to Orton now” containing the below words after Orton led the Boilermakers to a victory over Notre Dame. Against the Irish, Orton threw for 385 yards and 4 TDs to move Purdue to 4-0 on the season.  There’s nothing quite like having success against Notre Dame to get the hype train rolling.

Then he said, gosh, he never figured they’d come up here and score 41 points against this Notre Dame team without any turnovers, but it sure was great they did. He said he audibled, um, about 40 percent of the time Saturday. He said all the Heisman talk is flattering, but it’s not something he thinks about much, except in the sense that winning it would probably mean Purdue had a great season.

I’ll talk about the fact that, with 17 touchdown passes and no interceptions in four games, and a completion rate close to 70 percent, only USC’s Matt Leinart is in the same room with Orton right now, and Saturday pushed Leinart closer to the door. I’ll talk about Taylor Stubblefield striking the Heisman pose in Orton’s honor after one of his touchdowns, and how it was only truth in advertising.

I’ll talk about following the best football player in America off the field at the end, in the last slanting light of a radiant day. He was surrounded by media types. There were two lime-green smudges, grass stains, above the 18 on the back of his jersey. Even Notre Dame fans snapped his picture.

As he passed through the north end zone, crossing from sunlight to shadow, a blond coed in a Purdue sweatshirt materialized above the tunnel leading off the field. She was holding up a sign. It read “Orton for President,” and beneath it the words “Bush” and “Kerry” were both crossed out.

Eventual Winner – Matt Leinart, USC QB
What Happened to Orton? – Purdue finished 2-4 and Orton had only one 300 yard passing game the rest of the season, leaving him completely out of the Heisman picture. He would later go on to be one of many Chicago Bears quarterbacks that have come and gone… but that neckbeard sure looked great in the last slanting light of a radiant day.

On a college football note they should just give Denard Robinson the heisman right now. Save the other finalists (cont) http://tl.gd/6adigd

Denard Robinson is the most outstanding football player I have ever seen. Give this guy the Heisman already!

Eventual Winner – Cam Newton, Auburn QB
What Happened to Robinson? – Robinson burst onto the scene with over 500 yards of total offense in an early-season victory over (you guessed it) Notre Dame. The Michigan dual-threat quarterback finished 6th in the voting after Michigan finished the season by losing 5 of their last 7 games, including a 37-7 loss at arch-rival Ohio State. Nevertheless, Robinson set a record with 1,702 rushing yards by a quarterback and was even named to the FWAA All-American Team as a running back.

Just give Geno Smith the Heisman

Just give Geno Smith the Heisman now. WVU is a beastly offensive juggernaut.

There's really no need to vote for the Heisman Trophy winner his year, just give it to Geno Smith. 577 and 7 TDs. The mans a beast #WVU

Give the Heisman to GeNo Smith!!

Eventual Winner –  Johnny Manziel, Texas A&M QB
What Happened to Smith? – West Virginia was flying high after a 5-0 start and scoring more than 40 points in 4 of those games. However, Smith and the Mountaineers came back to earth quickly with a 5 game losing streak to match their hot start. In spite of throwing for over 4200 yards and 42 TDs, Smith didn’t even crack the Top 10 of Heisman voting.

Give Manziel the Heisman NOW!!! Just for that play!!!

Just give him the Heisman right now.

Just give him the Heisman again. #goodnessgracious

That's all Evans. Give him the heisman. No other wr makes that play.

Eventual Winner – Jameis Winston
What Happened to Manziel and Evans? – There was a lot of buzz in 2013 that Manziel could become the first player since Archie Griffin to win a second Heisman Trophy in his sophomore campaign. His fellow redshirt sophomore, star receiver Mike Evans, would earn some buzz of his own. But this is the perfect example of getting caught up in the moment when prematurely handing out the Heisman Trophy. Evans and Manziel had two amazing games: against Alabama and Auburn.

Two games does not a Heisman campaign make, though. A&M finished 8-4 in 2013, Manziel finished 5th in Heisman voting and Evans didn’t even make the Top 10.

Can we just give Fournette the Heisman trophy now?

No need for a vote this year: Fournette wins the Heisman.

Just give the Heisman Trophy to Leonard Fournette already. Don't even bother with holding a ceremony in December.

Don't waste time give FOURNETTE LSU @Heisman now / IT IS OVER BABY !

Eventual Winner – Derrick Henry, Alabama RB
What Happened to Fournette? – It is kind of amazing that Leonard Fournette will leave LSU without winning a Heisman Trophy after some of his jaw-dropping numbers and highlight reel runs. Last year could and should have been the year and many were awarding him the trophy in October after he rushed for no less than 150 yards in his first seven games. Then LSU faced Alabama. And Fournette was held to 31 yards on 19 carries. Ironically enough, it was Alabama RB Derrick Henry (who had 210 yards that day) that won the award as Fournette fell all the way to 6th in the voting.

As for this year’s Heisman race? Well, there’s plenty of candidates to choose from.