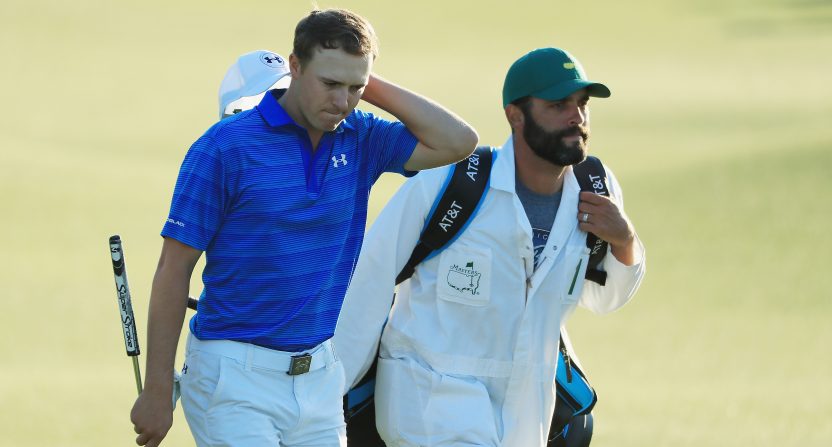 It was one of the worst Masters final round collapses of all time, and probably the most unbelievable one.  The level of unfathomability of Jordan Spieth blowing a five stroke lead at the turn on Sunday at the Masters was as high as possible.  But it happened; and left in its wake was a transcript of Cold Takes that Cold Take enthusiasts (yes, there are very few that exist) normally dream about.

By the time the 2016 Masters commenced, the 22-year old Spieth was already near the top of golf’s mountain. In 2015, he took the PGA Tour by storm.  His first major victory, the 2015 Masters, was a domination unseen in Augusta since Tiger Woods 18 years prior.  Spieth was the wire-to-wire leader finishing with an absurd 18-under 270, tying Woods’ 1997 tournament record. He also broke the Masters record for lowest score after three rounds with a 14-under 200.  Spieth followed up his Masters win by winning the 2015 U.S. Open, his second major. He then won The Tour Championship and finished second at the PGA Championship behind Jason Day. With a total of six tournament championships, Spieth swept almost all end of the year PGA accolades, including Player of the Year and Tour Player of the Year.

Fast forward to April 2016. When Spieth drained a 21-foot putt on the 9th hole during the final round of the 2016 Masters (a course that he obliterated one yer prior) for his fourth straight birdie to take a five stroke lead, it was a near certainty to just about everyone that he would be taking home his second straight green jacket.  What people didn’t expect, was the seemingy unflappable Spieth bogeying the 10th and 11th holes then hitting his a tee shot into the water on 12 to eventually score a massive quadruple bogey. After the disasterous hole, he was four strokes back of the lead and never recovered.  The benefactor of Spieth’s epic collapse: Danny Willett, who took home the green jacket and his first major win.

To just list all of the tweets crowning Spieth the winner during the final round in chronological order would not do this justice. No, these needed to be broken down in categories. Below are is a categorical collection of tweets mostly beginning from when Spieth sank the putt to give him five stroke lead going into the 10th hole.

One of the narratives that materialized throughout Spieth’s blistering run through the PGA over the previous year was his ability to constantly hit clutch shots and never be deterred by pressure.  It seemed that he was unflappable, a robot who never feels emotion; he was a closer, like Tiger Woods in his prime. To some, there was no concievable way he would choke…

Jordan Spieth may never trail a Masters tournament for the rest of his career. Just doesn't let up.

Jordan Spieth is turning into a Tiger terminator as ferocious Sunday closer.

I want to handle anything as well as Jordan Spieth handles pressure.

Spieth's relentless consistency is pretty boring. I'd quite like him to get embroiled in some sort of sex scandal. #TheMasters

I don't think Spieth has much Norman in him. And I don't see a Faldo in pursuit. Could be a pretty mundane Masters Sunday back nine.

The old adage is that the Masters doesn’t really begin until the back nine on Sunday.  The problem in this situation was that it seemed like Spieth aready had it won before the 10th hole, ruining the fun for the viewers.  Some expressed their annoyance and frustration with the lack of excitement…

I really like Jordan Spieth, but this has to be the MOST boring Masters Tournament of all time.

Back nine on Sunday at #Masters: They say it doesn't begin until now. Except, it's already over. #Spieth

Spieth turning in this into an old Tiger major. Back 9 Sunday just a formality #Masters

Looks like I'm going to watch more of the @Cubs game than I anticipated. Jordan Spieth is just going to roll through this round.

If #TheMasters doesn't start until the back 9 on Sunday why does this already feel over ? #Spieth #Masters2016 #yyc

This has to be one of the most boring #Masters as #JordanSpieth is lapping the competition.I've already taken two power naps. #Where'sTiger

Spieth is so far ahead and boring that they've stopped showing him on Sky. Reminds me of Schumacher years ago. #TheMasters

One of the great traditions in all of sports is that the winner of the Masters is awarded a green Masters jacket.  Many were ready to hand Spieth the jacket…

Game over. Give Spieth the green jacket now.

Give Spieth his green jacket. Well on his way to top Nicklaus' 6 wins at The Masters.

Fun fact: jordan Spieth, and all multiple-time winners at The Mastres don't get a second jacket. Just one, and it's kept at Augusta.

It was getting late overseas, and since Spieth had such a big lead some of the folks watching in Europe felt it was safe to go to bed…

Might as well get some shut eye #spieth #masters #jobdone ?

Spieth 7 under, 5 clear, cant see him losing now, as I head off for some shut eye

I was about to transfer my support from McIlroy to Willett and Westwood. But after seeing another Spieth birdie I might just go to bed.

Spieth making every golf fan go to bed early. In cruise control now. On -7 and five ahead #Masters2016

Here is some of the best of the rest.  Declarations, coronations, you name it…

Jordan Spieth is going back to back. #Masters pic.twitter.com/fb2SmHUHqG

It's over. Our Spieth +850 futures ticket is cashing. Go buy $20 pants, tshirts and visors at https://t.co/dkDDwTBbJ7

Welcome to the Back 9 of the Jordan Spieth Invitational. #Masters

Spieth just won his second #Masters with that birdie.

Well, that should do it. Spieth rolls in just another curling downhill birdie at 9 — four in a row since stumble at 5. Five shot lead.

Spieth's 21-footer makes Amen Corner almost irrelevant in this final round of the #Masters.

Spieth just throws a dagger at the field!!! Jordan makes his FOURTH birdie in a row!!!! Now at -7 and 5 strokes… https://t.co/UCIPa2ojDn

Let the coronation continue. Spieth running away and hiding is our best-case scenario now. More like only-case…. #Masters

Four birdies in a row for Spieth to close out the back 9. If you don't have an each-way runner, this one is over! pic.twitter.com/abMwo6Ng78

Jordan Spieth birdies 4 in a row to reach -7, this is over @TheMasters

Spieth is a BEAST … So cool and so damn good. #bossofthemoss

If u are watching the masters. It's because u love golf The tournament is over at this point

My tweet from 40-mins ago when Spieth was -7 and five shots clear was weather guy wrong….

Spoke far too soon and glad I haven't gone to bed!!

Must admit, I was so deflated Spieth was running away I went for the Bayless Jinx, crowning him at 5 up, 9 to play. Doubted it would work.

Life comes at everyone fast sometimes it appears.