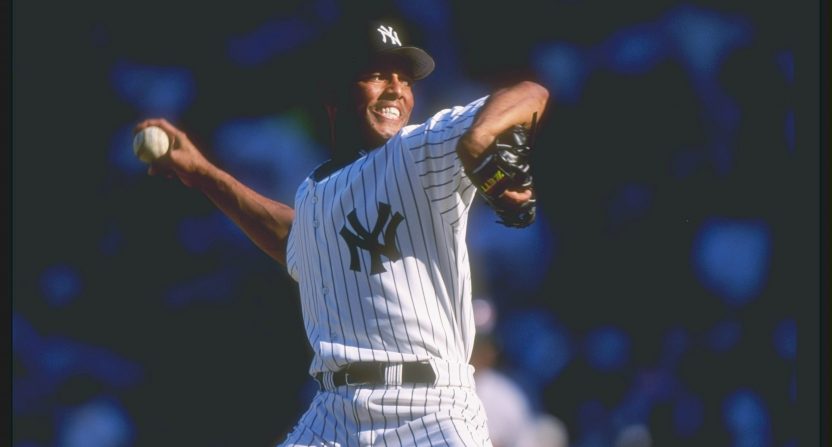 John Wetteland was a huge reason the Yankees won the 1996 World Series. In fact, he was World Series MVP, having closed all four of his team’s victories, capping a season in which he led the American League with 43 saves.

The celebration was short lived. A few months later, after the Yankees wouldn’t fork over the money to keep free agent Wetteland, he left to sign with the Texas Rangers. This seemed like a big loss for the Yankees. After all, the only in-house replacement they had for Wetteland was a set-up man named Mariano Rivera, who had a promising fastball but no experience as a closer.

Rivera, who began his career with the Yanks as a starter, broke out in 1996 as a reliever in the set-up role, with a 2.09 ERA and 130 strikeouts in a whopping 107.2 innings. But he was untested as a closer, and not everyone was sure he could handle the ninth inning.

“As good as Rivera is at what he does, he isn’t a qualified closer yet,” wrote Dan Castellano in the Star-Ledger. “He can’t do it every day the way Wetteland can. And even if Rivera could adequately replace Wetteland, who would take Rivera’s place? Nobody can fill that role the way Rivera did.

The concerns were not only coming from the print media. In a New York Daily News column, Mike Lupica relayed the worries of TV commentator Tim McCarver:

Tim McCarver was talking yesterday about the way the Yankee bullpen set up this season, right through Wetteland getting the last three outs, and said, “If (Wetteland) goes, they may have weakened themselves at three positions.”

Though many writers worried chiefly about how the Yankees would replace Rivera in the middle innings, there was also ample concern about the 27-year-old’s reliability and durability. Could he pitched three days in a row? Could he withstand another season of massive innings loads?

All worries about Rivera were amplified in April 1997, when he blew three of his first six save opportunities, allowing 14 hits and four runs in his first nine innings of the season.

This dispatch, written by John Giannone, appeared in the New York Daily News after a Mark McGwire home run resulted in the second of those blown saves:

But to hear their neophyte closer admit to a fragile psyche moments after the Yanks’ 3-1, 12-inning loss to the Athletics in the home opener at the Stadium gives the club legitimate cause for concern.

“Because it’s the ninth, I’ve been putting too much pressure on myself, like I’ve got to get this guy,” Rivera said. “I have to go out like last year, go have fun and throw like I can throw, treat it like the sixth and seventh or the seventh and eighth.

“I haven’t been doing that. I don’t know what’s going on, I’m trying to do my best. . . . I’m going to try a little something different, I don’t know what it is. Physically I feel great. I have to get going mentally. When I figure it out, I’ll be fine.”

Such an admission from any athlete raises eyebrows. But when it comes from a closer  and from someone who last year depended so heavily on high-octane confidence and a lethal fastball  that can be a problem.

After Rivera blew another save three days later, Colin Stephenson wrote this in the Daily News:

“Certainly it is too early to be panicking, but Mariano Rivera now has as many blown saves (three) as he does saves, and that is hardly the kind of efficiency the Yankees expected when they allowed John Wetteland to leave over the winter as a free agent.”

Mariano Rivera, we have seen John Wetteland. You are not John Wetteland. Not yet. Maybe never. That’s not a serious criticism. Wetteland’s 179 saves over the last five years are second in the major leagues to Randy Myers’ 181.

Poor performances from Rivera and other Yankees relievers also led to a bullpen-directed mini-meltdown from owner George Steinbrenner. From the New York Times:

Steinbrenner admitted in a telephone interview that he was “upset” with the defending World Series champions for being lodged in last place, and he directly or indirectly criticized almost every pitcher in the bullpen. He also said he was unsure if Mariano Rivera could succeed John Wetteland as the team’s closer and essentially condemned himself and the Yankees by saying anyone who would not want Wetteland has limited baseball expertise.

But despite Rivera’s slow start, the aforementioned Steinbrenner rant, and the Yankees’ middling record, Joe Torre kept throwing Rivera out there. And the newly christened closer rewarded the manager’s faith. From the night of that third blown save through the end of May, Rivera pitched 14 times, allowing two earned runs 16.1 innings while converting all 12 of his save opportunities. He soon made the All-Star and finished the year with 43 saves (second in the AL and just as many as Wetteland had piled up a year before) and a 1.88 ERA.

Rivera, of course, then went on to save a record 652 games over a 19-year career and become one of the best playoff performers of all-time. He’ll be a lock for the Hall of Fame when he appears on the ballot in 2018. Not bad for a guy who would never be John Wetteland.