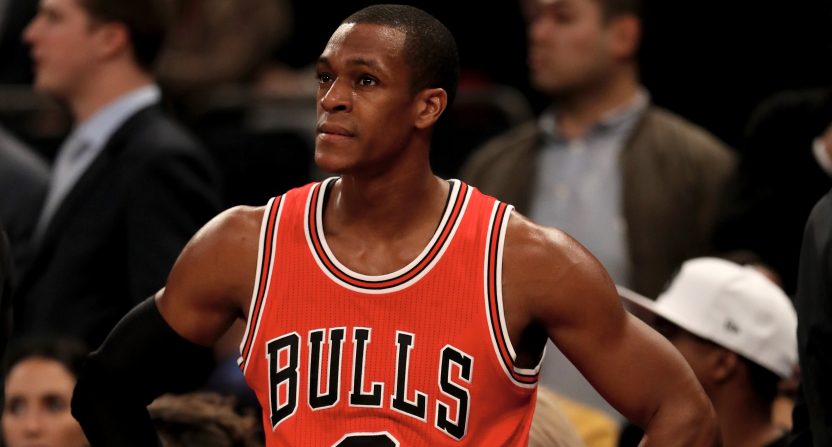 The Chicago Bulls are currently one of the most dysfunctional teams in the NBA.

Freshly signed point guard Rajon Rondo got benched, whined about it, called out his veteran teammates on Instagram and recently blasted coach Fred Hoiberg and the team’s front office. Stars Jimmy Butler and Dwyane Wade were disciplined after saying other Bulls players don’t care enough and are now reportedly ignoring Hoiberg’s play calls. Hoiberg seems to have no control over the team. And the front office is highly complicit in all of it.

Meanwhile, the Bulls are 32-35 on the season, outside the top eight in the Eastern Conference and trending in the wrong direction. It’s all a giant mess.

But not too long ago, things looked rather sunny for the Bulls. They had just added Wade, Rondo and Michael Carter-Williams in the offseason, and though that trio seemed like an odd fit in today’s space-and-shoot NBA, the results were there. Chicago got off to an 8-4 start and drew praise for, of all things, its team chemistry.

Watching the Bulls preseason games got me so hype for the regular season. The chemistry is so much better than it's been in years.

Great win for the Bulls. Thx for listening! Gar/Pax did an outstanding job this off season. Love the depth and chemistry is terrific .

The chemistry the group has. They actually seem to like each other which wasn't always the case last year. Wade has helped in this area too. https://t.co/Y9jr04mEtc

Even Rondo—who now seems to hate everyone in the Bulls organization as much as he hates to lose at Connect 4—was impressed with the chemistry.

Rondo: "Until you’re inside this locker room, you don’t understand our chemistry and how we fight for another."

An Oct. 24 article on the Bulls’ official website described how close the team was off the court, saying that “By all accounts, this is as upbeat a group as the Bulls have had together in a long time.” In the same article, Rondo talked about how important camaraderie was to him, while Hoiberg said he had a “really good” relationship with the point guard.

The Bulls are almost flawless at hitting the open man from double-teams or off dribble penetration, playing with a chemistry that’s almost too good to be true this soon in a season with so many new players.

“I’m not surprised. I think whenever you buy into it and you hang out as much as we do and we know each other the way we do, I think it helps,” Butler said. “Me and D-Wade were talking about it earlier, how this locker room camaraderie, it really shows on the floor.”

Weeks later, an ESPN feature explained that the Bulls bonded by throwing around a football given to Butler by NFL star Antonio Brown. The story, which generally portrays the Bulls as a merry, joyful bunch, included this accidentally prophetic quote from Wade:

“Small things build some kind of camaraderie. It builds some kind of something that you need. Because sometimes, especially when you’re losing, a lot of people — you lose that eye contact. You lose that communication and talking. Small things like [throwing a football] help. It helps kind of relax a situation.”

In late November, ESPN’s Nick Friedell passed along this quote from Butler:

“As much as you see guys around each other you would think we live in a dorm. The way we all leave the building at the same time, we’re all going to eat somewhere, we’re all at somebody else’s house. You would think, I don’t know [if it’s] a good or bad thing, that we are a college team. We’re always talking to each other in a group chat, competing in a video [game]. Something about this group of guys, we just always want to be around each other. We realize we’re all we have whenever we step out onto the United Center floor or an away game. It’s us, it’s these coaches, it’s this organization.”

Now, only a few months after being hailed for loving each other so much, Bulls players are seemingly at each other’s throats, and no one would use the word “camaraderie” within 100 square miles of the United Center. Either things went sour real quickly in Chicago or media members were just a little too quick to buy into the team chemistry narrative. Or, most likely, a little bit of both.