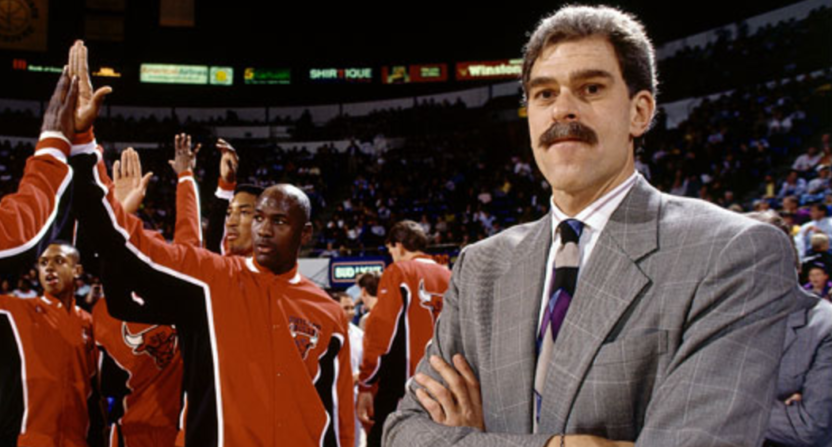 It tends to go without saying that there is a pretty good reason why sports teams do not employ fans to be the general manager. Fans often propose the most lopsided or ill-advised trades when they get their inner-GM working. You hear them all the time on sports radio, with fans trying to ship off players of little or diminishing value in the home city just to get rid of them without much regard for what the team on the receiving end of the proposed hypothetical deal would truly want in return. But that’s part of being a sport fans, and it’s been going on for decades with no caution or long-term vision.  Case in point, here’s a comment from Bulls fan Ray E. Hauch from Park Ridge, IL that appeared in the July 16, 1989 version of The Chicago Sun-Times…

With the two Jerrys running the Bulls, Michael Jordan will never wear a championship ring if he stays.

Take a trip down memory lane to 1987. Before the Chicago Bulls were winning NBA titles on an annual basis, there was the uphill climb to try and dethrone the Boston Celtics and Detroit Pistons in the Eastern Conference. Feeling rather desperate a season after seeing the Bulls get bounced in the first round of the playoffs for a third consecutive season, one Bulls fan proposed trade that would have changed the history of the NBA: a straight-up deal to ship a young Michael Jordan to Boston for an aging Larry Bird.

The Chicago Sun-Times invited readers to respond to a question about the future of the Bulls and took the pulse of the fanbase with regard to how confident fans were that the Bulls would ever get over the hump and be a championship contender. That led one fan, Phil Simpson, to recommend pulling the trigger on a Jordan-for-Bird trade.

“Yes – if they trade Michael Jordan for Larry Bird straight up. Then the Bulls  would have a team player who could lead them to the championship.”

At the time of this fan-proposed trade, Bird was 31 years old and a lock for the hall of fame with a few more good years in him, but his age was beginning to show. Bird played just six games the following season and called it a career after the 1991-92 season (well, technically, after a trip to the summer Olympics with the Dream Team). Jordan was just getting started on his hall of fame career. A year after averaging 37.1 points per game, Jordan went on to average at least 30 points per game for the next six seasons while guiding the Bulls to a three-peat in the NBA Finals. After a brief detour to pursue a dream of playing baseball, Jordan soon returned for one more dominant run that included a second three-peat taking us through a decade of excellence in the 1990s. Just imagine if Jordan had been traded to the Celtics and that fan got Bird in Chicago. Could Boston have gone on the same dominant run while Chicago was left trying to replace Bird? Boston failed to get past the conference semifinals in the 1990s and managed to miss the playoffs five times in the decade.

But before the Bulls could get there, they still had their skeptics as the young Bulls were beginning to grow. The next season, after the Bulls had been eliminated in the conference finals by the Pistons the previous postseason, the Bulls were on the right track but The Chicago Sun-Times again wanted to know what fans thought they were lacking. Two fans suggested the team lacked teamwork and a general manager. One fan echoed the calls to trade Jordan.

The Bulls lack teamwork. There are  three things that must be done  to play winning basketball: Trade all the crybabies who run to the media and say, “Play me more or trade me.” They are selfish. Trade Michael Jordan. It takes five players to win and it can’t be done with one star. There’s too much individualism and not enough teamwork passing to the open man.

The Bulls lack a GM. Jerry Krause, the so-called “Executive of the Year,” is laughable. Instead of drafting a rookie who could step in and play, he drafted Will Perdue – at best a project. Brad Sellers has never shown any rebounding or defensive consistency. Sam Vincent needs to show more leadership.

The Bulls went on to advance to the Eastern Conference Finals later that year, but they were once again ousted by the Pistons. That brought a coaching change to Chicago, with the Bulls parting ways with Doug Collins and promoting assistant coach Phil Jackson to be the new head coach. As the change was made, some fans were skeptical at best.

Firing Doug Collins was the biggest mistake Jerry Reinsdorf has ever made. Collins knows talent and should be general manager instead of Jerry Krause.

Phil Jackson is a nice guy. But the availability of Hubie Brown and Dick Motta makes him a bad choice. Jerry Krause has made a Michael Jordan golf championship more realistic than an NBA title.

Phil Jackson might be a good choice as a replacement. But why replace Collins with one of his own assistants? What will or what can he do differently? Nothing, other than keep his mouth shut off the court and be like a puppet with Jerry Reinsdorf and Jerry Krause maneuvering the strings.

These voices and calls for dramatic change may have been in the minority, and fortunately for the Bulls there were better days ahead that likely turned these fans back in favor. Wonder how many of these fans were wearing a Jordan jersey at any of the six championship parades through Chicago?

Stephen A. Smith was approached about running for Senate: “I would piss off millions.”