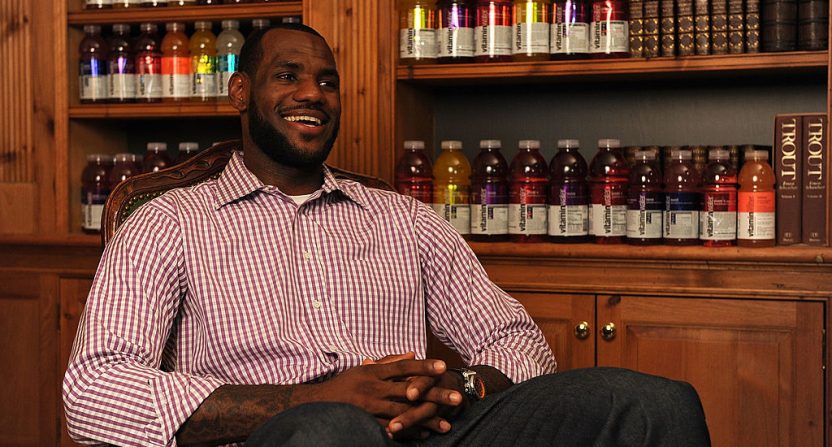 During LeBron James’ “The Decision” free agency in the summer of 2010, tons of teams tried to land him, including the Chicago Bulls. After James chose the Miami Heat and led them to the Finals that first year, but lost in six games to the Dallas Mavericks, Chicago Sun-Times columnist Dan Cahill delivered a spicy hot take, arguing that it worked out better for the Bulls to not land LeBron.

Cahill’s take was outrageous at the time, considering that James had won league MVPs in 2009 and 2010 and led two different teams to Finals appearances, but it looks even sillier now considering the state of the Bulls and the success James has since found (NBA titles with Miami in 2012 and 2013 and with Cleveland in 2016, plus further Finals appearances in 2014 and 2015, three Finals MVP awards and two further league MVP awards). Cahill’s piece doesn’t seem to be accessible online any more, but here it is, via NewsBank. Let’s take it apart, piece by piece:

Looking back on things, maybe it was best that LeBron James took his vast talent and ego to South Beach and not Chicago.Around this time last year, it seemed like such a good idea for the Bulls to acquire the King of all free agents. Heck, most Bulls fans would have relinquished the Michael Jordan statue and a Willis Tower to be named later just to see No. 6 in Chicago.A year ago, when I wrote 10 reasons why LeBron would not come to the Bulls, readers responded with such vitriol that I thought I would be subjected to a public goring performed by Benny the Bull.I wonder how those people feel about it now.

Hey, if those people were smart, they would feel exactly the same way as they previously did. Nothing LeBron did in 2010-11 (including figuring out how to gel with a new team and leading them to a 58-24 mark and a Finals appearance) suggested he wouldn’t be a great fit for any team in the league.

Let’s play the hypothetical “what-if” game for a second …Let’s say the night of “The Decision,” LeBron leaned into Jim Gray and uttered the words: Chicago Bulls.The city would have been up for grabs. My guess is, the Bulls’ front office—against their better judgment—would have caved into LeBron’s posse and held some sort of party, similar to the Miami Thrice shindig.

Soon after, the other 47 contiguous states would have revolted and Chi-Town would have its first Public Enemy No. 1 since Al Capone was pouring moonshine. Our six-time NBA Champion Bulls would have become America’s punching bag. All the previous work of Johnny Kerr, Jerry Sloan, Norm Van Lier, Jerry Reinsdorf, Jerry Krause, Scottie Pippen and MJ lost in one ignominious evening.

Really? Criticism of a team invalidates their championships, and loses all their previous work? The Bulls took plenty of criticism from other parts of the league when they had Jordan and Pippen; I wonder if Cahill minded it so much then.

What about the ramifications on the floor?Our hometown hero Derrick Rose, humble player that he is, likely would have deferred to LeBron, giving him more touches, especially in crunch time. The tremendous growth and confidence we saw in Rose from his sophomore season to last season would have been stunted.

Maybe LeBron would have jelled better with D-Rose than he did with D-Wade, but Rose never would have had the chance to blossom like he did without him. No MVP. No teary-eyed mom moments. No Englewood to NBA hardwood stories.

That’s maybe half a point; Rose may not have won the 2010-11 MVP if James was on his team. But he might have, and wouldn’t you rather have a team championship than one player winning a MVP award? (And James might well have won it in this scenario, so a Bull still could have been triumphant even if Rose hadn’t won.) Moreover, having James (already a two-time MVP and a seven-time All-Star) seems much more valuable than having Rose even at that point, and that’s even more so given the turns each’s career has taken since then and the injuries Rose has suffered,

But wouldn’t the Bulls have won it all? Probably not. And, I’ll go one more: they would not have had the best record in the league, as they did WITHOUT LeBron.Just as Miami struggled to find the right chemistry all season with James, Wade and Chris Bosh, I think the Bulls would have been searching for it as well.

As great as James can be (ahem, Scottie), he’s repeatedly shown that he can’t close out big games. Against the Mavs in the NBA Finals, James was nine points below his season average and scored just 18 points in six crucial fourth quarters. I don’t ever remember that happening to another guy who shook resin dust into the air prior to each game.

It’s a valid point that James, Wade and Bosh struggled to adjust in that first season, and that the Bulls (62-20) had a better record than the Heat (58-24) did, but that wasn’t by much. The Heat also thumped the Bulls 4-1 in the conference finals, so it was pretty clear who was the better team at that point. And while some criticism can be lobbed at James’ play in those Finals, especially late in games, that’s a very small sample size to consider, and there was plenty of blame to go around. James’ playoff body of work even at that point was impressive, and it’s become even more so since then.

And did you really want to deal with all his baggage, anyway?The Decision. The party. The “seven” championships. The mom. The “r” word. And on, and on …I mean, here’s a guy who calls himself “The King” and on his locker—where everyone else has “large, extra-large, etc,”—has “king-size.” How do you think that sits with teammates?

It’s for all these reasons that he’s become the biggest sports punchline since Tiger Woods, another guy who has found winning elusive lately. “I asked LeBron for change for a dollar the other day, but he only had three quarters.”“Did you hear Ohio is holding a LeBron James Day? Everyone gets to leave work 12 minutes early.”

Yeah, “LeBron as punchline” was only partly true then, and it certainly isn’t true now. And all that “baggage” worked out just fine for Miami (and now Cleveland) in the end.

Is this what you really wanted for the Bulls and Chicago? LeBron is young enough and good enough that he might go on and win multiple championships in Miami. Then again, he might join the list of Charles Barkley, Karl Malone, John Stockton, etc. as greatest players to never win a title.

Either way, I’m just glad he’s not a Chicago Bull. I’d much prefer to deal with Carlos Boozer and his BAGgage than LeBron’s. I’m willing to live with D-Rose’s Bulls. How about you?

At least Cahill admits that James might go win multiple titles in Miami, but it’s interesting that he still is “glad he’s not a Chicago Bull” even with that caveat. The whole column feels very much like a rejected suitor screaming “Fine, I didn’t want you anyway!” It’s a rationalization of the Bulls’ failure to land LeBron and a bizarre claim that they were somehow better off without him. It was dumb at the time, and it’s even dumber in retrospect. How are those LeBron-less Bulls working out for you, Dan?