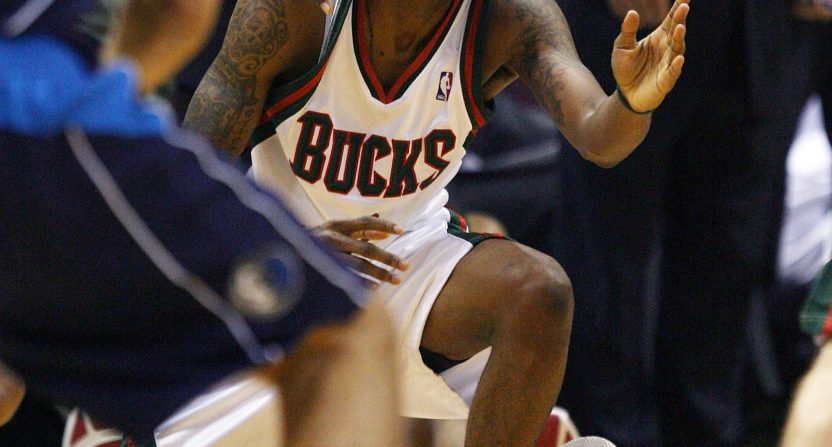 Things were supposed to be very different for Brandon Jennings by now. Instead of doing spot duty off the bench for the Washington Wizards in their current playoff run, he was supposed to be the megastar leading a team to glory.

Considered by some to be the No. 1 high school basketball prospect in the Class of 2008, Jennings had his pick of schools to attend for what was expected to be a very short college career. After flipping from USC to Arizona, Brandon shocked the basketball world by announcing that he’d go play in Europe instead until he was 19 and eligible to enter the NBA Draft in 2009.

So he did, signing with Lottomatica Roma of the Italian Serie A for $1.65 million guaranteed, as well as earning a $2 million endorsement deal from Under Armour. At the time, the successful move had a lot of people wondering if this was going to be the new model for elite recruits destined to NBA greatness. That concern was undercut somewhat by Jennings’ lackluster numbers that season (5.5 PPG, 1.6 RPG, and 2.2 APG in 27 games). Still, he was young and still learning.

That remained the thinking when he was selected tenth overall by the Milwaukee Bucks in the 2009 Draft. And that move looked like the steal of the century when Jennings debuted that season. He earned 17 points, 9 rebounds, and 9 assists in his first-ever NBA game and continued to pour on the stats in those that followed. The hype was starting to feel well earned and people were already thinking All-Star Games and beyond.

Brandon Jennings isn't even on the All Star Ballot….Blake Griffin is?? Isnt he hurt? #Bucks Fans! WRITE IN YOUR ALL STAR POINT GUARD!!!

It's too bad my hometown NBA team didn't need a PG b/c Brandon Jennings just got 32 points and 9 assists in a win.

@BDUBdadude B. Jennings is a beast I really like shorty game he gon be a star in the future

Brandon Jennings is out on the court catching Bodies every night. Nba Rookie Serial Killer! Who's getting put in the Blender next ?

@ChrisGFields: @PR2PR the knicks should be most worried about brandon jennings busting that ass for the next decade.

every time Brandon Jennings flips in a floater or buries a trey, the NCAA should cringe; he's ALREADY proven Europe a viable stage for kids

RT @cf_gardner: Charles Barkley tonight on TNT: "I picked Tyreke Evans for rookie of the year. Brandon Jennings is screwing that up."

Things truly came to a head on November 15 when, in only his seventh NBA game, Jennings lit up the Golden State Warriors for 55 points (after going scoreless in the first quarter!). Not only was he the youngest player to ever score 55 but he also broke Kareem Abdul-Jabbar’s record for most points by a Bucks rookie. As you probably guessed, a whole bunch of people started annointing the youngster right then and there.

(tell a friend to tell a friend)Bucks rookie Brandon Jennings deserves to start at the point in this years All-Star Game! (55 pts 2nite)

Remember that one time Brandon Jennings said he was better than Ricky Rubio and everyone freaked out? Um, yeah.

Brandon Jennings 55 points. Rookie of the Year. Compton. I wouldve went overseas too . Maybe I should?

How much easier would it be to see LeBron going to Knicks if Brandon Jennings was running the point?

"I take my words back about Evans being rookie of the year. I think Jennings definitely has that locked up." — S-Jax — http://bit.ly/2GhwIf

Will Brandon Jennings start a trend toward Europe over college for HS players that can't go straight to the NBA?

Charles F. Gardner of the Milwaukee Journal Sentinel noted the irony of Jennings performing so well against the Warriors, who had selected some schlub named Steph Curry with the seventh pick instead.

Much is already being written about how Jennings fell to the 10th spot in the June draft while other point guards were chosen ahead of him. One of them, Stephen Curry, had 14 points and four rebounds while playing 26 minutes off the bench for Golden State. Curry was the seventh pick.

And he wasn’t the only one pouring on the praise in print. Here’s Joel Luna of The Brazosport Facts in Clute, TX:

Those responsible for a robbery usually can expect to spend some time behind bars, but those judging the 2009 NBA Draft instead will praise the Milwaukee Bucks for stealing Brandon Jennings.

If this kid isn’t on your fantasy roster yet and still is available, pick him up.

Michael Hunt of the Journal Sentinel wasn’t afraid to lob around some serious comparisons:

I’ve heard Allen Iverson mentioned, but that’s not quite it.Jennings reminds me more of Nate “Tiny” Archibald, who, coincidentally, finished his Hall of Fame career with the Bucks.

You don’t want to put those kind of expectations on Jennings, because Archibald was one of the greatest small players ever. Maybe THE best. At 6-1 and maybe 150 pounds, Tiny could dominate a game. During the ’70s, before Magic and Bird arrived to save the NBA, Archibald was unstoppable. He was a good shooter and a remarkable passer, but it was his unmatched quickness that made opponents pick their poison – often incorrectly.

If he keeps his head screwed on as straight as it is right now, the 20-year-old point guard could become one of the NBA’s all-time greats.

That’s a big if in the NBA, where money, fame and success have a way of turning players’ heads. But Jennings is no ordinary rookie.

“There were some safer picks,” Hammond said. “There was a perception about Brandon that he was a little bit of a maverick for what he did. That was not the case. He’s a grounded kid.”

For now, it’s enough that the Bucks took the risk others were unwilling to assume and might have won in a very big way.

There’s no question in my mind he’s already as good as anybody. I’m not going to say he’s better than the other rookies — the point guard situation in this draft is very good. But to hear the pontificates stand up there and analyzing … there’s no history. If they want to tell me about these great [college] coaches coaching these Hall of Fame guys. How many of those players never make it? What they’ll never do is tell you how many of the players from those great programs never make it.

And Jennings’ early success was proof positive to some thatthe Europe-to-NBA route was the way to go from now on.

Jennings and his early success may have rendered the NBA’s ridiculous age-limit rule totally irrelevant, and maybe we can get past the notion that players are better prepared after playing one year in college.

…It’s better to scrap the age-limit rule and let him play right away or take the alternative route of Jennings and go to Europe where his game can see real growth and development.

Whether there’s a correlation between Jennings decision to go to Europe instead of college and the way his NBA career has gone since is up for debate. But what we do know is that after that initial success, Jennings had some very good seasons for the Bucks but never quite fulfilled the expectations heaped on him above. He would be named to NBA All-Rookie First Team in 2010 but he never did make an All-Star Game. Injuries cut into his second and third seasons, though he did finish that third year with a 19.1 scoring average in 66 games.

When free agency came calling after his fourth year, he turned down an extension with Milwaukee and was  signed-and-traded to the Detroit Pistons where his production tapered off thanks in part to a ruptured left Achilles tendon that derailed the 2014-2015 year. After that, stints with the Orlando Magic and New York Knicks have led him to Washington where he’s providing minutes but not much else.

Jennings never became the next Iverson or “Tiny” Archibald for that matter. Still, we’ll always have the hype that a couple NBA games gave him and us.