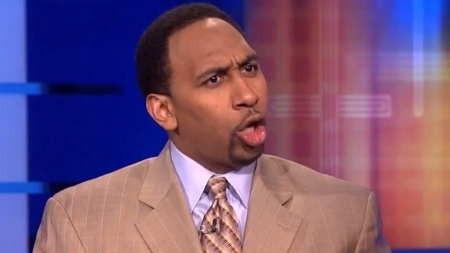 Part of trusting the process in Philadelphia has relied on some luck with the ping pong balls in the NBA Draft Lottery. In 2015, the balls did not quite help out the Sixers they way the franchise had hoped, but landing the third overall pick still netted them Jahlil Okafor. With there still some questions about the future stability of Joel Embiid, the addition of Okafor seemed to be a solid Plan B.

One of the vocal critics of the Trust the Process movement in Philadelphia has been Stephen A. Smith of ESPN, who just so happens to have been a big fan of Okafor dating back to his college days…

"I can't find four big men in the National Basketball Association with some of the moves that {Jahlil Okafor} has," @stephenasmith.

Tonight Jahlil Okafor showed why he should be the No. 1 pick. http://t.co/DwEIHY6r61

“When I think about Jahlil Okafor, I think of the number 1 pick in the draft and I don’t think twice about it. That kid is too skilled as a big man offensively for me to sit there and pass on him, the things that he has, you can’t teach.  The way that he has them.  I’m not just talking about just his footwork, I’m talking about how natural it comes to him. The fluidity in his offensive game, his repotoire.”

“Im rolling with the big boy Okafor…Jahlil Okafor is the REAL DEAL as a big man.  You do not teach the offensive repitoire that this brother has to his game.  His footwork is sensational, he’s got a nice touch, he can score, and let me tell you something, he plays BIG.”

Okafor ended up going third overall to the Sixers behind Kentucky center Karl Anthony-Towns and D’Angelo Russell. Despite the majority of experts declaring that Towns, who had a sensational NCAA Tournament, was the clear top choice, looking at Smith’s takes leading up to the draft, you can imagine he thought the Sixers got a bargain.

Second game in a row Karl Anthony-Towns is on the bench. Don't want to hear about him being No.1 overall pick over Okafor if he's on bench

I'm not questioning Towns' usage. I'm aware of how Cal uses him. I'm just saying THIS IS THE TIME when I want to see if he's No.1 or Okafor.

Not to me @Jonjan0314David. You can't teach/develop what Okafor brings offensively. I'm rolling with that.

I love Anthony-Towns……..the No.2 overall pick. But I'm rolling with Okafor. Y'all will see.

“I still believe you don’t teach what he has. You know you’re 6’11, 7 feet tall, you’re a big body, you got trunks for legs,  you’ve got great hands, big soft hands. You know, you can make shots. You’ve got an offensive repotoire that is unrivaled by any big man in the game of basketball…I’m just a guy that I don’t believe you find a Jahlil Okafor everyday.  I think he’s a once in a generation kind of talent. I think what you saw last night, and what you saw at some points this season is nothing compared to what you are going to see when he enters the next level.”

During the draft, after the first two picks, Smith, who was on vacation at the time, started to get a little antsy about the possibility of Okafor falling down a little more so his favorite team, the New York Knicks, could draft him…

The Sixers, not heeding Smith’s desires, drafted Okafor, much to Stephen A’s dismay…

Philadelphia has since struggled to find a consistent role for Okafor on the floor. The Knicks ended up selecting Kristaps Porzingis, who has turned out to be a rising star, with the fourth pick.  Stephen A. was, to put it mildly, unpleased…

I'm done. I'm just done. I'm turning the draft off right now. I know Porzingis can play, but we don't see the next coming of Andrea Bargnani

Phil Jackson evidently has no regard for the long-time suffering of NYers, nor @carmeloanthony for that matter. Melo's been used. PLAYED!!!

and there are players like Winslow and Mudiay who can do things for you right now? Clearly, he thinks he's earned our trust as an exec.

And clearly he's oblivious to his own record in NY. He's lucky if Melo hasn't already called and asked to be traded. & he'd better show up

In Free Agency and get some talent on this roster. #Damn! Damn! Damn!

And Yes, I'm on vacation. But damnit, who cares! I'm calling @SportsCenter to come on tonight. I cannot let this pass. I just can't.

Now, the Sixers are potentially inching closer and closer to trading Okafor away to New Orleans. Maybe if the trade goes through, Okafor will be given a chance to start fresh and start living up to the hype placed on him by Smith.