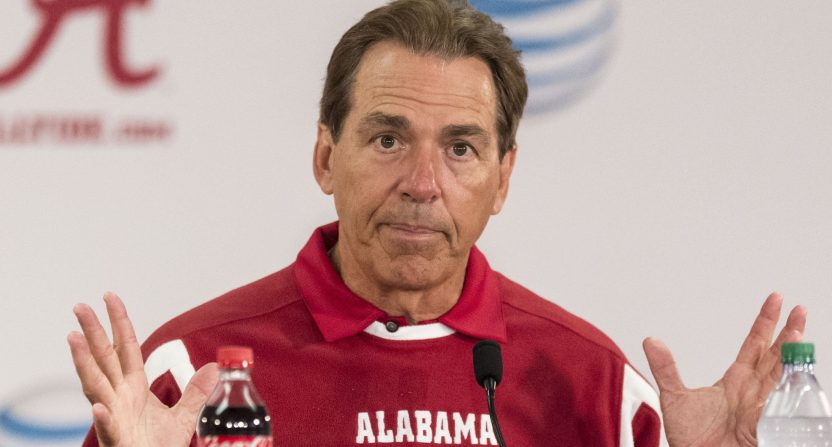 Alabama announced this week Nick Saban was getting a contract extension and will be paid over $11 million this season. To some, the price to pay Nick Saban is worth the expense given the results he has produced on the field, resurrecting Alabama as a true dominant power not just in the SEC, but also the nation. Saban has brought four national titles to Alabama since his hiring after the 2006 season.

Alabama regularly recruits the top classes every recruiting season, is the annual favorite in the SEC and considered a top national title contender every fall, and then sends a large number of players through the NFL Draft in the spring. Saban has built a true football factory in Tuscaloosa. Imagine, if you can, that Alabama wasn’t turned down by another coaching candidate that was sought by Alabama; Rich Rodriguez.

Go back to the 2006 season. Rodriguez was doing great work in Morgantown, West Virginia. West Virginia was coming off a second-straight season finishing in the top 10 of the AP poll, and the Mountaineers flirted with a potential BCS championship bid in 2005 and looked like a threat again in 2006. Rodriguez was on fire and had the offensive flair some felt Alabama was in desperate need of obtaining. They sure tried to get him, but Rodriguez was the one who rejected an offer from the Crimson Tide and chose to stay at West Virginia for one more season until he left prior to the conclusion of the 2007 season after accepting a coaching offer from Michigan. Alabama fans would go on to watch what happened in Ann Arbor during the Rodriguez era and would in time come to breathe a huge sigh of relief.

“Now What?” was the headline in the Times Daily after Rodriguez said no to the Crimson Tide. Alabama’s coaching search was coming up dry and as each day passed it appeared Alabama was going to have to settle on a coach rather than get their desired pick. Other supposed targets for the job included South Carolina’s Steve Spurrier, Cal’s Jeff Tedford, Navy’s Paul Johnson, and Wake Forest’s Jim Grobe. Check out this fancy graphic from the Times Daily that didn’t stand the test of time very well.

As you know by now, the focus shifted back on Miami Dolphins head coach Nick Saban, and that worked out very well for Alabama. But as the movement to lure Saban away from the NFL for the Alabama job continued, there were plenty of critics. At the time, Saban had own a national title at LSU and followed that up by a rough go at coaching in the NFL. It seemed the shine of Saban was gone thanks to his time in the NFL, and that served as the point of emphasis for many doubters, including Philadelphia Inquirer columnist Frank Fitzpatrick…

Quote by @philafitz from his @PhillyInquirer Morning Bytes column about Nick Saban the day after #Bama hired him. pic.twitter.com/6z9623pxYL

Another person who felt Saban would live to regret a return to the college game after leaving the Dolphins? None other than Lou Holtz, as quoted in The Miami Herald in 2007;

“I think Nick Saban’s a terrific coach and a smart man, but if he’s anything like me, he’ll regret the decision to leave the Dolphins like he did,” Holtz said by phone Friday. “I still regret leaving the Jets to this day because the owner, general manager, players and fans put their faith and confidence in me, and I did not see it through. I didn’t give them my best effort.

“I’m not criticizing Nick Saban’s decision. I’m just saying that I regret quitting to this day because I was unfair to the people who had faith in me, and he might feel the same some day.”

If nothing else, we learned Saban must be nothing like Holtz. And given that Saban has remained at Alabama for as long as he has now when possible overtures from the NFL could have been floated, I’m just guessing he doesn’t have any regrets about the NFL to this day.

But when it comes to takes that have not aged well over the duration of Saban’s time at Alabama, Jeff Schultz of The Atlanta Journal-Constitution takes the cake.

Like many, Schultz suggested Saban picked the wrong place to jump back into college coaching…

But know this about Saban: He was miserable in the NFL, and in time he’ll be miserable in Tuscaloosa. Perhaps college football is where he belongs, but he picked the wrong place at the wrong time to ease his throbbing temples.

Schultz later said Alabama was the No. 2 job in Alabama behind Auburn (in fairness, arguably a fair point at the time), and could be in danger of slipping to No. 3…

Alabama used to be a top 10 job. Today Alabama is a cartoon. It’s symbolic of everything that is wrong about college athletics. (Most recent evidence: giving $32 million to a football coach). Saban is the Crimson Tide’s seventh coach since Bear Bryant left. He’s the fifth in eight years (counting Mike Price, who held the position only for an offseason of lap dances).

Alabama is now the second-best job in the state behind Auburn. And Troy’s closing on No. 2.

Schultz suggested Alabama was nothing more than a middle of the pack program at best.

There are at least five schools in the SEC with more strength, stability and promise: Georgia, Florida, LSU, Tennessee, Auburn. (Alabama gets the edge over South Carolina only because of the alphabet.)

Saban’s record against Georgia, Florida, LSU, Tennessee, and Auburn since becoming head coach of the Tide is 34-8, including a 3-1 mark in the SEC Championship Game and 1-0 in the BCS Championship Game.

It’s impossible to say what would have happened had Rodriguez accepted Alabama’s offer back in 2007. Just because things didn’t work out at Michigan doesn’t mean they would have been a bust at Alabama too. Rodriguez is now at Arizona after a brief stint in the TV booth after being let go by the Wolverines (to clear the path for Brady Hoke, who has since been replaced by Jim Harbaugh. Meanwhile, Saban is still at Alabama and gearing up for another potential run to a national championship.

It’s safe to say whiffing on Rodriguez may have been the best thing that ever happened to Alabama, and few people thought that 10 years ago.