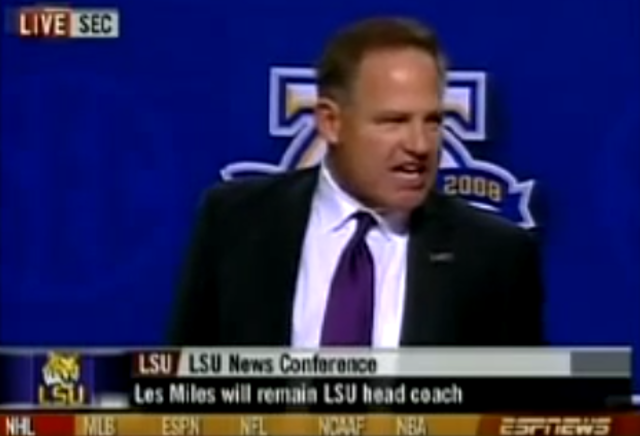 The Charlie Strong – Ed Orgeron – Tom Herman coaching circle the past few weeks led to a bunch of false reports and bad predictions, but it’s far from alone. The amount of coach movement we see in NCAA football annually and the nature of negotiations with people under contract elsewhere, plus the pressure to break stories and be first (especially for those recruiting-focused sites that charge memberships) means there are always a lot of rumors and reports that don’t wind up being true. Sometimes, they jump the gun on negotiations that later collapse; other times, there doesn’t seem to be much to back them up at all. Here are some of the best ones from the past decade, in chronological order:

Les Miles to Michigan (December 2007): This is one of the all-time classics, as the reports hit full steam while Miles’ LSU team was preparing for the Dec. 1 SEC championship game. Earlier that day, on ESPN’s College GameDay, Kirk Herbstreit came out and emphatically said “We know Les Miles will get a chance to talk to Michigan, what I’ve found out from a source is that he’ll be announced as the new head coach at the University of Michigan”:

Herbstreit also said that “Jon Tenuta, the defensive coordinator (from Georgia Tech), in my mind the best in the country, will be coming along with him.” Nope on both counts; Miles stayed at LSU, Tenuta went to Notre Dame. But this led to a tremendous moment before the SEC championship game where Miles refuted the rumors, called Herbstreit out, and delivered perhaps the best “Have a great day” walkoff ever:

David Cutcliffe to Tennessee (January 2010): Given that Cutcliffe found success as a long-time assistant with the Volunteers (from 1982-1998), suggesting that he might return to Rocky Top in the wake of Lane Kiffin’s exit wasn’t necessarily ridiculous. Although Duke only went 5-7 in 2009, that’s not terrible for that program, and a guy with program loyalty might have seemed appealing at that point. However, several North Carolina TV stations and Tennessee newspapers went well beyond suggesting in January 2010, declaring that Cutcliffe was headed to UT:

WFMY-TV in North Carolina reporting that David Cutcliffe will be hired as new Tennessee #Volunteers head coach. This is the correct hire.

The next day, January 15, Cutcliffe officially took his name out of consideration:

Swing and a miss there. Props to the News-Sentinel for their minor hedge, at least? Cutcliffe stayed at Duke, where he’s found even more success, including a conference division title in 2013. Next up, a media man…

Jon Gruden to Miami (November 2010): We could fill a whole post with erroneous Gruden reports, as he’s been linked to just about every job in existence, but one of the best comes from the idea he’d go coach The U in 2010:

Gruden remains an ESPN analyst to this day, but is still somehow always linked in coaching rumors. The Miami job wound up going to Al Golden, who we’ll see later on here. First, though, let’s go back to the SEC.

Gus Malzahn to Vanderbilt (December 2010): The Auburn Tigers were rolling in 2010, their second year with Gene Chizik as head coach and Malzahn as offensive coordinator, and their first with eventual Heisman Trophy winner Cam Newton as quarterback. That led to a lot of speculation about Malzahn moving on, and it became more than speculation for a few reporters:

Reports: Gus Malzahn has agreed to become the next head coach at Vanderbilt University.

Not so much. Malzahn stayed at Auburn, helped them to a BCS championship that year, stuck around for another season and then left to become the head coach at Arkansas State in 2012. He then came back to Auburn as head coach in 2013 after Chizik’s firing, and is still there. He told reporters in 2012 he turned down Vanderbilt in 2010 to focus on the national championship game:

Mario Cristobal will be your new Rutgers coach.

Bruce Feldman and Pete Thamel then shot this down:

The reports out of NJ that FIU coach Mario Cristobal will be next coach at Rutgers are "NOT TRUE." He is staying at FIU.

Source: Cristobal staying at FIU. He will not be the next Rutgers coach.

Brett McMurphy went on to provide details of why the Cristobal move fell apart:

Cristobal did stay at FIU, and was fired after they went 3-9 in 2012. He then went on to Miami as a tight ends coach, before leaving after six weeks for Alabama, where he’s currently the offensive line coach. Flood did wind up getting the Rutgers job, and was fired in 2015. The Scarlet Knights are now coached by Chris Ash.

Butch Jones to Colorado (December 2012): After impressive tenures at Central Michigan and Cincinnati, Butch Jones seemed on the way up to a big-name school. However, in December 2012, The Denver Post got the school he’d leave for very wrong:

That one was quickly shot down within 20 minutes:

Just reached out to Butch Jones, who said any report of him taking the Colorado job is "absolutely false."

Jones went on to take the Tennessee job that offseason, where he remains (perhaps for the time being).

Al Golden will tell #Hurricanes today that he has officially accepted #PennState job, per @AndySlater. He was a #PSU captain as a player.

That did not happen. Penn State hired James Franklin, who’s still there and has the Nittany Lions at 10-2 and with a spot in the Big Ten championship game. Golden stayed at Miami, went 6-7 in 2014 and was fired after a 58-0 loss to Clemson in 2015 dropped the Hurricanes to 4-3. He’s currently the Detroit Lions’ tight ends coach. For yet another Florida one, there’s…

Dino Babers to UCF (November 2015). After George O’Leary resigned following Central Florida’s 0-8 start to the season and the team finished the year 0-4 under interim head coach Danny Barrett, there were plenty of questions of who would step in to coach the Knights full-time. Babers seemed like a reasonable candidate; following experience as an assistant at the likes of Arizona, Texas A&M, Pittsburgh, UCLA and Baylor, he went 19-7 as a head coach at FCS Eastern Illinois, then jumped to Bowling Green and led them to 8-6 and 10-3 marks. That led to these reports:

I'm told Dino Babers deal with UCF is done, but he did not want the news getting out with Bowling Green playing for MAC title. #fox35

According to @247Sports' @RyanBartow & @joshnewberg247, Dino Babers is the successor to George O'Leary at #UCF: https://t.co/cv92EpHaHB

Of course, that didn’t happen. Bass later tweeted that the 247 guys didn’t say Babers had signed, though:

So they’re not as wrong, but “expected to be” is still pretty bold for something that didn’t turn out that way at all. Let’s finish off with a very recent one…

Chad Morris to Baylor (November 2016): Morris has had an impressive coaching rise over the past few years, serving as one of the top-paid assistants in the country as Clemson’s offensive coordinator and quarterbacks coach from 2011-14 and then taking SMU from 2-10 in his first season, 2015, to 5-7 so far this year. That led to a lot of speculation he’d head to a bigger job, and with Baylor open (and the Bears’ desire for another coach who could bring the offensive firepower they had under Art Briles evident), some people more than connected the dots:

However, Morris was critical of that report:

Morris’ denials weren’t enough to stop this train, though:

#SMU coach Chad Morris told me it's "just rumors" but a #SMU source confirmed Pat's tweet. I was told Morris to Baylor is 95% done. @NBCDFW https://t.co/F4UutTIymr

Until it didn’t arrive in the station:

Chad Morris to #Baylor looked like sure thing last week. Now, sources tell me it still could happen but it's becoming less & less likely

And a SMU source has now said it’s “business as usual” for Morris. Some of this gets a bit of a pass, as Scruggs’ tweet in particular says “95 per cent done” (and a snag in the final 5 per cent may well be what happened here, especially as this seems to have been largely about price), and maybe even “agreed in principle” works (although if the sides were far apart on money, that doesn’t feel like an accurate description either). This also does seem to be one that came very close to being true. It wasn’t, though, and thus, these reports are consigned to the cold takes bin of history. They have a lot of company there.