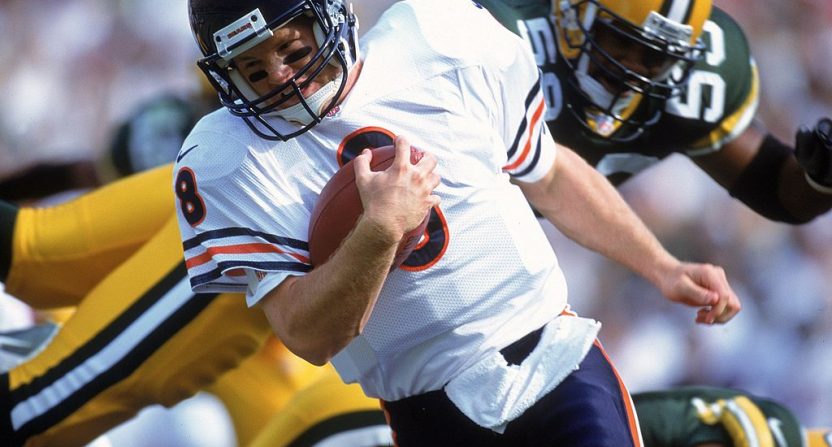 Entering the 2017 NFL Draft, the Chicago Bears are once again in a quarterback quandary. What else is new? Not since the days of Sid Luckman and maybe Jim McMahon have the Bears actually had a reliable signal caller that fans could hang their hat on.

Jay Cutler was close to being that guy, but will be long remembered much more for the frustrating, emotional roller coaster he led fans on rather than his litany of franchise passing records. And the fact that he ultimately never led the Bears to the Super Bowl.

The Bears will enter this year’s draft saying goodbye to Cutler and hello to “Ultimate Stopgap Quarterback” Mike Glennon. In spite of the bucks being paid to Glennon, it hasn’t reportedly ruled the Bears out from taking another top pick on a quarterback.

So what better time to look back on one of those occasions when Chicago thought they had found the answer under center only to be so woefully disappointed?

We take you back in the Cold Take Time Machine to April 18, 1999. That’s when everybody’s favorite sportswriter, Jay Mariotti, wrote a piece entitled “A-O-Cade: Bears finally get it right with a gutsy draft choice.” And just who was Mariotti proclaiming to be a potential franchise savior?

Finally, a lightning rod. Finally, a rallying force. Finally, right down to the assertive swagger and the cocksure words and even the brief friendship with a reputed mobster, Chicago can look at a young football player and see itself again.”The sky,” Cade McNown said, “is the limit.”

And no one laughs.

He is the quarterback we clamored for, the potential savior cut in a city’s battling image. Listening for a change, not only to the people but its own creative instincts, the new Halas Hall delivered McNown on a blurry day that began to restore faith in the local football franchise.

Oh man, where to begin… McNown was the last of five QBs taken in the Top 12 picks of the 1999 draft. Two of them had what could be called good careers in Donovan McNabb and Daunte Culpepper. Three of them were busts – McNown, Akili Smith, and Tim Couch.

As hard as it may be to believe, McNown might have been the worst bust of the three. He lasted just two years in the NFL while Smith and Couch made it four and five years respectively. McNown ultimately lost his job in 2000 to Jim Miller and Shane Matthews. He was then traded for a sixth round pick to the Miami Dolphins and never played another down in the NFL. He threw just 16 TDs and 19 INTs and had a 3-12 record as a career starter.

Too bad Mariotti couldn’t see into the future when he mentioned McNown in the same breath as McMahon, Brett Favre, and Doug Flutie.

He’s daring. He’s poised. He’s a clever playmaker, a mobile thinker who will turn Soldier Field into Sunday at the Improv. He’s fun, cool, a comeback artist. He’s a student who knows enough about the game that he reminded us the Bears are “a charter member of the NFL.” He’s a savvy media creature who said he has watched “Brian’s Song” and admitted to crying. He’s a leader who will do anything to win, driving himself to such exhausted extremes he once vomited after a play, ascenegrosslycaptured in a Sports Illustrated photo.

“I try to leave everything on the field,” he said, smiling over the memory. “I would sign pictures that way when they were sent to me. I know it was kind of a tasteless picture, but I don’t think twice about baring it all. It’s war out there.”

Best of all, he is “someone who can beat your butt.” Such was the raw assessment of Trader Mark Hatley, the personnel poohbah who boldly dealt downward and prayed McNown would be there at No. 12. When was the last time the Bears had anyone who could beat your butt? Someone so adept at reading defenses and seeing the field that he is capable of stepping in right away? He’s a slice of Jim McMahon, of Brett Favre, of Doug Flutie, of Boomer Esiason in that they’re both lefties. So what if he’s barely taller than half the neanderthals in the stands at 6 feet, five-eighths of an inch?

To make this all even better, in the same column Mariotti ripped the Colts for making a “hideous mistake” by drafting Edgerrin James over Ricky Williams. James made four Pro Bowls and was named to the All-Decade Team of the 2000’s.

At least McNown made something of his post-football career. At last check, he became a Senior Vice President at a California investment company. Jay Mariotti hosts a one star podcast with Woody Paige. Advantage McNown!