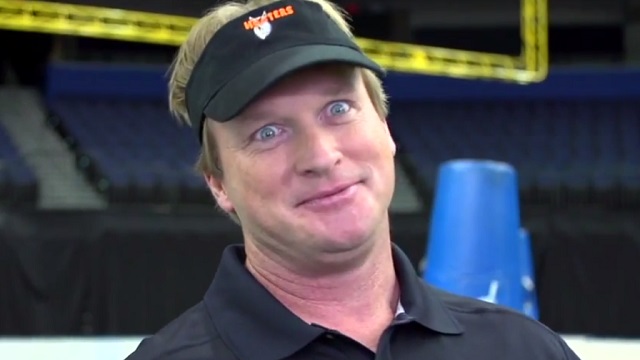 ESPN Monday Night Football analyst Jon Gruden loves everyone, but he really loves quarterbacks, and that sometimes causes problems for him. Gruden has had lots of misses as a draft analyst over the years (of course, even actual draft analysts miss too, but Gruden seems to miss more than most), and one of his most infamous comes from his urging the Oakland Raiders (a team he used to coach, of course) to take Johnny Manziel fifth overall in 2014 rather than Khalil Mack.

The Raiders chose Mack, who’s had a great first few seasons, has been picked as a two-time All-Pro, and was named the AFC West defensive player of the year by ESPN.com’s reporters this season. Meanwhile, Manziel is out of football, dealing with substance abuse issues, and taking college classes again.  With that in mind, it’s worth looking back at Gruden’s Manziel and Mack comments from the draft in May 2014.

Before the 32nd pick in the draft, when the Vikings traded up for Louisville QB Teddy Bridgewater, Jon Gruden said, “Bridgewater’s a guy we haven’t talked about enough.”  Gee, I wonder why that could have been.  Maybe Bridgewater went unnoticed because you were fawning over Johnny Manziel for every single pick!

Gruden’s love of quarterbacks is well known, but he took it to unforeseen levels on Thursday night with Johnny Football.  As the first round went on, it reached the point of comic relief.  From Pick #1 all the way to Pick #22 Jon Gruden acted like he was getting paid per Johnny Manziel mention.  It actually made me think the two had some sort of secret financial arrangement we didn’t know about.  Gruden actually said this while the Bucs were on the clock at #7:

“If they pick Johnny Football, I might have to reapply for my season tickets. I would love to see my hometown Bucs take Johnny Football, we need a kid like this to bring juice back to our organization.”

And this went on for all night.  You knew ESPN was going to obsess over Manziel, especially if he lasted for more than half of the first round.  And like a lot of the network’s celebritizing habits, ManzielMania turned into gluttony very quickly, dominating the entire telecast.

Even after the Raiders picked Mack, Gruden talked about how raw he was and said they should have gone with Manziel:

ESPN’s Gruden, a former Raiders head coach, said Mack is a promising pass-rusher who’s raw “in space” as an outside linebacker.

“He reminds me of Sio Moore,” Gruden said of a Raiders sophomore.

According to NFL Network’s Ian Rapoport, Gruden’s Manziel promotion went beyond just on-the-air, and even suggested he might return to coaching with the Raiders (who were still coached by Dennis Allen at that point) if they picked Manziel:

According to three sources, Jon Gruden spent round 1 of the draft imploring the #Raiders: Draft Johnny Manziel. Just imagine #whatif

Jon Gruden told one close friend: “If there is one job I’d come back to the @NFL for, it’s the #Raiders.” But will he leave his current job?

As Awful Announcing’s Matt Yoder noted at the time, that report is highly problematic:

This report opens up a ton of questions for Gruden and for ESPN.

It’s one thing for an analyst to have an opinion and cover a sport objectively, it’s quite another for that analyst to actively try and have an influence over what happens.  To think that Gruden was trying to analyze the draft while trying to get one of his former teams to pick his favorite player is truly astounding.

Not drafting Manziel and not hiring Gruden worked out just fine for the Raiders, though. They got Mack at #5, and he’s not only been a two-time first team All-Pro and a two-time Pro Bowler (plus the first guy ever selected to the Pro Bowl at both defensive end and outside linebacker in the same year), but a key force in their resurgence. They also chose Derek Carr in the second round of that 2014 draft, 36th overall, and he’s turned into a much better quarterback than Manziel. Meanwhile, the Raiders turned to Jack Del Rio in 2015 after firing Allen, and they went 7-9 last year and 12-4 this year. It looks like they made the right call.

Of course, Gruden was far from alone in his draft night criticism for the Raiders, with even former baseball star Aubrey Huff chiming in:

Congratulations Raider nation you just went from 4 wins last year to 4 wins next year! Need a diff maker and Manziel was it. Not Mack! Ahhh

Lots of others weighed in with similar thoughts, too:

With the #5 pick, the #Raiders select Khalil Mack, LB out of Buffalo. Lot less scary than Manziel for the #Chiefs #hey610

I've seen Khalil Mack be neutralized A LOT. Not co-signing the #1 overall narrative. Puzzled, actually, by the intense hype. #NFLDraft

Mack is a solid pick, but Raiders will regret not taking Manziel. They can make it up to me by taking Aaron Murray. I will buy his jersey.

There were some who opined on Mack prior to the draft, including:

Am I allowed to laugh at this? RT @JoeBucsFan: So Mayock says Khalil Mack over Jadeveon Clowney? Steve Spurrier may be on to something.

Let’s sum it up with Joe Schad’s transcription of Gruden’s comments later:

Jon Gruden wanted Manziel on Raiders: "Everyone must know something I don't."

Not everyone, Jon, but some people, including Oakland GM Reggie McKenzie, definitely knew something you didn’t.