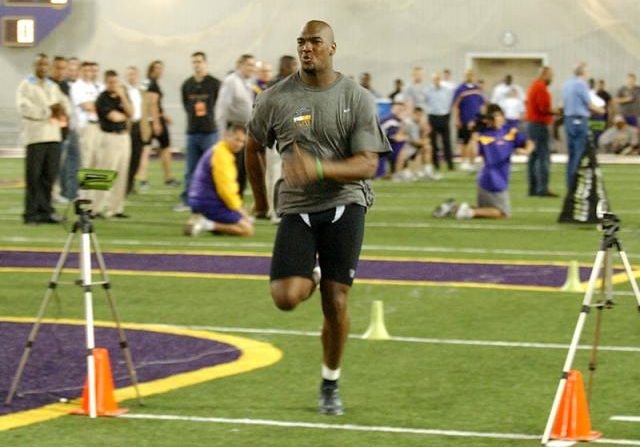 Some players can take huge advantage of the narrative surrounding their future outlook at the NFL Combine, but once everyone leaves Indianapolis the focus quickly shifts to pro day workouts for many for the top draft prospects heading into the NFL Draft. Pro days are often seen as a more comfortable environment for prospects, which is why they sometimes perform better in front of the scouts and coaches in attendance. That also leads to a more enhanced scouting profile that can bump a player’s perceived draft stock.

But just like the NFL Combine, sometimes these pro day workouts lead to some inflated positive reviews that ultimately are deflated once that player takes the field, and it works both ways. The opinions on pro days are easily forgettable, but thankfully the internet allows us to easily go back in time and see which pro day reviews ended up buying in when they should have been selling hard. Oh my, are there plenty of fantastic examples to choose from. Few positions have been victim of overzealous pro day reporting as much as quarterbacks.

Gil Brandt of NFL.com was a big fan of what he saw from Missouri quarterback Blaine Gabbert in 2011. At the time, Brandt was not alone in having a positive opinion on the Tigers quarterback. Gabbert was being viewed highly because he was coming off a good run at Missouri in a year that appeared to be rather shallow in the quarterback depth in the draft. Cam Newton was the headliner in the draft, but some were going so far as to suggest Gabbert was worthy of being the first quarterback off the board, maybe even with the first pick in the draft. Here is how Brandt summed up his thoughts after observing pro day workouts for both Newton and Gabbert at the time;

His workout was outstanding — much better than Cam Newton’s at Auburn’s pro day on March 8. Newton had six passes that were uncatchable at his workout, although it was outdoors in windy conditions. I wrote after Newton’s workout that he should go No. 1 to the Panthers. I’m not so sure now.

Personally, I don’t think you could go wrong with either one of the quarterbacks. As Bucky Brooks explained in his War Room Debate comparing the two, it’s going to come down to the scheme each QB-needy team runs and which quarterback is the better fit.

Gabbert wasn’t the only quarterback being pumped up during that draft season. Washington quarterback Jake Locker was also receiving high praise following his pro day.

One scout describing jake locker's pro day: "He ripped it." Completed 38 of 40 passes.

Both Locker and Gabbert went in the top 10 of the 2011 NFL Draft, with Locker going eighth overall to the Tennessee Titans and Gabbert going 10th to the Jacksonville Jaguars. Within the next four years, both teams went on to draft new franchise quarterbacks. The Jaguars used a third-overall pick in the 2014 draft to select UCF’s Blake Bortles. The following season the Titans used the second overall pick to draft Marcus Mariota. During this timeframe, Cam Newton has won an MVP and taken the Carolina Panthers to a Super Bowl appearance. That Super Bowl may not have gone well, and Newton has had his down moments at times, but the Panthers clearly made the best quarterback choice in 2011, while the other top 10 QBs off the board are now resigned to backup status at best.

And speaking of Mariota, remember how the pro day for the Heisman Trophy winner was received? It was not too positive.

Mike Mayock on Marcus Mariota's Pro Day: "I thought it started a little rough and I thought he was a little nervous."

Mayock on Mariota's Pro Day: "At best it was just a solid workout."

Charley Casserly after Mariota pro day: "Not a sure thing. If you're going to take him, you've got to hold your breath."

If #Titans felt same way about Marcus Mariota's PD as a lot of onlookers did, they can't take him at 2. I don't care how nice a guy he is

As mentioned above, the Titans did take Mariota with the No. 2 pick in the 2015 NFL Draft, and it would seem that is proving to be a good decision. But considering Mariota had thrown at the NFL Combine just months after being a bit banged up in the College Football Playoff championship game by Ohio State, Mariota was fair to be criticized for his performance. He even got in on the criticism.

Mariota on his Pro Day performance: "I thought it went OK. There were some misthrows here and there."

Ultimately, a “solid at best” pro day was nothing to take away from Mariota’s draft stock, and that is hardly an effect of teams overvaluing quarterbacks in the draft. Mariota’sso-called mediocre  pro day came a year after scouts took aim at the pro day work done by Teddy Bridgewater at Louisville in 2015.

This tweet alone should tell you everything you need to know about the importance of pro day. And remember who was most impressed by Russell; Lane Kiffin.

“Obviously, I’m very impressed,” Kiffin told the Shreveport Times in response to Russell’s pro day, leading up to the Raiders drafting him with the No. 1 pick in 2007. “We were very impressed. He had a great day. He seems very first class, very easy to get along with. No doubt he was a great leader here. That’s why everybody wants him now.”

We know how things turned out for Jamarcus Russell in the NFL, and it was not good. So if Russell sets the gold standard for a pro day workout, we should probably not get too invested in what is seen during a pro day workout. Pro day is important, but it is hardly the make-or-break event it seems to be considered, at least for quarterbacks. Christian had strong showing at Penn State’s pro day in 2016…

However,  was not enough to help Hackenberg be an early draft pick, and he now struggles to get a hold of the New York Jets offense. The impact of pro day may vary by position, and it is still somewhat important for players who did not attend the combine for one reason or another.

Other positions do get critiqued at pro days as well, so it’s not just the quarterbacks. Dez Bryant may be one of the top wide receivers in the league today, but he failed Bryant failed to impress scouts at Oklahoma State’s pro day.

“As it turns out, Oklahoma State receiver Dez Bryant showed up on time for his Pro Day workout.

His cleats, however, didn’t make the trip.

We’re told that Bryant forgot to bring his cleats, and that as a result he had to wear a pair of brand-new shoes, which had not properly been broken in.

As a result, Bryant was slipping, as NFLN’s Mike Mayock pointed out when discussing the workout on the air.

Per a league source, at least one team measured Bryant’s times in the 40-yard dash at 4.57 and 4.62 seconds, within the 4.52 to 4.68 range reported by NFL.com.  He presumably would have run faster, but for the slipping.”

Despite years of evidence, we just never seem to learn our lessons when it comes to reacting to pro days.

In 2014, Johnny Manziel’s “pro day” buzz was off the charts before and after the workout…

#Manziel had a great Pro Day. Nailed it. With pads and a helmet he made all the throws. Big pressure to NOT select him.

That year Manziel ended up being selected in the first round and Derek Carr in the second round. Also, in 2014, the hype train was in full motion for another LSU quarterback, Zach Mettenberger. It helped that Mettenberger got to throw passes to Odell Beckham Jr. and Jarvis Landry in his workout, but Mettenberger impressed the viewing crowd at his pro day just months after undergoing reconstructive surgery on his left knee. Perhaps that was taken into consideration. New Orleans Saints head coach Sean Payton sure seemed impressed.

“It’s as good a workout as I’ve seen just with regards to the amount of throws, but to know he’s three-and-a-half months post-surgery, that’s pretty impressive,” Payton said in 2014, according to The Houston Chronicle. “It says a lot about him — and his doctor.”

The feel-good comeback story played nicely, but Mettenberger’s skills and injury history kept him off the draft board until the sixth round, when the Titans picked him up. For those counting at home, that makes two quarterbacks drafted by Tennessee since drafting Locker in 2011. If you have a good pro day, you just might be drafted by the Titans too!

Are pro days important? Yes, of course they are. Like the combine, the physical exhibition is just part of the event. Interviewing and talking to coaches and scouts outside of a drill is also key, and we are rarely given insight into that portion of the event. Like preseason college football polls and power rankings, the reaction to a pro day will never be the best litmus test for a player’s future outlook no matter how well it goes. So take the positive and negative reactions with a sens eof history in mind and keep in mind players will be successful or fail due to what happens once drafted and not because of what happened on pro day.