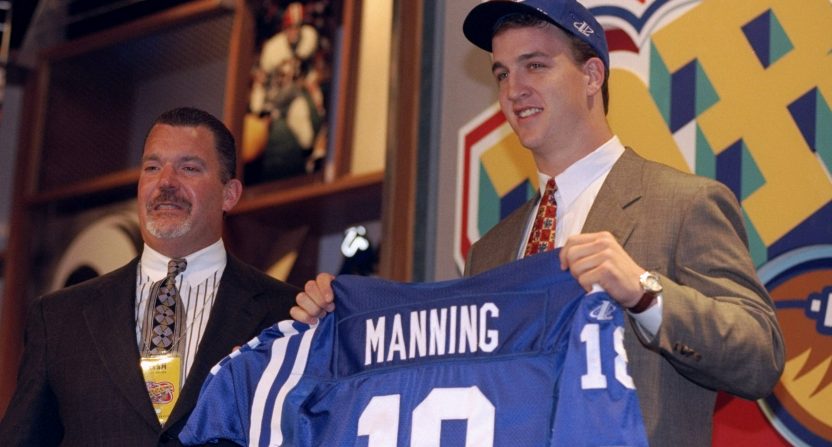 The history of the NFL Draft is littered with debates about which quarterback a team should draft over the other quarterback.

Every so often, both of them end up having quality careers and prove it was a discussion worth having (Eli Manning vs. Philip Rivers, for example). More often than not, however, history is very kind to one of the draftees but not the other. We remember some of the most infamous examples. Andrew Luck vs. RGIII in 2012. Cam Newton vs. Blaine Gabbert in 2011. Tim Couch vs. Donovan McNabb in 1999. Heath Shuler vs. Trent Dilfer in 1994. Drew Bledsoe vs. Rick Mirer in 1993.

Perhaps no quarterback draft debate will ever top the most infamous of all. Peyton Manning vs. Ryan Leaf in 1998.

It’s hard to explain to a young NFL fan today but there was a time when Manning was an unknown quantity. Sure, he was a fantastic college quarterback at Tennessee, but would his game translate to the NFL? He’d probably end up being at least serviceable but was he worthy of a top pick? And if so, was he worth being picked over Washington State’s gunslinger Leaf, who wasn’t as polished but had a cannon attached to his shoulder and potential to the moon?

In the end, the Indianapolis Colts chose Manning with the No. 1 pick and the San Diego Chargers took Leaf with the No. 2 pick and the rest is history. Manning went to become one of the best quarterbacks in NFL history while Leaf busted out of the league in three years before drugs led him down a path that eventually took him to prison (fortunately, Leaf seems to be getting his life back on track).

There is no debate. The Colts choose wisely and the Chargers chose poorly. That makes it all the more stark when we look back to a time when people were actually deciding that the Colts would be foolish not to pick Leaf instead.

Lest we try to lay all of this at the feet of media members, Newsday reached out to 20 NFL general managers, coaches, and personnel executives before the 1998 NFL Draft and asked which quarterback they’d pick if they had the option. The overwhelming pick was Leaf, who received 14 of the 20 votes.

“I’d take Ryan Leaf,” Buffalo Bills general manager John Butler said. “I like the big, physical aspects about him. He’s got good mobility, and there’s something about him, kind of tough to say just what, just something that you like in a quarterback. They’re both talented players, but I give the edge to Leaf.”

“I like the the fact that Peyton stayed in school for his fourth year, but you can’t just automatically say that Ryan is worse off because he’s coming out a year early,” Baltimore Ravens GM Ozzie Newsome said.

To be fair, one anonymous NFL executive remarked in the article said that he believed Leaf was a major risk. Kudos to you, sir, whoever you are.

Frequent FCT target Colin Cowherd recently admitted that he had favored Leaf over Manning at the time.

True, @alexmarvez … But Walsh told me month before ’98 draft that if he had 1st pick, he’d have passed on QB, then taken Brian Griese later.

Now onto the media. We begin with Will DeBoard at The Modesto Bee, who wrote on April 13, 1998, that the Bledsoe-Mirer debate was a textbook example of why you take the guy with the better upside potential (Leaf) over the guy from the bigger program (Manning).

Peyton Manning’s a nice quarterback, but put Ryan Leaf on that team and Tennessee beats Florida at least once in four years.

Congrats on your presumed win over Florida, at least.

Perhaps no one encapsulates the wrong side of the Manning-Leaf debate better than Vic Carucci of The Buffalo News.

If there only were a way Peyton Manning’s head could be transferred to Ryan Leaf’s body, the debate over which quarterback should be the No. 1 pick of the April 18-19 NFL draft would be settled.

To be fair, Leaf’s head is what got him into trouble for many years to come.

"#Colts May Like #Manning's Head, but Leaf's Arm Will Capture Their Hearts"- @viccarucci (4-5-98 @TheBuffaloNews) pic.twitter.com/OMW5sQHtk8

The name of any big-time professional game is still talent, and Leaf clearly has more of it than Manning will ever dream of possessing.

Maybe he did, but we can think of five MVP trophies and two Super Bowl trophies that Leaf now dreams of possessing.

As you can see above, FCT has made mention of this icy proclamation before and, to his credit, Carucci owns his take.

“I wrote it, I own it. It’s one of the hazards of spending many years in a business where you routinely share your opinions very publicly and very permanently − yellowing newsprint notwithstanding.

“My take reflected that I was clearly taken by Leaf’s powerful arm. Little did I know that he would prove to be such a train wreck above the shoulder pads and I obviously didn’t foresee Manning’s legendary career. Of course, I think it’s fair to say history will remember the Chargers’ whiff on Leaf as being just a tad worse than mine.”

Perhaps the most interesting anecdote of all in the Manning vs. Leaf debate is that the Chargers, the team who selected Leaf after Manning was off the board, were told by the guy they paid to know such things, not to draft him. But they did anyway.

The next day, Jones walked into the office of his boss, Bobby Beathard, the Chargers’ GM. San Diego had the second pick of the draft. Beathard admitted it was the Chargers who were paying Niednagel. “He says Peyton Manning has It. Ryan doesn’t,” Beathard told Jones. Manning was labeled as an “ESTP.” Leaf was “ESTJ.”

“I said, ‘Are we going to take Ryan Leaf, even though we know he’s not one of those guys?’” Jones recalled. “He said, ‘Well . . .’ and then he hemmed and hawed and said something about how the owner made the call.” The Colts shrewdly drafted Manning first. The Chargers, against Niednagel’s suggestion, drafted Leaf, who wasted little time alienating his teammates. Leaf opened the season throwing just one touchdown pass and turned the ball over 15 times. Head coach Kevin Gilbride was fired after six games. Jones became the interim head coach.

History is simply not kind to Ryan Leaf, this debate, and those who picked the wrong side.