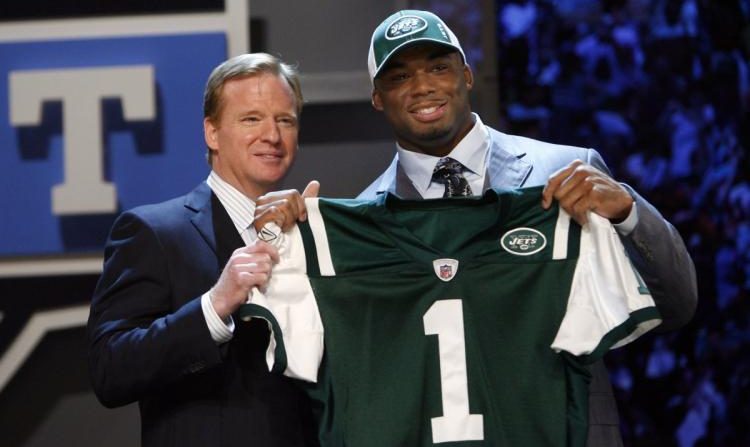 In need of a player to adapt to a new defensive system, the New York Jets put their trust in standout defensive end Vernon Gholston out of Ohio State with the sixth pick in the 2008 NFL Draft. It did not go well.

The NFL Draft is here, which is always a time to look back at the biggest draft success stories and the biggest busts. The New York Jets are no stranger to draft busts, but in 2008 they may have made what is considered among the biggest draft mistakes of all-time. For a team looking to rebuild, this was not at all what they needed.

In 2006, the Jets picked New England Patriots defensive coordinator Eric Mangini off the Bill Belichick coaching tree to undergo a new direction after a run with Herm Edwards. Mangini was among the hot names in the coaching game at the time thanks to his success with the Patriots, and the Jets were hoping to take a few pages from the Patriots’ gameplan in hiring Mangini. Under Mangini, the Jets would undergo a defensive transformation that can often take some time to adjust to in the NFL. Rosters are built for certain systems, so the Jets going from Edwards’ 4-3 style to Mangini’s 3-4 required some craftsmanship before it could ultimately be deemed ready to contend.

The NFL Draft was the best way to approach the roster overhaul for the defense, and in the 2008 NFL Draft, it appeared one of the missing pieces of the puzzle was finally there for the taking; defensive end Vernon Gholston out of Ohio State.

At the time, Gholston felt like the perfect fit for the Jets. The three-time Big Ten champion had earned Big Ten Defensive Lineman of the Year in the 2007 season to go with his First-team All-Big Ten accolades. During the 2007 season, Gholston tied the Ohio State record for most sacks in a game with four sacks against Wisconsin, and he would go on to set the school record for sacks in a season with 14.5 in 13 games. Pro Football Weekly was very high on Gholston as well, naming him a First-team PFW All-American. Not surprisingly, Matt Sohn of Pro Football Weekly gave the Jets high praise upon drafting the Buckeye defensive standout.

With the pick of Ohio State’s Vernon Gholston, the Jets are now a couple of DE acquisitions away from completing their defensive restoration. So far this offseason, they’ve added massive NT Kris Jenkins from Carolina and signed OLB Calvin Pace from Arizona, and have parted ways with perennially disappointing NT Dewayne Robertson and ILB Jonathan Vilma. And that’s why this was the absolute best pick the Jets could have made in the sixth slot.

Gholston was drafted with the sixth pick overall in the 2008 draft. Virginia defensive end Chris Long was already off the board with the second overall pick (St. Louis), and the Kansas City Chiefs had just taken defensive tackle Glenn Dorsey. The draft pool of defensive linemen was already shallow this early in the draft, meaning if the Jets wanted to improve on the defensive line, Gholston was probably going to be the best option left before getting another chance to make a pick. Gholston was also supposed to be an interchangeable guy that could play some outside linebacker in Mangini’s system, according to Pro Football Weekly.

Gholston fits the system. A defensive end in college, his game translates very well to outside linebacker, where he’ll form a potent bookend with Pace.The 3-4 is a tricky system to run. It’s more technically complicated than the majority of 4-3 schemes, and requires great coaching and a more narrow range of personnel to properly execute. But if a team does have the right personnel, it affords more flexibility to the “D,” and will ultimately lead to greater productivity. The Jets have the coaching with Mangini – like him personally or not, Mangini knows defense. And when presented with the rare player who personifies exactly what it means to be a 3-4 outside linebacker, the Jets made the wise choice to pounce on him.

Who were some of the players on the board that were drafted after Gholston? Carolina solved a need at running back with Jonathan Stewart at No. 13. The Cardinals picked up Dominique Rodgers-Cromartie at No. 16. The Baltimore Ravens added the future core-backfield of Joe Flacco (No. 18) and Ray Rice (No. 55). Tampa Bay drafted Aqib Talib at No. 20 and the Philadelphia Eagles drafted Desean Jackson at No. 49. Running back Jamaal Charles went to the Chiefs at No. 73. The Jets, who later in August traded with Green Bay to acquire quarterback Brett Favre, already had Darrelle Revis at cornerback and added fourth-round rookie Dwight Lowry instead. The running game was considered a need for the Jets in the 2008 NFL Draft, and Stewart was a player worth strongly considering.

Is outside linebacker the Jets’ biggest need? Not necessarily. RB Jonathan Stewart, the top running back on PFW’s board, would have also played a critical role in bringing the Jets back up to playoff contention. But, as good as Stewart is, he plays a position that the Jets can address in a later round and still get a good player. There are no more Gholston-esque players available after the physical freak from Ohio State.

The Jets did not draft a running back until the third round of the 2009 NFL Draft when they picked Shonn Greene out of Iowa. Among the running backs the Jets passed on in the 2008 NFL Draft other than Stewart, Charles and Rice included Chris Johnson, Matt Forte, Felix Jones, Rashard Mendenhall, and Justin Forsett. Before drafting Greene in the third round of the 2009 NFL Draft, the Jets had passed on LeSean McCoy and Knowshon Moreno. Moreno may not have panned out, but McCoy ended up being pretty darn good with the Philadelphia Eagles and AFC East rival Buffalo.

The Jets signed Gholston to a five-year deal with the expectation of using him at outside linebacker, but his rookie season ended up being used mostly on special teams after not being able to adjust and keep up with the defensive responsibilities. As the 2008 season went on and the Jets missed the playoffs despite starting the season with an 8-3 record, Mangini was fired. That meant Gholston would have to make his adjustments under a new head coach with his own defensive identity, Rex Ryan. Unde rRyan, Gholston played more on defense but never had the impact he was hyped to have coming out of the draft. A position change from outside linebacker to his more familiar defensive end in 2010 failed to see any improved production too, and in the offseason, the Jets moved on from their 2008 first-round draft pick by releasing him to free agency.

A season ago, the Jets hit home runs with their first two picks, CB Darrelle Revis in the first round and ILB David Harris in the second round, both of whom they traded up to get. With Gholston now in New York, Mangini has hit another one out of the park. Excellent selection.

Well, as it turned out, not quite. But Pro Football Weekly was certainly not alone in handing out positive remarks to the Jets following the 2008 NFL Draft. Football’s Future said Gholston was the Jets’ best pick, considering the team really wanted running back Darren McFadden and he was off the board.

History has told a much different story about Gholston than was originally scripted. Gholston has been labeled “an unprecedented NFL draft bust” by Pro Football Talk, joining the rogue gallery that consists of players like Ryan Leaf and Courtney Brown and Tim Tebow. Since the NFL started keeping a record of sacks in 1982, the Wall Street Journal reported Gholston became the only defensive end drafted in the top 10 to never record a single sack in his career. For a team like the Jets, with a history of draft picks that never panned out, that is saying something. Football Outsiders didn’t have to break a sweat and instead had to prevent itself from laughing when taking a retrospective look back at the 2008 NFL Draft in 2014.

Okay, let me start that again. The Jets took Gholston sixth overall. Barring a shocking resurgence, he finishes his career with as many NFL sacks as I do. I never played organized football. On the other hand, he got a lot of guaranteed money to get his 0.0 NFL sacks. I got none.

Gholston signed with the Chicago Bears in the summer of 2011 and was waived by the team a month after signing his contract. He then signed with the St. Louis Rams the following August, but he was once again waived prior to the start of the season (lasting just nine days with the Rams). In 2015, Gholston announced he had a tryout with the Washington Redskins, but he never caught on with the team and remains inactive.

Maybe things would have been different had Mangini remained the head coach of the Jets. It is never easy to figure out how a player’s career can be affected by a coaching change, but Gholston had played for two defensive-minded coaches and never managed to break through. At a certain point, that falls on the player just not being good enough.