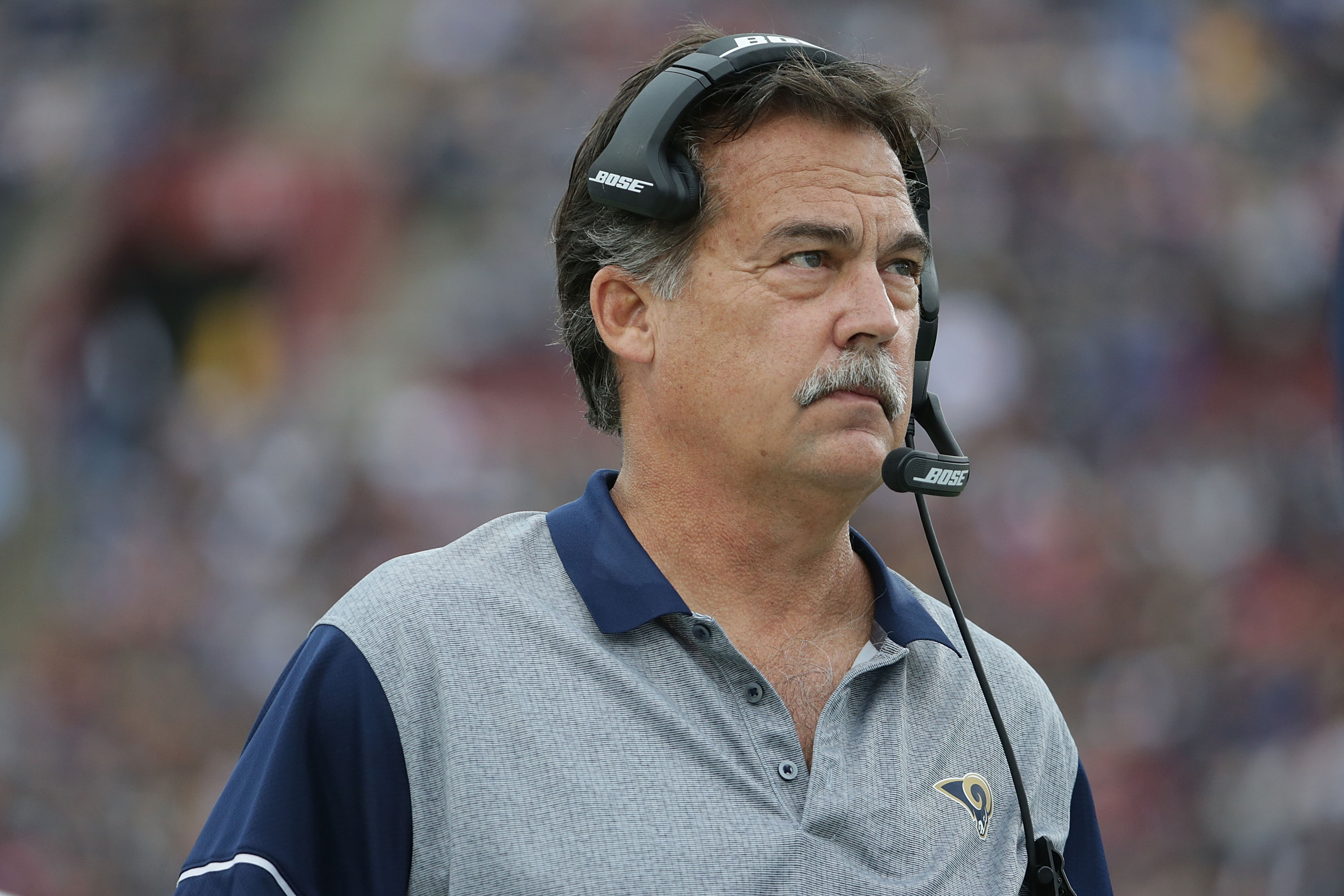 Los Angeles (not St. Louis; sorry, ESPN!) Rams’ head coach Jeff Fisher was fired Monday after tying the NFL’s all-time loss record with a humiliating 42-14 loss to Atlanta and producing incredible offensive futility. That provides a great excuse to look back at previous takes on Fisher.

Amazingly, after only producing six winning seasons and one Super Bowl trip (where, funnily enough, his team lost to the Rams by a yard) in sixteen full years with the Houston Oilers/Tennessee Titans franchise, posting just a 5-6 playoff record with no championships, failing to record a winning season since 2008, and failing to record a playoff win since 2003, tons of people still thought Fisher was a great coaching option after the Titans finally fired him following a 6-10 2010 campaign.

Fisher took the next year off, but started popping up in coaching rumors after the 2011 campaign. That led to some lobbying for him to replace Raheem Morris in Tampa Bay, Tony Sparano in Miami or Hue Jackson in Oakland:

The Bucs should never have left Jeff Fisher leave the team hotel. They'd play harder for him today than Raheem Morris. ATL 21-0

All criticism of Ross aside, if the #Dolphins do get Jeff Fisher, I think it's vindication. Fisher is right man for job, IMO.

Oakland should go after Jeff Fisher.

If the dolphins have a brain they will back up the truck for Jeff Fisher as head coach. Their Best since Don Shula #dontscrewitup

Fisher instead opted for the Rams, and tons of people loved that hiring:

@ReidLaymance As usual, ahead of the curve! Love the Fisher hire.

Watched that Jeff Fisher presser from yesterday. Gotta love that guy. #Rams are going to be a consistent winner very soon. #NFL

@General_MP fisher was a great hire; he will turn them around

My prediction: Jeff Fisher WILL lead the Rams back to the Superbowl. Unfortunately they will be back in L A. by then. Word

A lot of media went on to say how badly Dolphins’ owner Stephen Ross had missed by not hiring Fisher:

Stephen Ross continues his mastery of the Dolphins with the Fisher flub: http://t.co/Gw3pquVj

My new column: Losing Jeff Fisher is an embarrassing loss for #Dolphins but there is a way to atone. http://t.co/akDz8hGu

Fisher chooses Rams over #Dolphins. Ross on the defensive. Another Fins flop? http://t.co/HgILXAkf

Even Udonis Haslem of the Miami Heat chimed in:

Of course, Miami’s choice of Joe Philbin didn’t work out so well either. Philbin started with 7-9, 8-8 and 8-8 seasons that were downright Fisheresque, then was fired after a 1-4 start last year. His overall 24-28 (.462) record was only slightly better than the .409 (31-45-1) mark Fisher put up with the Rams. Dolphins’ interim coach Dan Campbell only went 5-7, too, but their team does seem to be making some progress now, going 7-5 so far under Adam Gase. It is worth noting that Oakland and Tampa Bay’s 2012 hires didn’t work either: the Raiders tabbed Dennis Allen, who went 8-22 (.222) before being fired and replaced with Sparano (3-9 as an interim coach), and didn’t find success until they picked Jack Del Rio last year (he’s 17-11) so far, while the Buccaneers went with Greg Schiano (11-21) and Lovie Smith (8-24) before current coach Dirk Koetter (8-5). So, it is possible that Fisher might have been less disastrous for those teams than the guys they initially picked. However, it seems doubtful he would have been a great success in any of those other destinations.

A lot of the takes on Fisher’s greatness seem to be influenced by recency bias. Yes, he went 10-6 in 2007 and 13-3 in 2008 with the Titans, and those seasons were somewhat fresh in the mind in 2012. Both those seasons saw his teams lose their first playoff game, and they were far more the exception than the rule for his head coaching tenure. The 8-8 mark he posted in 2009 and the 6-10 one he had in 2010 seem far more representative, but Fisher backers overlooked those in favor of his highs. They also may have overvalued experience, as many do; data suggests guys who haven’t previously been a NFL head coach are actually more likely to be successful, despite all those who like lobbying for someone who’s “been there before.” It all added up to a recipe for some freezing cold takes.

Of course, making a coaching pick is hard, and many coaches turn out to be flops. It is worth noting that the Rams didn’t have a ton of talent when Fisher took over in 2012, either, especially as they’d gone just 2-14 the year before. His first 7-8-1 season was actually pretty impressive. There certainly should have been more progress since then, though, and there wasn’t; the Rams went 7-9 in 2013, 6-10 in 2014 and 7-9 last year, and they were 4-9 this year before Fisher’s firing and posting historically atrocious offensive numbers. In fact, Atlanta scored more touchdowns in Los Angeles Sunday than the Rams have notched there all season:

So, yeah, those takes on Jeff Fisher’s brilliance are looking pretty chilly right about now.