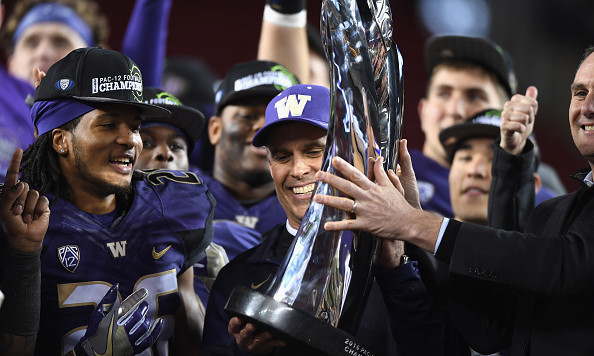 The Washington Huskies are rolling. After finishing the regular season 11-1, they clobbered Colorado last night in the Pac 12 Championship Game and seemingly are on their way to a spot in the College Football Playoff.  While the Huskies haven’t been in this kind of discussion for years, UW’s 2016 success is not a surprise to everyone. This is because Washington was the recipient of a significant, and rather surprising, amount of preseason hype.   Despite finishing 7-6 overall and 4-5 in the Pac 12 in 2015, Washington, out of nowhere, started receiving a lot of positive attention from the college football media. No one really knows where or when the hype began, but one could make a logical guess it was in February when Bill Connelly from SB Nation ranked the Huskies #10 in his annual S&P+ college football team ratings.  ESPN then followed a few days later; ranking the Huskies 13th in its first Football Percentage Index.  As Connelly points out here, other publications started releasing rankings where Washington was in the top 15, including Athlon (11), and Phil Steele (8).

Of course, as happens frequently in the offseason, Washington’s surprising hype prompted lots of discussion as to whether the Huskies deserved their high rankings.

Even UW’s head coach Chris Peterson acted like the hype was nonsense, and seemed rather annoyed that him and his team he had to deal with it.

Chris Petersen on Washington's hype: "We're the All-Off Season team. The less we do, the better we get."

"We have as much hype as the new Pokemon game." Washington coach Chris Petersen

As one would expect, there were many doubters.

Despite Athlon ranking Washington 11th in its preseason rankings, one of its writers predicted the Huskies to go 6-6 because “he pressure of being divisional front-runners is likely to get to them.” As also noted here, an entire group of CBS Sports college football experts  declared Washington as the most overrated team in the Pac 12 coming into the season:

I love Chris Petersen. I think he’s going to do great things at U-Dub. But for the love of Don James, you don’t just go from 7-6 to winning the Pac-12 North. That’s where some pundits have the Huskies this season. I get they have a promising running back (Myles Gaskin) and eight starters back on defense. I get that the Stanford game is at home. The Huskies will be better. They just won’t be the best. — Dennis Dodd (In agreement: Jon Solomon, Jerry Palm, Tom Fornelli, Chip Patterson)

In another piece, Fornelli requested that everyone “should pump the breaks a little bit” on the Huskies.  Oregon fan blog Addicted to Quack had a similar sentiment. It predicted the Huskies would win less than nine games and implored folks to “cool our freaking jets here.” It added “the Huskies went 6-6 last year and…Now they’re supposed to win 10 games and the North?  Not buying it.”

Bleacher Report listed Washington on its list of most overrated teams, as did the Detroit Free Press. USA Today projected the Huskies to finish 3rd in the Pac 12 North. Yahoo! Sports predicted UW to finish 6-3 in the Pac 12.

Even a projection that UW would finish #2 in Pac 12 North was considered a bit much for some:

Former Oregon offensive lineman  Geoff Schwartz, an admitted UW hater, was quick to clown on UW’s preseason hype and how they had lost to the Ducks 12 years in a row going into the season (In October, Washington crushed Oregon 70-21, ending the streak).

While preseason polls mean nothing… UW is ahead of Oregon. Their first lead against Oregon in 12 seasons.

SBNation’s Dan Rubenstein,  a documented Oregon Duck Fan, was not buying all the Husky love either:

Rubinstein, however, seemed a smidge nervous during the offseason he produced many sarcastic tweets praising the Huskies’ preseason rankings and predictions with a clear attempt to try and jinx the Huskies. The jinx did not work.

Even some of UW’s own fans were skeptical:

I'll say this: Hype around UW is awesome, but even as a die hard fan, putting them at #7 is ridiculous.

What were some of these same folks’ (and others) thoughts about the Washington throughout the season and now?

This is so painful to say but UW is so well coached. And the execute/play call extremely well. Ugh

Tried to tell you about this Washington team over the summer. Shame on all of you for ignoring me.

The hype rolls on…