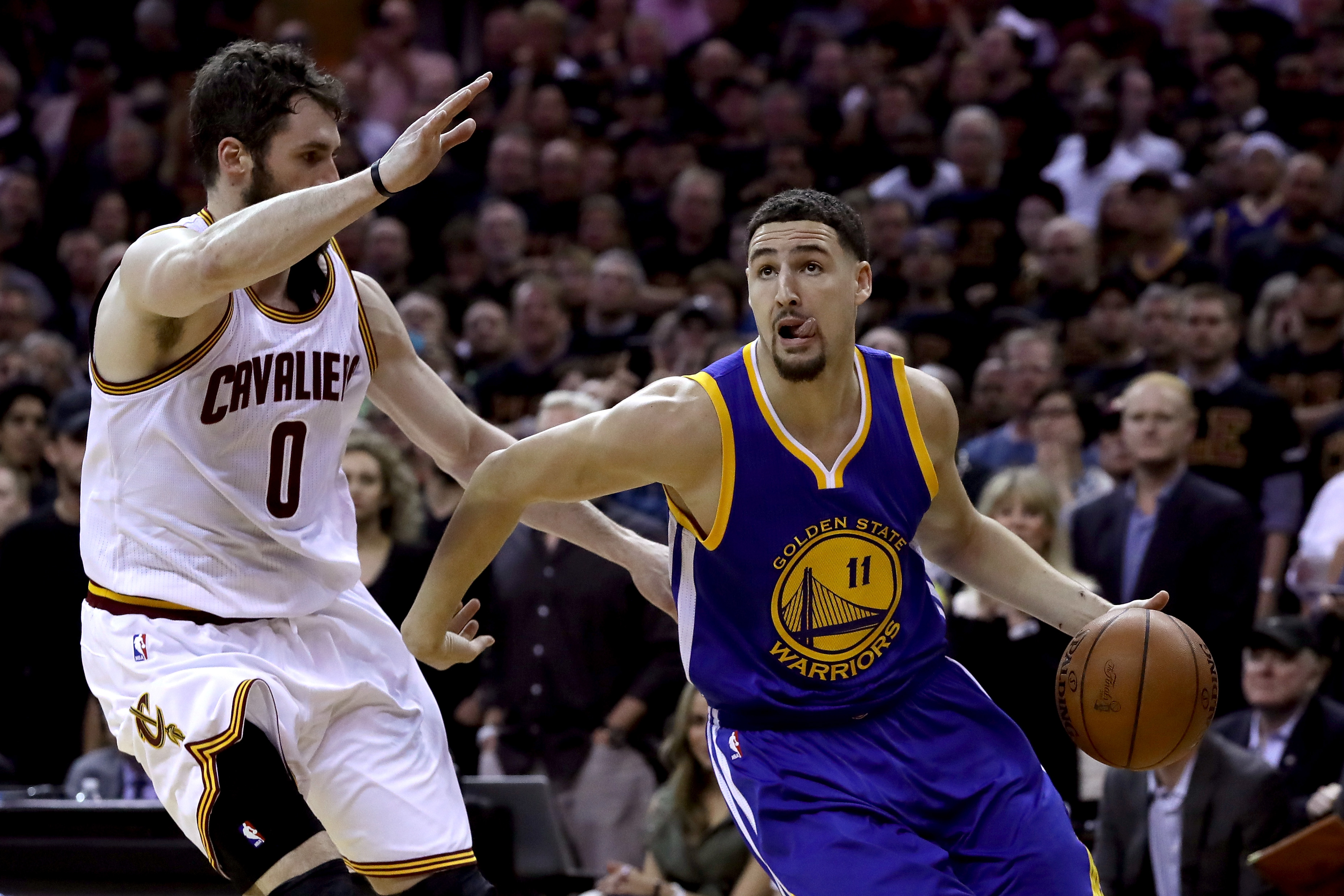 Before Kevin Love was a Cleveland Cavalier, he was almost a Golden State Warrior.

In the summer of 2014, as the Minnesota Timberwolves were aggressively shopping their star forward, Golden State looked like Minnesota’s most likely trade partner. After all, the Warriors were a good-but-not-great team hoping to take the next step, and they featured a promising young player the Timberwolves reportedly coveted: Klay Thompson.

At the time, Thompson was a career 16-points-a-game scorer whose career-high 3-point percentage was a respectable 41.7 percent. He had neither been an All-Star nor come particularly close.

Love, on the other hand, was a bona fide star, coming off a season in which he averaged 26.1 points and 12.5 rebounds a game and was selected to his third All-Star Game. Love was 25 years old (soon to be 26), while Thomspon was 24, so the age difference wasn’t huge either.

Still, the Warriors balked, and the Wolves ended up shipping Love to Cleveland for a package centered around rookie Andrew Wiggins. And just about everyone thought that Golden State was out of its mind.

Just so we're clear, the Warriors chose not to trade Klay Thompson and David Lee for Kevin Love. Officially.

@7Var Because they could have added Kevin Love and chose not to. That’s a huge mistake.

@7Var Yes, very solid team. Could have been a title contender with Love. He would have stayed unless they fell apart.

Kevin Love is good and all, but how could you possibly part with Klay Thompson? #BasketballComedy

@steventurous is it me or is this whole debate about klay or wiggins for love completely insane? why wouldn't you do either deal??

One East NBA coach on K-Love: "If I'm Golden State, I trade Klay Thompson. If I'm Cleveland, I trade Andrew Wiggins. Kevin is that good."

Based on Summer League trip, I'd say over 90% of NBA people outside the Bay think the idea of preferring Klay/Lee to Love is hilarious

@tomparrish @robsaunders1 @jwarnette Why the Warriors are refusing to give Klay up to get Love is beyond me. He makes them a contender IMO.

About as dumb as deciding not to trade for Kevin Love because they can't let Klay Thompson go. So, y'know, don't put it past them.

If the Warriors don't trade for Kevin Love because Steve Kerr is 'excited' to coach Klay Thompson, they'll regret it for a decade.

Let me get this straight… Warriors don't wanna give up Klay Thompson for Love and Cavs don't want to give up Wiggins for him. HUH?!?!

@diamond83 You have to give up Klay Thompson for Kevin Love. This is silly. I like Klay and understand his value, but it's go time.

Spoke with a former long-time NBA coach last night. He told me that he'd trade Klay Thompson (with D. Lee) for Love in a heartbeat.

#Warriors are playing the game properly, but at the end of the day, you trade Klay Thompson for Kevin Love 100/100 times. #NBA

If the Warriors lost their chance to get Love because they refused to include Klay, they're nuts. Just totally insane.

Several articles from major outlets played Devil’s Advocate, praising Thompson and extolling his value to the Warriors on both ends of the floor, but even then the authors concluded that Golden State should pull the trigger and trade for Love.

Warriors wise to value Klay, but not at expense of Love http://t.co/ISGkZLKSMz pic.twitter.com/FR2RommY5i

The Warriors should trade Klay Thompson for Kevin Love and here’s why http://t.co/uuCxKq4im3 via @washingtonpost

We all know what happened next. Thompson blossomed into an All-Star and one of the NBA’s best shooters, helping the Warriors to the 2014-15 NBA title and 73 wins in 2015-16. On Monday, he again reminded us how good he can be, scoring 60 points in 29 minutes in a Warriors win. Love, meanwhile, struggled to find his role in Cleveland and immediately saw his numbers drop across the board (though he, of course, did win a ring last season). He has been at the center of trade rumors for almost a year now. Although Love is having a bounceback season and Thompson has been inconsistent so far, Golden State’s decision to hold onto Thompson instead of acquiring Love looks obvious in retrospect.

Now, it’s certainly possible that if Love had joined Curry with the Warriors and Thompson had gone to a moribund Timberwolves franchise, their fates would have been switched. But as it is, we can laugh heartily at tweets like this one:

And if I live to be 100 I'll still never understand why Golden State won't move Klay Thompson for Kevin Love. That seems crazy to me.

Do you understand now, Gary?