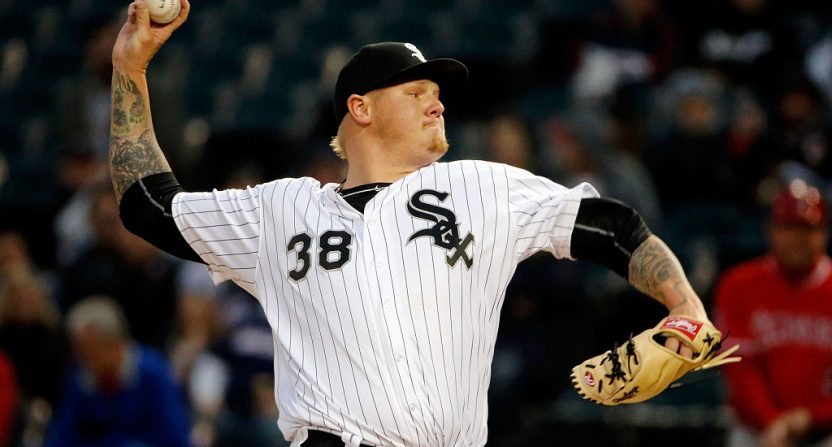 It seems that every baseball season there’s a team (sometimes two or three) that storms out to a hot start, prompting endless debate about whether they’re real, before soon crashing back to Earth.

It’s easy to forget now, with Chicago deep in a painful rebuilding process, but last May the White Sox looked really, really good. In fact, on May 9—just about a year ago—the Sox improved to 23-10, giving them the best record in the American League and second best in baseball. After a forgettable 2015 season and a bizarre ordeal involving Adam LaRoche and his young son during Spring Training, the South Siders were world-beaters in early 2016.

And while we’d like to report that no one actually believed the White Sox were as good as their record, that would be untrue.

In an article praising the Sox, USA Today concluded breezily that, “This is no fluke.”

Sporting News broke down the White Sox roster into players due to regress and players who would keep up their hot starts and eventually reached this conclusion:

The reigning World Series champion Royals are still the team to beat in the AL Central, but it’s time to believe in these White Sox as a legitimate playoff contender.

CBS Chicago ended a laudatory column by declaring, “These White Sox are for real.”

And then there were all the 140-character proclamations of the White Sox’s greatness.

So….always willing to admit when I was wrong. White Sox look like the real deal this year

Guessing I'll still have people say the #WhiteSox aren't for real. Better buy in. This team plays right. Swept back to back legit teams

Oh yes..they be for real the #WhiteSox put 5 on board in 7th @CSNChicago

Manager Robin Ventura earned particularly high marks for leading his team to such a hot start, especially in the wake of the LaRoche saga.

Here’s what the Daily Herald wrote at the time:

Only this year, Robin Ventura had to navigate his clubhouse through an unexpected stormy week during spring training when Adam LaRoche famously retired, causing his team to threaten the boycott of a spring game because of it. Ventura had a potentially explosive situation on his hands.

As steady as they come, Ventura was just the right type of personality to take his team through it.

But that potential collapse into chaos never happened, thank God. And who stayed calm through it all, like a pillar of sanity? Ventura. Who did the players respect though it all? Ventura.

Quiet as a cat, soothing as lanolin, he is the anti-Ozzie Guillen, which was the plan when he was hired in 2011. Ruckus and sideshow was replaced by dignity and calm.

Those things may not win games, but they don’t lose them, either.

So if Ventura was blamed for 2015, he must get credit for 2016. The knife cuts both ways. And right now, one of the best managers in the AL is not just floating in the wind, he’s twisting in it.

That’s right, Ventura was “one of the best managers in the AL.”

On May 10, WGN’s Adam Hoge wrote a column called “I was wrong about the White Sox.” He wasn’t apologizing for believing in the Sox, he was actually apologizing for doubting them. It’s what we at Freezing Cold Takes like to call at “premature mea culpa.”

So, once again, to Jerry [Reinsdorf], Kenny [Williams], Rick [Hahn] and, yes, even Robin [Ventura]:

I’m stupid, you’re smart. I was wrong, you were right. You’re the best, I’m the worst. You’re very good-looking, I’m not attractive.

The Sox were off to such a strong start that some people were already dreaming of an intra-Chicago World Series.

This Cubs-White Sox World Series is going to be tons of fun.

On May 9, the Chicago Sun-Times ran a column called “Dreaming of a Cubs-White Sox World Series? You should be.” Here’s an excerpt:

There’s no “too early’’ when it comes to talking about a Cubs-White Sox World Series. There’s only “too late,’’ usually after the first week of the season.

Everyone can look at the calendar and see that it’s May. If the baseball calendar were a growth chart, May would be a toddler. We haven’t even gotten to June, the teen years. So many things can happen. Angst. Rebellion. Girls. Cars. The infield fly rule.

But so many good things have happened to this point that it’s impossible not to consider a crosstown World Series. And why deprive ourselves? Chris Sale facing Kris Bryant? Jake Arrieta staring down Jose Abreu? Fans riding the CTA north, south and back again? It would be an el of a thing.

Of course, the Cubs did their part, reaching and winning the World Series that October. The White Sox? They finished 78-84 (55-74 after May 9), fourth in their five-team division. In the offseason, they fired Ventura, then traded Chris Sale and Adam Eaton, beginning a full-scale rebuild.

As of Sunday morning, they’re a surprising 15-14, hardly the pushover they were expected to be. This time, however, no one is buying.