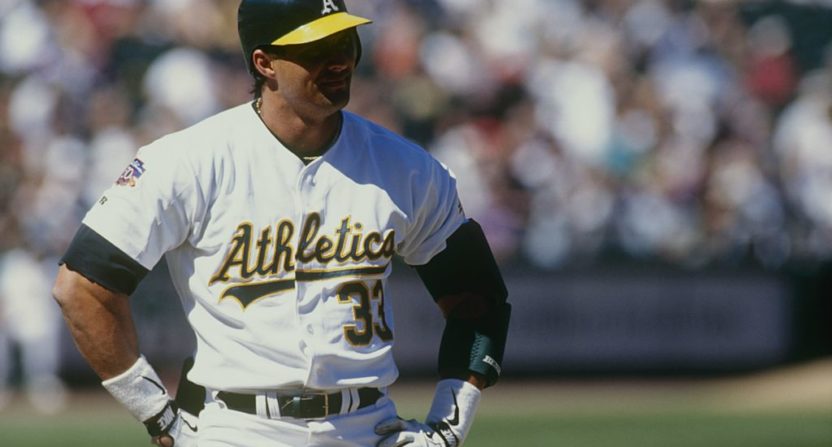 Babe Ruth is arguably the greatest baseball player ever. He’s also, inarguably, the most iconic.

So in the same way that everyone in the NBA is “the next Michael Jordan,” baseball has had its fair share of “next Babe Ruths,” all of whom inevitably fail to match—or even approach—that hype.

Now, some of these “next Babe Ruths” were not quite meant to be taken seriously. Maybe they were caricatures or maybe they were specifically in reference to a player’s “Ruthian” power. But in each case, someone invoked Ruth as a comparison for a promising player.

One of the first recorded “next Babe Ruth’s,” Doyle, a pitcher, was known as the “Babe Ruth of the Great Lakes” before Ruth had even put on pinstripes, according to Baseball History Daily.

Doyle ended up appearing in 75 Major League games as a roughly average pitcher. He never hit much at all.

Per Baseball History Daily, Paschal was called “a second Babe Ruth” by Red Sox manager Ed Barrow and then again by local newspapers.

He wound up with a .309 batting average but only 24 home runs in a brief MLB career.

Hodgens was briefly the “feminine Babe Ruth,” again according to Baseball History Daily, before quickly disappearing from public view.

Hack Wilson’s Babe Ruth comparisons were at least based on some evidence. According to a book called “Hack’s 191,” they began in earnest after a year in which Wilson hit .345/.425/.618 and led the National League in RBIs.

The next year, Wilson set a still-standing MLB record with 191 RBIs, a performance that eventually earned him a spot in the Hall of Fame. Still not Babe Ruth, though.

Via, Baseball by the Letters:

Bert Barth was perhaps one of the first victims of “prospect hype”. Signed by Baltimore in 1957, he was literally compared to Babe Ruth. Yes, Babe Ruth. Could he hit? Yes, and from everyone’s recollections, he could do so at a Major League level. Could he pitch? Yes, but not well enough to make it on a Major League level. Bert threw a high 90’s fastball that was flat as a pancake and a slider that just kinda spun. But nobody could really agree if he was a pitcher, a first baseman, a third baseman, or an outfielder. It started to get to him and the pitching interfered with his hitting mechanics. Finally released, he began to tear up the Carolina League when he no longer had to pitch. But baseball was no longer fun for Bert. All that shifting around had turned it into one big chore. He retired at the age of 25, almost a lock to make the Major Leagues.

The famously powerful Dave Kingman once drew comparisons to Ruth, according to a 1980 Washington Post feature.

“When he first came up, he was billed as the next Babe Ruth,” said Preston Gomez, manager of the Cubs. “This boy got a lot of publicity. People expect so much of him.”

When Jose Canseco arrived in the Majors and began smashing home runs, the Ruth comparisons were inevitable.

A long Miami Herald feature on Canseco was centered on the idea that Canseco could be the first ever power-hitting prospect to live up to Ruthian hype.

The  hype over Canseco followed naturally from the sports obsession with home-run hitters. The most exalted title in the baseball peerage is reserved for The Slugger. The guy who can really cream the ball. There may be no greater aesthetic pleasure in sports than the crack of the bat, the parabola of the long drive, the kertunk of the ball as it bounces into the empty bleacher seats. There are other thrills to be found in a dust-eating head-first slide, or in a freaky last-second jig of a knuckleball, or in a bases-loaded triple into the right-center gap, but these things don’t have quite the game-stopping, stand- up ceremonial majesty of the big homer. And when you are talking about sluggers, there is one name that is most exalted of all: Babe Ruth.

The piece goes on to say many hitters have been compared to Ruth but Canseco could actually be, “the one.”

“Never seen anything like it,” California manager Gene Mauch said, squinting to follow the downrange flight of another Canseco drive. “This kid could be the next Babe Ruth.”

Canseco wound up winning an MVP and hitting 462 home runs in a drug-aided Major-League career.

Toe Nash might be be the only guy ever widely compared to Babe Ruth before even playing organized baseball. With no formal training but remarkable power, Nash looked like the Bambino on the fields of South Carolina.

He ended up washing out of baseball and winding up in prison. Jeremy Schaap profiled him in a beautiful 2014 ESPN feature.

The Philadelphia Inquirer pointed out in February 2008 that the 2006 NL MVP was putting up Ruth-level power numbers:

Howard began to decline several years after that, and now his Major-League career appears over, with 382 home runs and an .859 OPS on his resume. He wound up with a home run for every 14.9 at-bats.

“I believed today,” Stan Zielinski wrote in May 2014. “I will send clip. To preview, squint your eyes and imagine a grainy film of Babe Ruth hitting a ball in the stands at Yankee Stadium. I swear I saw that reenacted today as the ball flew out over the 2nd fence in RF.”

Given that Schwarber is currently hitting .181 with a .656 OPS, we should probably slow down on the Ruth comparisons.

Grantland’s Jonah Keri analyzed the possibility the Marlins would trade young superstar Giancarlo and found only one precedent:

Now here’s the kicker: Amid the possibility that the Marlins might try to trade Stanton, we scoured the history books to think of a player with this combination of youth, skill, and success who was traded at the same point in his career. The best comp we could come up with was a player who had also amassed just more than 20 Wins Above Replacement through his age-24 season. Of course, that WAR figure underestimates the player’s value at that time, since he was also one of the greatest pitchers of his era.

That’s right. If the Marlins trade Stanton, the closest comp will be the Red Sox selling Ruth to the Yankees in 1919.

Stanton was not traded, and he no longer looks like the Ruthian power hitter he once was.

A caller to the Joe Rose Show in Miami proclaimed two years ago that Marlins first baseman Justin Bour was on a Ruthian trajectory. His evidence seemed to be Bour’s body type.

“Justin Bour in my opinion, that’s gonna be the next Babe Ruth, man,” Fish said. “I’ve never seen Babe Ruth play but from all the films I’ve watched in the 60s and 70s, this guy has got the same body as a Babe Ruth. I think he’s gonna give Giancarlo Stanton — that’s gonna be Roger Maris-Mickey Mantle all over again, brother. Peace out.”

Bour is a nice player who could maybe be an All-Star one day if everything breaks right. That’s about the nicest we can say.

After Daniel Murphy caught fire for the Mets in the 2015 postseason, Royals owner David Class shouted out the Babe.

"They're gonna be a handful. And Murphy himself is the reincarnation of Babe Ruth." — Royals owner David Glass on the Mets, Daniel Murphy

Murphy batted only .150 in the World Series, as the Mets lost to the Royals in five games. Murphy did finish second in NL MVP voting in 2016, though.

A Sports Illustrated cover in April asked whether Greene, a promising high-school prospect, was “baseball’s LeBron or the new Babe?”

COVER STORY: Hunter Greene is the star baseball needs. First he has to finish high school. (by @SI_LeeJenkins) https://t.co/o2mcy6YmDX pic.twitter.com/daUivfgEq0

Ohtani is coy when asked directly, but even the Fighters’ executives admit that this will likely be his final season in Japan. Then he’ll head to the majors and try to become the first player in a century—since a guy named Babe Ruth—to take his spot as both a pitcher in the rotation and a hitter in the everyday lineup.

We’ll see very soon whether Otani can become the first ever “next Babe Ruth” to live up to the billing.