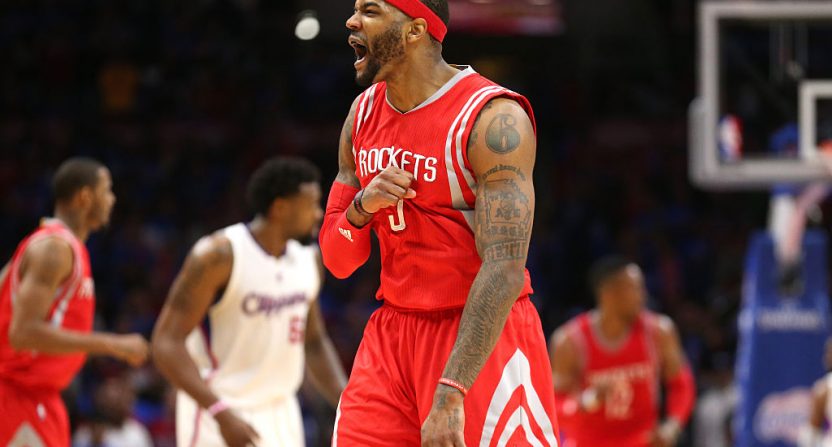 Here’s a newsflash. The Los Angeles Clippers blew it in the playoffs. They were the only higher seed to lose in the first round as they fell on their home floor in Game 7 to the Utah Jazz. Amazingly, it was the fifth consecutive year that the Clippers blew a lead in a playoff series.

If the Clippers hadn’t been through decades of not even making it to the playoffs, it would be one of the most infamous stretches in franchise history. Come to think of it, this stretch of constant disappointment probably still qualifies.

The Clippers are the first team in NBA history to blow a series lead in five straight postseasons. pic.twitter.com/erZVz2RXRP

While this series against Utah may be the one that puts the final nail in the coffin of the Doc Rivers, Chris Paul, and Blake Griffin era for LA’s second team, there’s one series among these five that stand out against the others – 2015 versus the Houston Rockets.

That season was arguably the Clippers’ best chance to do something truly memorable. Up 3-1 in the series, they were on the verge of their first ever conference finals appearance. And after Game 3 and Game 4 where they won by a combined 58 points, it was over. The Clippers would challenge the Warriors for supremacy out west and the Rockets were finished. And if you dare, in addition to the tweets below, you can check out a Stephen A. Smith rant about the series here.

None of the teams that lost consecutive playoff games by 25 points won another game. Looks bad for the Rockets.

This photo by @JamesNielsenHC captures the state of the Rockets. pic.twitter.com/WvNjzag1FP

Obvious Rockets not as advertised. Houston you have huge problem.#Clippers one more till conference finals!

So it looks like we have three really competitive second round series and then whatever the Clippers are doing to the Rockets. Not bad.

It's plain and simple, the Clippers are just a better team than the Houston Rockets.

It's time for the Rockets to go home: http://t.co/6s32deKHRU

The Rockets technically did go home. They had to as they hosted Game 5 and they actually beat the Clippers by a score of 124-103. Still though, all these premature declarations looked pretty safe in Game 6. With the Clippers heading back home where they smoked the Rockets in Game 3 and Game 4, the series was still all but over. Game 6 was going according to form when the Rockets trailed by 19 points with just over 2 minutes left in the 3rd quarter.

The #Rockets are playing like a bunch of kids who have already lost a game.

Clippers going And1 on the Rockets. This is embarrassing.

Soooo….time to focus on the draft??? #NBAPlayoffs #Rockets

As it all crumbles for the #Rockets Doc Rivers calls timeout. DOC RIVERS. Where have you been Coach McHale? down 18 is too late.

Been a Lakers fan all my life, but I've always watched the Clippers and wanted them to be good. This is great to see https://t.co/gFD6R6UDja

Sad for Rockets. Glad if Clippers can redeem their franchise for all those Donald sterling years.

Yup. This Golden State vs Clippers series is gonna be everything.

Tonight will be the Clippers' 64th win of the season, a new franchise single-season record (63 last year).

Is it fair to say there are 13 minutes left in the Rockets' season? I think that's the case… #NBAPlayoffs

Thank you CLIPPERS! Anyone else bored with MEMPHIS? WARRIORS finish them off tomorrow and start a great WEST final Sunday in OAKLAND!!!

Did a Twitter search for "Get the Rockets outta here" & there seems to be a strong common opinion pic.twitter.com/BndYyZakYc

The narratives will likely be vastly different, but this #Rockets season has been 100 times less disappointing than the #Bulls.

Clippers got this!!! #NBAPlayoffs

That’s when the Rockets staged one of the more remarkable comebacks in postseason history, or the Clippers staged one of the most remarkable collapses… it all depends on if you view life’s glass as half-empty or half-full. What made the remarkable comeback/collapse even more remarkabler (that’s a word, right?) was the fact that Houston did it without James Harden. Houston’s heroes? The unlikely combo of Josh Smith and Corey Brewer. The pair combined for 30 points in the fourth quarter, yes, THIRTY POINTS, as Houston outscored LAC 40-15, and forced a shocking Game 7.

Of course we all know what happened next. The Rockets completed the 3-1 comeback before LeBron James made it famous and would go on to the conference finals after a 113-100 Game 7 victory. While Houston’s stock has continued to rise as they just took Game 1 from the Spurs in this year’s conference semis, the Clippers have still not gotten over the hump and will be watching the later round of the playoffs from home once again.