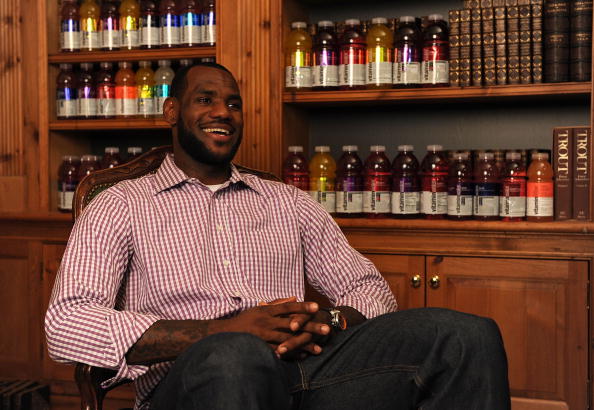 It’s hard to believe that it has already been seven years since LeBron James sat down with Jim Gray on July 8, 2010 in front of ESPN’s cameras and told the world that he would be leaving Cleveland to take his talents to South Beach and sign with the Miami Heat.  The controversial ESPN special was the culmination of months of speculation about where James, then a free agent, would sign. Among the teams in the running for LeBron’s services at the time: The Cavs, Heat, Bulls, Knicks, Nets, and Clippers.  Here’s a collection of tweets prior to July 1, 2010 of now humorous tweets speculating about LeBron’s future…

@WAD1980 …Can see it w/LeBron. The thing on Nets: That club goes to Brooklyn, gets blank slate. LBJ can be their Russell/Jordan — THE guy

My theory: Bulls get LeBron, Joe Johnson. Chris Bosh goes to Miami with Wade. Everyone else? Who cares.

Nets may have "edge" over Knicks in LeBron Derby ………..

Less than 2 days away from free agency and the Bulls landing LeBron!

Stand by my 3-yr deal in Cleveland guess RT @PDcavsinsider Despite all summits/rumors/reports, LeBron source told me this AM Cavs have edge

Because Chi has an all star point guard in D. Rose and also has great tradion.. I predict Lebron ends up with the Bulls..J-S-P-N lol

I just don't see LeBron playing for The Heat with D. Wade. I could see LeBron and Wade playing together in another city, just not in Miami

One report says LeBron's signing with Chicago & another says its Miami. In that case, I still say he stays in Cleveland or comes to NY

If anyone can convince #LeBron 2 come to NYC it's #Knicks Allan Houston. He'll b on that plane thurs 2 OH just like Ewing did 4 him yrs ago

Reports coming out that Bosh and Lebron to Bulls is a done deal.

LeBron James to the Bulls…wow well good morning to ChiTown!

NY Times reporting Lebron James and Chris Bosh are likely going to sign with the Bulls. "It's a done deal" said an NBA team executive.

Let it be known that I called it in advance months ago that lebron will go to Chicago Bulls..

All my famous friends got me the inside scoop. LeBron and Bosh going to the Bulls!!! Get Big with it! D Rose+LBJ+Bosh=a Wrap!!!

Newsday: "Several NBA insiders believe the Nets may be emerging late as front-runners in the LeBron Sweepstakes"

Yahoo sports says: "The Bulls believe they're going to get [Lebron] James" http://yhoo.it/cgA3ky

To those wondering how "best case" for Bulls doesn't include LeBron … I think he stays in Cleveland for 3 yrs. I can see Wade going home

Lebron will be a Clipper. Getting some interesting answers from a person close to the Clippers situation..

Von Wafer, who has known LeBron since the two were McDonald's All-Americans, tells me with confidence that James will return to Cleveland.

Thibodeau to the Bulls? Give LeBron his jersey already.

Damm… rumor is the Knicks is offering Lebron part of the fanchise if he signs there!!!!!!

Lebron to the Clippers.

The NY Knicks will once again have a franchise player. Lebron James, thank you very much for allowing me to love basketball again.

Jay-Z will soon be introducing the newest member of the New York Knicks….say hello to LeBron James. The King of New York.

Not being funny (obviously), but I'm wondering: Can you buy a LeBron #Knicks jersey off the rack yet? Or #Nets?

Everyone knows LeBron James is going to the New York Knicks. EVEN Boston Celtics fans.

"He doesn't want to tamper," said David Axelrod. "But the president thinks LeBron would look great in a Bulls uniform."

Jamal Mashburn thinks LeBron will sign with the Nets because of Devin Harris and also because Harris could be traded if they get John Wall?

Chad Ford is reporting that three GMs say LeBron is going to the Bulls. So scratch them off the list.

No Olympics in the summer of 2016 in Chicago but Lebron and the Bulls will be winning their 6th title that summer. Fair trade.

Could we see Coach K and LeBron with the Nets organization next year?

JJ Hickson is really gonna miss LeBron when he signs with the Nets.

Patrick Ewing coaching the Nets? If I'm New Jersey I make that move next year – have to create interest if no LeBron http://bit.ly/9D8h81