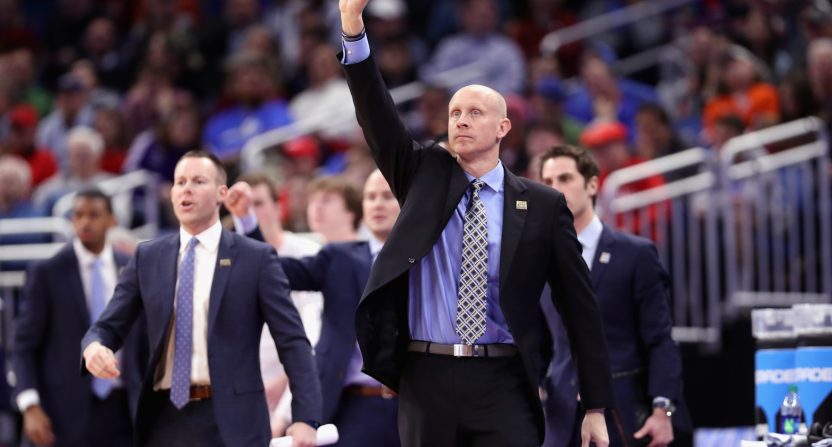 As the Xavier faithful is still celebrating its upset victory over Arizona in Thursday night’s Sweet 16 game in San Jose, it is hard to overlook the fantastic job head coach Chris Mack has done in his eight seasons leading the Musketeer program.    Mack was an Xavier assistant coach for six years before taking over the head position after previous Head Coach Sean Miller left XU to take the Arizona head coaching job.

In 2009-10 season, Mack’s first as head coach at Xavier, the Musketeers, at 24-8, were awarded a 6-seed in the NCAA Tournament and were matched up against 11-seed Minnesota in the first round at the Bradley Center in Milwaukee.  The Golden Gophers, who also had a first year coach, veteran Tubby Smith, limped into the tournament at 21-13.  Naturally, as the higher seed, and seemingly the better team, Xavier was favored to win the game.

That brings us to Minneapolis Star Tribute columnist Jim Souhan.  Souhan, a long time columnist for the paper,  is seemingly known more for his MLB and NBA coverage about the Minnesota Twins and Timberwolves (including his inability to make up his mind about how he feels about Wolves guard Ricky Rubio) than anything else.  However, with the Golden Gophers in the NCAA Tournament, Souhan was given the assignment to cover the team. In two pieces, one written before the game with Xavier and one written after, Souhan demonstrated that his depth of knowledge of college basketball was not nearly as abundant as his baseball or NBA expertise.

We were alerted to Souhan’s stories by Freezing Cold Takes twitter follower @PJS_blog, who, when the stories were written, was a writer for SBNation’s University of Minnesota fan blog The Daily Gopher.  @PJS_blog, known as “PJS” on the blog, masterfully dissected these columns at the time.

Souhan, in his column the day before the game, took offense to the fact that the Gophers were underdogs…

“This is a wonderful script, as long as you don’t think too hard about the Gophers’ self-proclaimed underdog status.  Because if you think about it, embracing them as underdogs requires the same willing suspension of disbelief as watching an M. Night Shymalan flick.

The Gophers are underdogs? Only in the malleable minds of boosters who think maroon sweatshirts are formal wear.”

It seems as if he no idea that Xavier was (and, of course, still is) a respected program who, while not in a top conference or a “blue blood” program like Kentucky, North Carolina, Duke, etc, had been (and still is) an mainstay in the NCAA Tournament and a very tough out annually. In fact, this was Xavier’s ninth straight NCAA appearance and, in its previous eight, it had reached the Elite 8 twice and the Sweet 16 once.  On the other hand, in that same span, Minnesota had only been to the tournament twice, losing in the first round both times.

In an attempt to prove his point, he makes a bunch of comparisons of the two teams.  Here is one of them…

“Xavier is coached by a rookie who got his job only because his predecessors bail out for bigger paychecks as soon as they can.  Chris Mack’s salary is probably supplemented by free Skyline chili.  Friday, for the first time, he will be a head coach in an NCAA tournament game.

He’ll be facing Tubby Smith, who makes millions of dollars a year and has taken four programs to the NCAA Tournament…at least twice and won it all with Kentucky in 1998.

Lets hope Tubby The Titan doesn’t allow himself, or his team to pretend to be overmatched in this game.”

In his shallow analysis, Souhan fails to mention that, as our pal PJS put it, “Xavier had more talent, more experience, better guards, superior inside play and the 6-seed and the Gophers [had] a bunch of role players.”  The following day, Xavier beat Tubby The Titan’s Gophers handily, 65-54, to earn a spot in the second round against 3-seed Pittsburgh.  After the game, Chris Mack went off on Souhan…

“We’re tired of being the little engine that could.  We’re a really good program.  And our kids aren’t scared of anybody.  We don’t always win, but we’re not afraid to compete. And Jen and Jim Souhan — however you pronounce his name — from the Star-Tribune, thanks for the motivation to tell our kids that we should be fodder against Minnesota.  Our kids are used to this stage. We played a lot of NCAA tournaments.  We’ve been very successful.  It’s my charge and our kids’ charge to continue to do that”

Pretty strong stuff by Mack.  But not strong enough to put an end to this war of words.   The next day, in a column titled “Hey, I’m famous!” (as if a sports column in Minneapolis’ biggest daily publication did not bring enough notoriety), Souhan responded (emphasis added)…

So, as you know, my column for the Thursday paper chided the Gophers for taking the ‘no respect’ tack at the end of a season in which they underachieved, and challenged them to avoid all that silly underdog talk when they got to the Bradley Center.

My Point: When you have the higher-paid coach and play in the tougher conference and beat better teams, you have no right to claim to be the underdogs.

So Xavier whips the Gophers on Friday afternoon, and in the postgame press conference, the Xavier coach – I believe his name is Whiny McBaldwimp – thanks me for inspiring his players.

You’re welcome.  I know that you don’t have the force of personality of coaching chops to inspire your players by talking to them about, you know, playing in the NCAA tournament in front of millions of fans, trying to bring glory to your school and perhaps even improving your [future] options.  Nope, you need a guy writing about your opponent to rally your players.

Obviously, they don’t listen to you, or you might have been able to inspire them by asking them to win one for you, the first-year, overmatched coach.  So you needed a newspaper columnist to do your job for you.

I will expect you to send me your paycheck for the week for handling his job for you.  I hope there’s a columnist in Pittsburgh who can help you this weekend.  More likely, [Pittsburgh’s head coach at the time] Jamie Dixon, a real coach who actually motivates his players all by himself, will eat you alive.  Maybe some day you’ll be big enough to do your own work.

“Can you imagine Bill Self or Roy Williams winning an NCAA tournament game and giving credit to a newspaper guy? And I thought Xavier was a Division I school.

Not sure how much further commentary is even necessary here, but lets just say that Souhan ended up missing the mark just a tad. Xavier went on to beat Pittsburgh 71-68 before losing to Kansas State in the Sweet 16, although it is still unclear on the methods by which Mack used to motivate and inspire his players to victory. In the following seven seasons, Mack has led Xavier to six NCAA Tournament appearances, including three Sweet 16s and, at the very least, one Elite 8, as the Musketeers take on Gonzaga Saturday for a shot at the school’s first trip to the Final 4.

Seems like Mack’s career prospects are on the up and up.  But while he will certainly be offered other opportunities in the future, who knows if he’ll want to give up that free Skyline Chili.