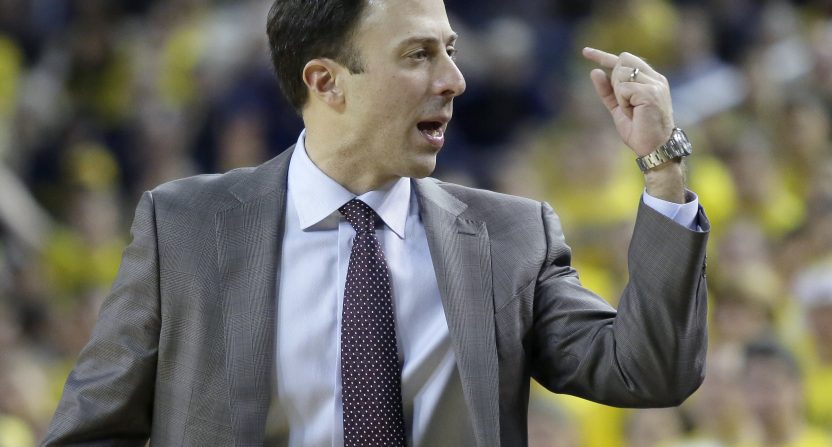 Perhaps one of the most surprisng developments this season is the rise of the Minnesota Golden Gophers, who earned their first tournament bid in four years.  The Gophers, who are a 5-seed in the South region will take on 12-seed Middle Tennessee State on Thursday in Milwaukee.

It would be hard to believe that, 10 months ago, many expected Minnesota to be playing in the NCAA Tournament. This is because by May 2016, the Gopher basketball program looked like an absolute dumpster fire, and their head coach, 34 year-old Richard Pitino, the son of legendary and current Louisville coach Rick Pitino, was under some serious pressure.

The turbulence surrounding the program was established by early March, as the Gophers were closing out an 8-23 season, one of the worst in its the history. In addition, around that same time, the school announced it was suspending three players for the remainder of the season in relation to a sexually explicit video that was posted to one of the player’s instagram and twitter accounts.

Things would get worse in the coming months.  In early May, Gophers forward Reggie Lynch, an Illinois State transfer, who had sat out the 2015-16 season, was arrested for criminal sexual conduct. A few days later, the Minneapolis Star Tribune reported that an internal university audit revealed that Pitino overspent on private jet travel by double his contractually allowed budget during his first season and by triple during his second season. Also, according to the report:

“In addition to the private jet spending, both basketball programs spent more than allowed on hotels, private cars, birthday or holiday parties, meals and valet parking. The audit even flagged “unreasonable” spending by Pitino involving “multiple” rental cars returned without full gas tanks and instances of parking at the airport even though the team had rented a bus.”

Pitino’s overspending was apparently approved by then-Athletic Director Norwood Teague.  Teague, who resigned from his post in August 2015 after admitting to sending sexually inappropriate text messages to University staff members, hired Pitino in 2013 after firing veteran Tubby Smith, who had led the Gophers to three NCAA experiences in his six years in Minneapolis.

The team’s awful record during the 2015-16 season, coupled with all of the program’s off-court issues triggered much speculation about Pitino’s job status.  However, monetary concerns complicated the issue. After Minnesota won 25 games and an NIT Championship in his Pitino’s season and 18 games in his second, Teague negotiated a contract extension for Pitino  that gave him a $700,000 per season salary raise.   More important, the extension increased his buyout from $3 million to over $7 million.  Thus, even with the team underperforming on the court and all the issues surrounding the program off it, the administration was in a tough spot even if it wanted to fire Pitino.

The buyout issue was such a concern that by the end of March, the University’s Board of Regents proposed a resolution that would require the Board approve all contracts for the highest-paid Gopher coaches in the University’s athletic department.

Frustration with the program started to show well before the off-court troubles started to arise.  In January 2016,  Fargo-Moorhead area columnist Mike McFeely lamented about “The Depressing Death of Gophers Basketball” and its young coach:

“The Gophers are bad, play horrible fundamentals, are indifferent about defense, can’t score and don’t seem to care all that much. Pitino seems mostly disinterested on the sideline and doesn’t appear to have any ability to fix the problem. The coach comes across as an entitled (his father is the famed Rick Pitino), smug brat who is in two miles over his head. You get the sense that if a school — any school — called young Richard tomorrow and offered a job, he would be gone. Pitino is easily the most unlikable coach in recent Gophers basketball history.”

It wasn’t much better in February…

M-I-N-N-E-S-O-T-A Again if this clown didn't have a buyout of $7.5 million and his last name wasn't Pitino he would be fired. This is a joke

By early March 2016, near the end of the dismal season, patience was wearing thin and the Minnesota Spokesman Recorder’s Larry Fitzgerald had seen enough.

“Richard Pitino, in year three of the Kaler-Teague experiment, now has taken the program into a gopher hole.”

“… It did not happen overnight; it took heavy doses of Minnesota Nice. Now you have a misguided program with no leadership and no one willing to accept responsibility.”

Others took their shots as well…

Richard Pitino was hired by Minnesota because of who his dad was. The University of Minnesota got exactly what they deserved.

Remind me again why Richard Pitino's job is safe @GopherMBB

Let's check in on the Richard Pitino era at Minnesota… pic.twitter.com/C5uLW0vVWI

Rutgers ends their losing streak by beating Minnesota and Richard Pitino should be fired.

Of course, there were comparisons to former coach Tubby Smith…

Richard Pitino and Minnesota finish the season 8-23 after a 33pt loss to Illinois today. Think the AD should have let Tubby go?

Despite all this, Pitino expressed optimism for the future.  For one thing, he had a highly touted recruiting class arriving in the fall (ranked #5 in the Big 10 by 247Sports.com). In addition, the previously mentioned transfer Lynch (albiet by May, he was waiting his fate relating to his May arrest), and Texas A&M transfer Davonte Fitzgerald were both eligible to play in 2016-17 after sitting out a year. Further, Minnesota was returning the bulk of its scoring from the 2015-16 season.

May 2016 was also significant time for the university because it hired a new Athletic Director, Mark Coyle.  Coyle, who came from Syracuse, had the pleasure of inheriting the decision about to what to do with Pitino.  Despite the hefty buyout, many of the media was calling for the coach’s head.

“The University of Minnesota has finally hired an athletics director, but we’re not done with Norwood Teague quite yet. The first order of business for Mark Coyle will be to hold his nose and trigger a buyout on Richard Pitino’s contract that currently sits at $5.7 million.”

“John Popper, who plays harmonica for Blues Traveler, was once asked if his intense style ever resulted in him, uh, vomiting. When he answered affirmatively, he was asked how he would keep playing.

“Sometimes,” he said, “you just have to swallow the chunks.”

When it comes to Pitino and his ridiculous buyout, the U’s elders are just going to have to swallow the chunks, and they can thank their former AD for the bad taste in their mouths.”

The Star Tribune’s Chip Scroggins seemed to have a similar sentiment:

Pitino looks so in over his head and his program is in such disarray that one wonders if he will need to do damage control with recruits and almost re-recruit them to avoid losing their trust.”

There wasn’t much optimism from the fan base either.  Here are the results from a May 12 Star Tribune fan poll asking “How confident are you that Richard Pitino will turn things around at Minnesota?” 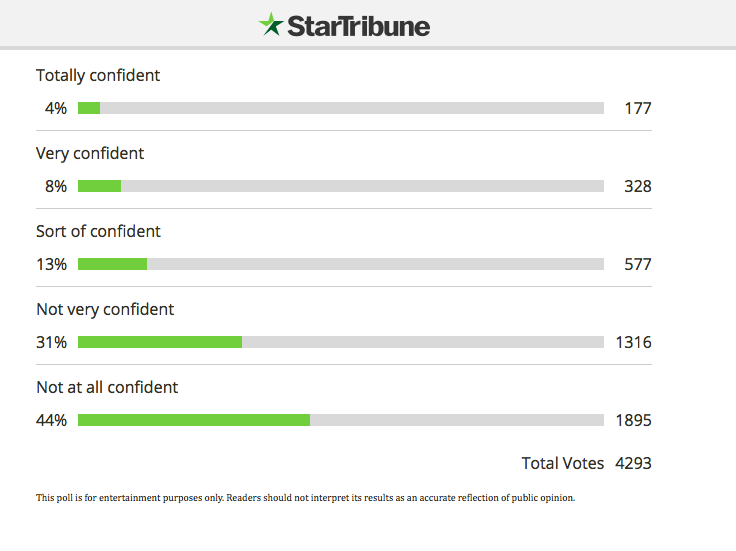 The turmoil and negative media attention wasn’t enough for Coyle to swallow the buyout, and he kept Pitino on board for 2016-17.  All the while, Pitino continued to preach optimism while defending any role he had in the reported incidents. The promising roster would stay in tact as in August, authorities announced charges would not be filed against Lynch due to insufficient evidence.

As the season began the difference in talent from this season to last was instantly noticable.  The Gophers started the season 12-1.  But after an overtime loss to Michigan State in late December, one still wasn’t convinced that this team was a winner…

This is what Coach Pitino will provide.#NIT

But Minnesota won three more, and went into a rematch with the Spartans on January 11 with a 15-2 record and a Top 25 national ranking, garnering Pitino much praise.  The euphoria ended up being short lived.  The Gophers lost to the Spartans that night, and proceeded to drop next four games.  After their fifth straight loss, a game where they blew a seven point halftime lead to Maryland at home, ESPN Twin Cities’ Judd Gulad wrote in a his game report titled, “High hopes now long gone as Gophers continue to slide with another Big 10 loss.”

“…the Gophers’ bubble has burst in a big way and that NCAA tournament berth many assumed was a sure thing is now very much in question.”

The initial optimism was wearing…

You can almost smell that NIT bid for the Gophers.

But the Gophers did not crumble.  They fired off eight straight wins before losing at Wisconsin in the regular season finale. After going 1-1 in the Big 10 tournament which included a revenge victory over Michigan State, Minnesota finished the season 24-9 and a trip to the Big Dance.

While this season may not prove that Richard Pitino will be the consistent winner the program wants, it is certainly a good start; and regardless of what it means for the future, given the events during the last year and a half, the fact that the Gophers are even in the tournament is a huge surprise to pretty much everyone.

ESPN is bringing back the 'This Is SportsCenter' ad campaign