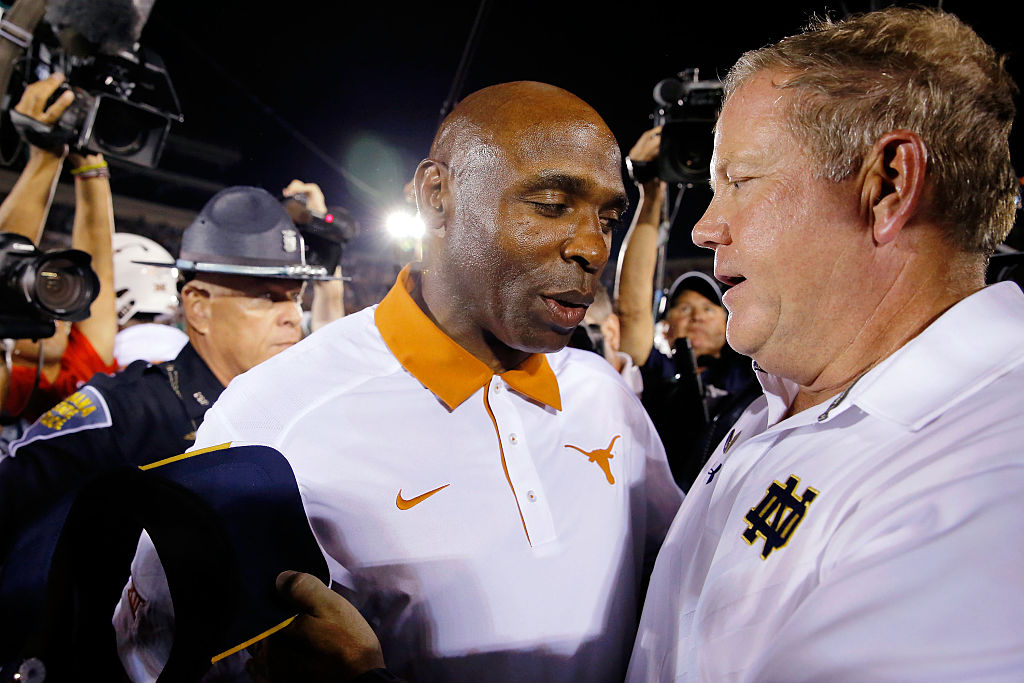 The 2016 college football season has been a roller coaster ride since the beginning of September and there’s probably still a few twists and turns that are out there in the next couple weeks. We’ve seen upsets galore, high-profile coaches get the boot, and a College Football Playoff picture that is still being pieced together with championship week upon us.

Remember when Charlie Strong led Texas to a thrilling season-opening home victory over Notre Dame? That was a great game, maybe one of the best games of the college football season, but it could also be argued that it was the high point of both teams’ seasons.

If possible, we could Cold Take the entire AP Poll who vaulted Texas all the way to #11 in the country after their win over the Irish. That may have been juuuuuust a little bit premature. Just a few months later, Strong is out of a job replaced by Tom Herman after a 5-7 season and Brian Kelly may be soon to follow him into the unemployment line after an abysmal campaign. But for at least one September evening, Texas was back…

And while we’re talking about that game and the Fighting Irish, at least one outlet had them going undefeated.

“Michigan State will be the Big Ten champion”

Wow, beating Notre Dame in September led to a LOT of cold takes this year. After Sparty won in South Bend, it looked like at the time it would be a victory to propel them to another successful season in 2016.  Of course, we didn’t know back then just how bad Notre Dame would be and just how much of a freefall Michigan State would take. The Spartans lost SEVEN GAMES IN A ROW after ESPNU’s Kevin Carter said they would win the Big Ten in his bold prediction.

"Michigan State is the best team in the Big 10"

The Washington Huskies have been one of the success stories of the season, but not everyone was a believer that the program would take a leap forward this year.  An entire group of CBS Sports college football experts said that Washington was the most overrated team in the Pac 12 coming into the season:

I love Chris Petersen. I think he’s going to do great things at U-Dub. But for the love of Don James, you don’t just go from 7-6 to winning the Pac-12 North. That’s where some pundits have the Huskies this season. I get they have a promising running back (Myles Gaskin) and eight starters back on defense. I get that the Stanford game is at home. The Huskies will be better. They just won’t be the best.  — Dennis Dodd (In agreement: Jon Solomon, Jerry Palm, Tom Fornelli, Chip Patterson)

Washington will play Colorado this weekend in the Pac 12 title game with a possible berth in the College Football Playoff on the line.

If anyone should know better, it should be the J-School

We’re not sure what Missouri’s journalism school was thinking with this tweet. Did they see the Tigers play any games this season?

DELETION: @mujschool objectivity determines this was not a great tweet after losing game to MTSU, & they scrap it! pic.twitter.com/r5HG0odZtO

That “stomping” turned into a 51-45 Missouri loss. #journalism

It’s never over till it’s over

College football is known for its wild games and epic comebacks, so counting out any team before the final whistle blows and the fans are on the field is a dangerous proposition.

In late September, the Tennessee Volunteers trailed the Florida Gators 21-3 at halftime before a second half comeback 38-28 victory. Apparently they did decide to keep playing…

Only reason to watch the second half is to find out if Tennessee quits or keeps playing.

Duke beat Notre Dame 38-35.  Best not to call a rout after the first drive of a game.

And speaking of premature route declarations, Booger McFarland called an Ole Miss victory over Alabama with the Rebels leading the Tide by three touchdowns early on in Oxford.

route is on in Oxford

Never risk a cold take at the hands of Alabama.

It’s always nice that outlets publish playoff predictions and preseason bowl projections from all of their experts so we can go back at the end of the season and have some fun with them. For instance, CBS’s Jerry Palm had the Big Ten completely out of the playoff and now they might become the first conference to get two teams in. Kirk Herbstreit had TCU in his Final Four. But the coldest CFP prediction might come from turtleneck enthusiast Danny Kanell, who had Georgia and UCLA in his Final Four.

Let this be a lesson to all those prognosticators out there – never fall for Georgia’s preseason ranking.

“They have a chance to be a pain in the butt…”

ESPN's Kirk Herbstreit on Rutgers: 'They have a chance to be a pain in the butt' in Big Ten play https://t.co/O6aGlOF6in