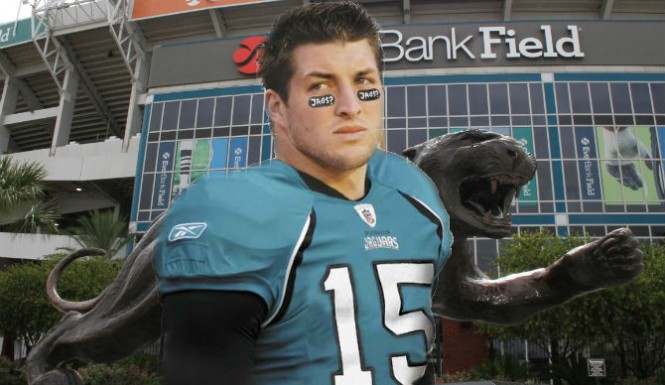 Even if you consider yourself tired of hearing about Tim Tebow, on some level you have to respect his desire to make it in whatever his current dream job happens to be. After his professional football career never truly came to fruition despite a season in which lightning struck at just the right moment in Denver, Tebow dabbled in TV with the SEC Network and was pretty good at it. But the desire to be a pro athlete persisted, and now the 29-year old is scraping it together with the Class-A affiliate of the New York Mets, the Columbia Fireflies.

Through seven games, Tebow created quite the stir by homering in his first minor league at-bat and adding another home run a few games later, but he was hitting just .185 in 27 at-bats with nine strikeouts. The Mets may be making a few bucks selling Tebow shirseys (I saw one at a triple-A baseball game last week), but it is very likely the Tebow experiment on the baseball field will ultimately fade away in due time.

As Tebow continues to work on his swing in the minors, and with the NFL Draft coming up, now feels like a good time to look back on Tebow’s entrance to the NFL. After a storied college career that included a Heisman Trophy and a pair of national championships, Tebow was a bit of a polarizing prospect. NFL scouts and analysts were more critical of Tebow’s shortcomings than those who followed him passionately and closely in college would tend to admit. Few expected Tebow to be a first round draft selection, which is why it was so surprising when he was selected by the Denver Broncos, who had traded up in order to grab him before the end of the first round. The Broncos, with new head coach Josh McDaniels, traded up with Baltimore by shipping the Ravens a second, third and fourth round pick.

That explanation alone may tell you why McDaniels lasted just two seasons as the head coach of the Broncos and general manager John Elway made a push to bring in Peyton Manning to run the offense in 2012. McDaniels was not alone in thinking the Broncos made a bold move that would pay off for years to come. Woody Paige wrote in a column for The Denver Post, “Tim Tremendous may be a high risk, but he will be a Mile High Reward.”

Josh McDaniels was willing to take a risk on the QB, take a chance on Tebow’s development and take a gamble on his own future as a coach. In two years, at age 35, will McDaniels be over the hill, or king of the mountain? He and Tebow will be peaking in Denver and in the NFL.

Nobody thought Denver would be the fit for Tebow anyway. The team most thought would be the perfect fit for Tebow in the NFL was the Jacksonville Jaguars. The team was located in the heart of Tebow’s existing fanbase and the Jags were coming off back-to-back losing seasons and rumored to be a potential franchise for relocation. Business was not great for the team, but the addition of Tebow would have been thought to provide a nice boost to the revenue stream. With the 10th pick in the NFL Draft, the Jaguars selected defensive end Tyson Alualu. A surprise pick in its own right, Alualu played in all 16 games in four seasons and earned All-Rookie honors in his rookie season. It was a more than serviceable draft pick, but not exactly what a team hopes with a top 10 pick when all was said and done. And he certainly didn’t boost the Jags the way Tebow was thought to be capable of.

Kristi Dosh, a true whiz when it comes to the business sides of the sports world, was fair in suggesting the Jaguars drafting Tebow would have been an easy money-making decision. A week after the NFL Draft, Tebow’s Broncos jersey sales led the way for the month of April on the NFL’s online store.

Dumbest business move ever? The Jags not drafting Tebow! He already has the most jersey sales for a rookie EVER! #NFL

Tebow was outpacing the No. 1 pick in the 2010 NFL Draft, Sam Bradford (St. Louis Rams) and No. 2 pick Ndamukong Suh (Detroit Lions). Not only was Tebow outselling fellow rookies, but he was also jumping out in front of some notable veterans in new places. Tebow outsold Donovan McNabb, who had been traded to the Washington Redskins from the Philadelphia Eagles. McNabb’s replacement as starting quarterback in Philly, Kevin Kolb, took the No. 12 spot in the April jersey sales. Other players in the top 10 in jersey sales for the month of April 2010 from the NFL’s online store included Drew Brees (Saints), Peyton Manning (Colts), Brett Favre (Vikings), Troy Polamalu (Steelers) and Tony Romo (Cowboys).

Rookies jumping on top of the jersey sales in April is no surprise given the timing of the NFL Draft and top picks being used on players expected to be core pieces of a franchise for years, but Tebow was no ordinary first-round draft choice. He was a third-string quarterback at best coming into the league but he carried a big spotlight given his Heisman Trophy career at Florida and outspoken religious beliefs and following. By all accounts, and if you can put aside any Tebow-fatigue, Tebow is a class act and the kind of guy you want to root for to succeed. Perhaps that desire to see a good guy thrive caused some to get a little carried away with their takes on Tebow.

Tim Brando has never been shy about sharing his thoughts and opinions, and thank goodness for that. With the NFL Draft unfolding, Brando was practically commanding the Jacksonville Jaguars to draft Tebow with the 10th overall pick. Brando, as well as a number of others, believed if Tebow was going to be a good fit anywhere in the NFL, it would be with the lowly Jaguars, a franchise that could guarantee to have a good amount of support out of the gate and a team that could benefit from having an instant face of the franchise. Brando went so far as to suggest the Jaguars not drafting Tebow would essentially guarantee the franchise would be moving to the west coast in a matter of years.

Any decision other than Tebow in Jacksonville spells doom for the business model of their Franchise. Trade down from 1st,or up from 3rd.MUST

Jaguars still in the clock! Tick,tick for Tebow. Either get him by trading down from 1, or up from 3 otherwise your headed West inside 3 yrs

Ray McNulty of the Standard-Examiner (Ogden, UT), in a column written right after the draft, expressed a similar sentiment as Brando…

“It doesn’t matter that, as the draft began, Tebow wasn’t worth the 10th pick, or even the 25th pick. If the former standout at Nease High in Jacksonville goes on to have a good NFL career, no one in Jacksonville will forget what didn’t happen Thursday night.

By reaching for the wrong guy with that 10th pick, the Jaguars might’ve taken their first step toward Los Angeles.”

It’s now been seven years since that 2010 NFL Draft. Tebow is in the minors and the Jaguars are still in Jacksonville (while two other franchises have moved to Los Angeles and another is moving to Las Vegas). So that one didn’t quite work out for Brando.

Brando is certainly not the first football announcer to get a little googly-eyed when projecting the NFL future for a college player. I recall a moment when the great Keith Jackson was calling a game and suggested Miami Hurricanes quarterback Ken Dorsey should be a top player drafted by an NFL team because he was a winner. Dorsey was a seventh-round draft pick in 2003 and lasted six years in the NFL between the San Francisco 49ers and Cleveland Browns before wrapping up his pro career with the Toronto Argonauts of the CFL. Sometimes you swing and miss on a college player because you remember the good moments he had in college, which later blind you from the criticisms NFL Scouts nitpick in projecting players to the next level. Jackson did this with Dorsey, and Brando did it with Tebow.

But Brando was not at all alone in this line of thinking regarding the Jaguars making a mistake not drafting Tebow. It was a talking point on the local news sports round-up segment in Orlando.

Talking Tebow and why JAX screwed up big time on After The News LIVE: http://www.clickorlando.com/video/19046963/index.html

Broncos make super choice in taking Tebow in 1st round!

Congrats to Tim Tebow picked in first round by Denver! Could not have happened to a nicer guy. Well-deserved. Tim will prove critics wrong!

The criticisms of the Jaguars’ decision to pass on Tebow in 2010 resurfaced in 2014 when Orlando Sentinel columnist Mike Bianchi took aim at the franchise’s attempts to build around Blaine Gabbert. Keep in mind that by the time this column was written, Tebow was already shown the door from Denver, the New York Jets and the New England Patriots over the source of four years. But Bianchi dug in with his Tebow stance in criticizing the Jaguars.

“The Jaguars investing in Gabbert instead of Tebow will go down as one of the great NFL quarterbacking mistakes in state history. OK, so maybe it’s not quite as bad as the Dolphins choosing an over-the-hill Daunte Culpepper over Drew Brees, but it’s still a baffling blunder.”

What is baffling is you could watch the first four years of Tebow’s NFL career and think the Jaguars made a massive mistake in passing on him as the franchise quarterback.

Of course, no hindsight of the Jags’ decision to pass on Tebow is complete without including a classic moment from Tebow’s No. 1 fan, Skip Bayless. Heck, even Stephen A. Smith was guilty of suggesting the Jaguars probably messed up by not drafting Tebow (“He is a football player, without a doubt.” Yikes.