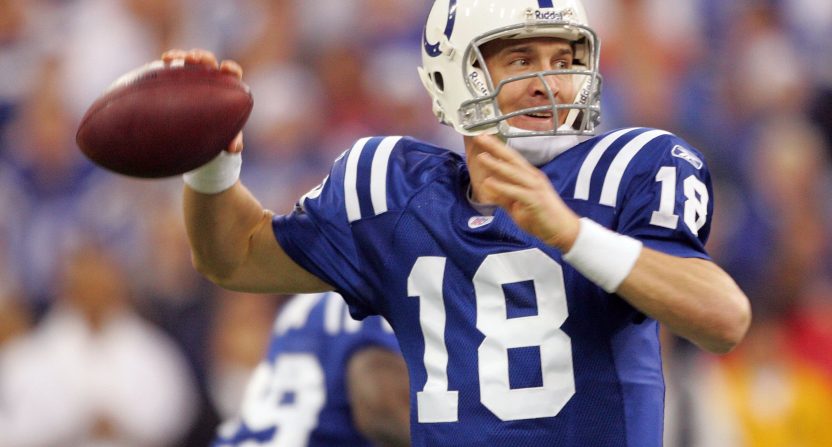 In 2017, you’d be hardpressed to find someone who think Peyton Manning didn’t retire as one of the greatest quarterbacks in NFL history. Of course, as we’ve documented, that wasn’t always the case.

Before he was drafted there were plenty of people who thought the smart money was on drafting Ryan Leaf instead of Manning. And even after the Indianapolis Colts cemented their quarterback position for the next 13 seasons by selecting Peyton, there were doubters more than happy to throw him out with the bathwater at the first sign of trouble.

Sometimes, Manning didn’t even have to do anything wrong. Someone else just had to do something right.

Since the Colts just announced that they plan to unveil a statue and retire the jersey of their Super Bowl-winning QB during the upcoming NFL season, we thought it might be a good time to look back to a time early in his career when everyone starting eyeing another rookie gunslinger for his own statue own day soon: Charlie Batch.

Early on in 1998, as Manning and Leaf were struggling to learn the ropes of their respective teams, the unheralded Batch had come out of the gates guns blazing for the Detroit Lions. Batch had surprised everyone by leading the Lions to a 2-2 start, including an upset win over the mighty Green Bay Packers. Five weeks into the year he was seventh in the NFC in passing with 761 yards and four touchdowns. Given the all of the hype they had to put up with in the previous months, some sportswriters were more than happy to throw Manning and Leaf to the wayside to do some annointing of their own.

Larry Weisman of USA Today didn’t mince words with his article titled “Lions’ Batch could be best of rookie QBs.”

Five weeks in, the crucible only reinforced what the Lions’ scouts knew last spring. The kid can play. In all the hysteria over Peyton Manning and Ryan Leaf, Batch just got a little lost.

That’s been the case pretty much throughout my whole career,” he says. “I’m starting to open people’s eyes.”

Dwain Price of the Fort Worth Star-Telegram laid out all of Batch’s bonafides. That he struggled at Eastern Michigan, working his way through injuries and illness. That he worked for a painting company during the summer. That his draft stock tumbled before the Lions took him in the second round. But here he was, the best QB of them all.

…while Manning and Leaf have been so-so so far in the NFL, the 6-foot-2, 216-pound Batch has flourished.
“He’s got the demeanor that you want out of a quarterback,” Lions coach Bobby Ross said of Batch.

“He’s got the leadership, the pizzazz, the confidence, the enthusiasm, the look in the eye, and the authority with which he calls the play.”

Would that pizzazz be enough to sustain him, though? A few weeks later, Bill Khan of The Flint Journal certainly bought in and dragged Manning down while he was at it.

Peyton Manning and Ryan Leaf got all the hype, not to mention bank accounts comparable to the gross national products of some third-world nations.

They were annointed the next great quarterbacks in the NFL, the heir apparents to the John Elways and the Dan Marinos.

But while Manning and Leaf haven’t lived up to that billing, it was little-known Detroit Lion Charlie Batch who had the first real breakthrough game for the rookie quarterback class of 1998.

Lions receiver Johnnie Morton backed up the hype one further:

“People are talking about Manning and Leaf, but Charlie’s the best rookie quarterback – bar none…He actually gets better every game. He’s playing like a veteran. People don’t notice he’s a rookie.”

Batch was indeed effective at times for the Lions but also injury prone. He spent four seasons with the Lions, eventually losing his starting job and leaving to play for his hometown Pittsburgh Steelers. There he spent 2003 to 2012 as a dependable backup on two Super Bowl teams. While Batch had a long NFL career and was a model player during his time in the league, it’s unlikely anyone will be building statues or retiring jerseys anytime soon.

To be fair, the same goes for Ryan Leaf, so it appears those sportswriters were at least half right.

ESPN is bringing back the 'This Is SportsCenter' ad campaign