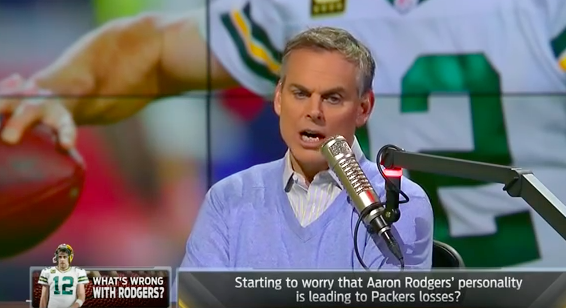 Everyone wants to debate what it takes to be an “elite” NFL quarterback. While there’s probably way too many average guys up for grabs in that debate, one name is certainly not up for discussion – Green Bay Packers QB Aaron Rodgers.

Rodgers is a surefire future Hall of Famer and among the greatest to ever play the position. He has a Super Bowl trophy, Super Bowl MVP, and two NFL MVP awards to prove it.

This season hasn’t been so easy for Rodgers and the Packers, though. At one point the team was really struggling at 4-6 with Rodgers turning in a few subpar performances. However, all of that has settled and the Packers have won three straight with Rodgers predictably leading the way.

Nobody would look at that situation and jump to any rash conclusions about Rodgers and the Packers being finished, right? Surely nobody would be so quick to write off one of the most accomplished quarterbacks in history. Well there are actually a few who did; especially Colin Cowherd.

Below is an incredible timeline of FS1 personality Colin Cowherd (no stranger to takes of the warm variety) going back and forth about the Packers and their quarterback throughout 2016. Watch how he started the offseason by praising Aaron Rodgers but  grew more and more negative about Rodgers throughout the fall, eventually writing off the Packers completely only to come full circle by recently proclaiming Green Bay as the NFC North frontrunner with Rodgers leading the way.

June 30: Aaron Rodgers is one of the Top 3 most valuable players in the NFL

.@ColinCowherd: If every NFL player was on the open market, the first 3 players taken would be Cam, Rodgers & Luck.https://t.co/iqF5Duiz7i

Ever notice that Tony Romo and Aaron Rodgers are the same guy?https://t.co/UxDEoFO283

Not quite following since Romo doesn’t have the MVP awards or the Super Bowl, but let’s keep going…

August 8: Aaron Rodgers is a better quarterback than Brett Favre

Legendary Hall Of Fame speech from Brett Favre but Aaron Rodgers is the better QBpic.twitter.com/1mWWJbAuZr

So where does that leave Romo? And how have we gone four minutes without mentioning Dak Prescott in this discussion!

October 16: CLEARLY SOMETHING IS WRONG WITH AARON RODGERS

Aaron Rodgers isn't the same. Not even arguable now.

October 18: Rodgers is just Jay Cutler with a ring!

Now this is just getting a bit ridiculous, right?

October 21: Sell whatever stock you have in Aaron Rodgers as a human being!

Even after their 16-point win over the Bears, @ColinCowherd is selling his stock in Aaron Rodgers and the Packers. pic.twitter.com/HXgiaTXUhY

November 18: Nobody likes Aaron Rodgers because he’s a terrible person!

Talking about kicking a guy when he was down. Where were all the people complaining about playing with Rodgers when Green Bay was lifting the Lombardi Trophy?

Matt Stafford is the best QB in the NFC North… Yeah. Better than Rodgerspic.twitter.com/jSU1Ibv9oS

December 4: “The better quarterback as a natural talent since he’s been 12 is Matt Stafford.”

It's possible Matt Stafford is a better QB than Aaron Rodgers. Just listen to @ColinCowherd pic.twitter.com/Qf3K9Q8jsj

Did you follow all of that? So just a few months ago Aaron Rodgers was one of the three best players in the league and a better quarterback than Brett Favre, who is a Hall of Famer and holds a number of NFL quarterbacking records. For Cowherd, Rodgers went from that to not even being the best quarterback in his division, behind a guy who has 1 Pro Bowl appearance and 0 playoff victories. We even invoked the name of JAY CUTLER for goodness sake.

Aaron Rodgers leads the NFL with 32 passing TDs this year to only 7 INTs and has a 101.1 QB rating.

It’s almost as if the more Cowherd has criticized Rodgers this season, the better he has played!

But wait, there’s more! Not only has Cowherd been all over the map on Rodgers, he’s done the same with the Packers as a whole. Take a look at the progression on these cold takes throughout the season…

October 9: The Packers are finished in the NFC North

The Packers are done winning the NFC North #vikings

The small window of winning Super Bowls for Aaron Rodgers and Green Bay has been closed.
— @ColinCowherd. https://t.co/CQ8ZyaPMRc pic.twitter.com/r6ztSeWlYS

November 21: The Packers are the NFL’s version of Whitesnake

"The Packers have become an 80's rock band. They're Whitesnake, they're Poison, they're Winger" — @ColinCowherd pic.twitter.com/dYGORkrlPl

November 29: Don’t get your hopes up, Packers fans

Green Bay's win over an irrelevant Eagles team doesn't mean they're about to make a playoff push.
— @ColinCowherd. https://t.co/8sbYYUiyde pic.twitter.com/SqGHE5WiZa

RT if you agree with Colin pic.twitter.com/ri4bzH1CNF

In fact, the Lions will “choke” away the division…

The 9-4 Lions are going to choke the NFC North away to the 7-6 Packers.
— @ColinCowherd. https://t.co/IWAhpNkHk0 pic.twitter.com/1YvA3NaTdw

This has been a fun look at the games that are played on sports talk radio, where everything that happens in that particular moment is the best or worst thing in the history of athletic endeavor. Of course, given the way this has evolved and how Cowherd has been on the opposite side of reality this fall, we should fully expect the Lions to breeze into the postseason, right?

Five movies we look forward to seeing in 2023

What were the five best documentaries of 2022?