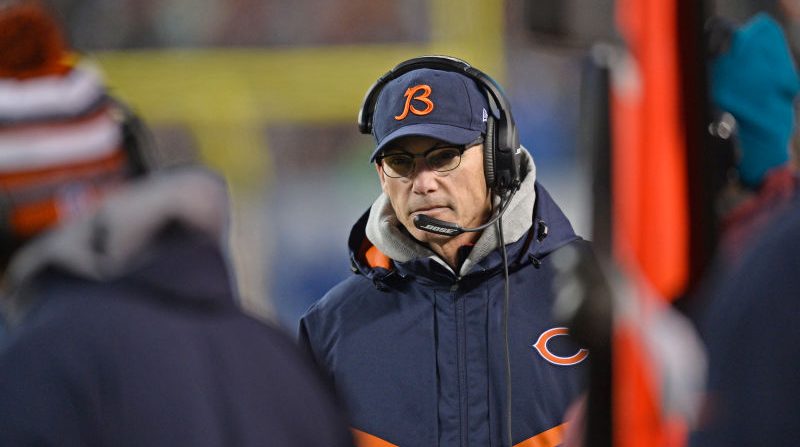 Marc Trestman spent a little more than two decades serving various roles as an assistant coach on a good number of teams before finally getting a chance to become a head coach for the first time. Despite a lengthy coaching career in the NCAA and NFL, Trestman’s first stab at being a head coach would come north of the border in the Canadian Football League with the Montreal Alouettes in 2008. For Montreal, it was a home run hire as it brought two Grey Cup championships to the city and Trestman was named CFL Coach of the Year in 2009.

Despite a lengthy resume in the United States and a brief and successful run as head coach in the CFL, there appeared to be little interest in giving Trestman a head coaching shot in the United States. Was it just bad timing with the job markets among NFL and NCAA jobs, or was there something else to it? The Indianapolis Colts interviewed Trestman for their head coaching vacancy in 2012, but ended up going with Chuck Pagano instead. In 2013, Trestman interviewed for two coaching jobs with NFL teams; the Cleveland Browns and Chicago Bears. The Bears ended up hiring Trestman in hopes his success at the CFL would translate to the NFL. To some, this relatively outside-the-box line of thinking for its coaching hire was seen as a bold move, leaving some to describe it as a “great hire.”

Trestman hire makes so much sense and here's why: http://t.co/xw7JthVG

I just want to say congrats to @marc trestman on the head coaching job.The #bears is gettin a great coach #genius #bestcoach

Matt Forte on Marc Trestman: "He's a genius in this offense."

Marc Trestman is a good hire for #Bears. Do your homework kids he isn't just a CFL coach. Has a ton of NFL experience

Harmon is right in saying Trestman does have a wealth of experience in the NFL to rely on. One of Trestman’s more recent claims to success at the time was his work in Oakland as a quarterbacks coach with Rich Gannon, who was named MVP and led the Raiders to a Super Bowl appearance. He also worked with Jake Plummer in Arizona and helped get the Cardinals to the NFC playoffs for the first time in 16 years. You may have heard of another quarterback Trestman had experience working with; Steve Young.

So……. the more I read about Trestman the more I think he, not Gruden, was the QB guru in Oakland.

One of the reasons the Trestman hire was critically acclaimed in 2013 was how Trestman scouted. Coaching in the CFL left him with a shallower pool of talent to work with compared to the NFL. This is not a slight on the caliber of athletes the CFL has to offer, but the best of the best are playing in the NFL, so Trestman was expected to have a better mindset for working with and acquiring players that may fly under the radar.

I think Trestman is going to be great at recognizing and recruiting ufas for Bears because of CFL background. Huge advantage.

Lots of tweets ask me about Marc Trestman to Bears…Good hire for Bears…detailed, organized, intelligent…he will win in Chicago…

Love the bears hire of Trestman, he'll get that Oline fixed.

One of the lone voices of reason chimed in with his concern, however…

Seems like nobody had any interest in Trestman as a HC over the last 3-5 years. Suddenly, great hire? Strange. Again, researching it.

Liking a coaching hire right out of the gate is one thing. There is much to be positive about when a team turns the page from one regime to the next. With Trestman being a new face in charge of the franchise, Chicago Bears fans felt a sense of freshness with the new-look Bears, but Trestman had yet to coach a game in January and February. The 2013 season started off as well as could be expected with a 3-0 start for Trestman, including a 40-21 win on the road against the Pittsburgh Steelers. That’s when things got a little bumpy with just one win in the next four games, but a Monday night win in Green Bay suddenly had everyone in Chicago back on board, with some even dissing the man Trestman replaced, Lovie Smith, in the process.

Marc Trestman is working his magic in Chicago http://t.co/VDY4RrCrYq via @cbssports

McCown's performance this week + vs. the Redskins is the strongest sign yet that Trestman was a brilliant hire. Imagine this game with Lovie

Trestman was great hire. Bears have best offense in a decade. But Lovie > Tucker.

Trestman is the real deal. What a great hire

after 5 years in CFL, Trestman now has Bears with its high flying offense atop NFC North after big win at Lambeau last night

mentioned it earlier in the game, this game is proof positive that the #bears gamble on marc trestman was worth it. great prep & game plan.

One key thing to keep in mind about that Monday night matchup is Aaron Rodgers was injured early and attempted just two passes before leaving with a shoulder injury.

Marc Trestman and Phil Emery are going to be here for a long time. #BearDown

Spent 30 minutes listening to a starting QB gush about Marc Trestman's offense. "After 2 games of studying, I knew it was a brilliant hire."

Trestman lasted just two seasons in Chicago, going 13-19. He was fired at the same time Bears general manager Phil Emery was canned by the franchise following the 2014 season.

I can’t help but wonder now if that unnamed starting quarterback was Rodgers. Trestman resurfaced in the NFL in 2015 as an offensive coordinator of the Baltimore Ravens, where he would get to work with one of the top passers in the league not named Tom Brady or Peyton Manning.

So Trestman is the new OC for #Ravens. Nice addition considering who was left. Definitely looks good for Flacco. Nice hire. #NFL

Ravens hire Marc Trestman to be the new OC. In my opinion, GREAT hire.

The Trestman era in Chicago was short-lived and never met any potentially misguided ceiling placed on it. Somehow, though, the Cubs still ended up being happy.

If the #Cubs do half as well with their managerial hire as the #Bears did with Trestman they'll be very happy.

Today, Trestman is back in the CFL as a head coach. The Toronto Argonauts formally introduced Trestman as their new head coach to the public today. Given Trestman’s previous success at Montreal, Toronto fans are now the ones holding out hope their new head coach will lead their team to a championship. Maybe they’re right, or maybe they are setting themselves up as Bears fans once did not that long ago.

What a great day to be a Argo #newbeginnings

How many coaches will say they will use football to teach players to be men, good fathers etc.? I want to play for Trestman

If Trestman is reaching out & assembling a staff to potentially coach the Argos, you'd be an absolute imbecile not to hire him at this point