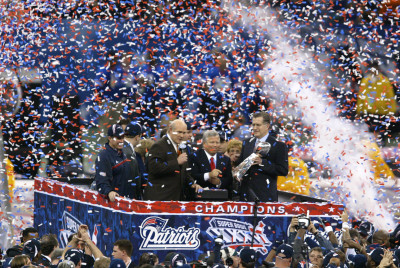 Today is the 15-year anniversary of Super Bowl 36, when the New England Patriots won the franchise’s first championship capping off one of the more improbable Super Bowl runs of recent memory. You probably know the story by now, but here is a brief summary:

The Patriots, in coach Bill Belichick’s second season with the team, were coming off a 5-11 season in 2000. Expectations for the 2001 season were relatively modest, but disaster struck in week 2 during a game against the New York Jets when Patriots franchise quarterback Drew Bledsoe injured a blood vessel after a hit by Jets linebacker Mo Lewis. New England ultimately lost the game falling to 0-2 on the season. To top it off, they also learned that Bledsoe’s injury would cause him to be out numerous weeks. The Patriots backup, a relatively unknown 6th round draft pick from Michigan, Tom Brady had to try and hold down the fort until Bledsoe’s return. He did much more than that. Brady finished the regular season with a 64% completion percentage, 2,843 yards passing and 18 touchdowns, leading the Patriots to an 11-5 record and earning Brady a spot in the Pro Bowl. By the time Bledsoe was healthy, Brady had cemented himself as the team’s starting quarterback; a role he currently maintains to this day. In the 2001 playoffs, Brady led the Patriots to a controversial 16-13 win over the Raiders in the AFC divisional round in Foxboro, and then Bledsoe, in relief of an injured Brady (who injured his ankle in the 2nd quarter), helped New England beat the Steelers in the AFC Championship Game in Pittsburgh to punch the Patriots ticket for the Super Bowl.

Meanwhile the 1999 Super Bowl champion St. Louis Rams and their explosive offense, “The Greatest Show on Turf,” led by NFL MVP quarterback Kurt Warner and running back Marshall Faulk, breezed through the regular season at 14-2 and beat the Packers and Eagles to get back to the Super Bowl after a disappointing 2000 season.

The Rams opened as 14-point favorites over the Patriots in the Super Bowl, held at the Superdome in New Orleans. However, destiny was in the Patriots favor, as Tom Brady led the Patriots down the field with under two minutes left to set up a 48-yard game winning Adam Vinatieri field goal as time expired to give the Patriots a 20-17 win and the franchise it’s first championship. The rest is history.

Lets take a look at some excerpts from numerous columns written right before the game. We’ll start out with someone everyone knows and loves.

“I’ve worked the French Quarter like a 1950s gumshoe searching for a clue to an unpreventable crime. I’ve asked around in Cajun joints and hurricane bars, bead stores and voodoo shops. Anyone know any way the Patriots can beat the Rams?”

“I don’t have a clue. A Super Bowl week of burning the midnight oil has made me feel even more confident in my original prediction: St. Louis, 40-17.”

“Only three words spoken to me by a fortune teller named Lady Luck at a place called Che Voodoo haunted my Saturday thoughts. ”Shorten the game,’ she said.”

“The Patriots cannot compete. If this game were being staged outdoors in the Northeast, they might stand a chance”

“Yeah, it’s nice to think that the longshot might come through, but there’s no reason to believe it will happen beyond sheer niceness. The Rams are much the better team. Super Bowl history teaches us that the better team tends not only to win but win big. Rams 42, Patriots 10.”

“I see Rams 41, Patriots 10 and it won’t surprise me if St. Louis becomes the third Super Bowl winner in history to ring up 50 points.”

“[Bledsoe] has been sitting on the sideline after suffering an injury earlier and just doing what he has been asked to do. Now I think Bill Belichick and the rest of the Patriot coaching staff should take a long look at starting Bledsoe, especially if Brady is not completely healthy.

Brady has had one of the best seasons of any quarterback so far this season, but I think Bledsoe should get the nod in the Super Bowl because of his experience in the big game

Think about it do you really want a quarterback in the biggest game of the season that is young and has never experienced anything like he is about to experience?”

“I don’t think it will matter who the Patriots play at quarterback because I don’t think there is anyway they can beat the Rams.”

“I am looking more forward to the halftime show by U2 because that will be way more entertaining than the game will be.

“This one is as predictable as Georgia Hayes/Rosenbloom/Frontiere walking down the aisle and saying “I do!”The Rams’ unique marriage of can’t-stop-us offense and new-and-improved defense is too much for the National Football League just now, never mind the silly New England Patriots.”

“These Patriots are just as underwhelming as their forebears. They don’t survive the Raiders without a driving snowstorm and the application of the stupidest rule in the NFL book, and they don’t get past the Steelers without a Kordell Stewart choke job so profound every EMT in Pennsylvania was converging on Heinz Field by halftime.”

“This thing is unfair, really, everywhere you look.”

“The Patriots can pull off the upset in Super Bowl XXXVI? Hey, pal, where did you come up with that nonsense? At Pat O’Brien’s after your sixth hurricane? Obviously you don’t know whether a football’s blown up or stuffed with feathers. Enron has a better chance of surviving than the Patriots. It’s a very simple formula: Patriots + New Orleans + Super Bowl 1/2 Disaster.”

“Sorry, Mr. Flight of the Imagination, there is no miracle in the forecast for today. There will be a lot of Pats on their backs during the day, but you won’t be giving yourself one at day’s end. The Rams can just about pick their score in this one, and you know it won’t be 17-23.”

“Maybe it’s the water, or perhaps some other beverage, but this is the ninth Super Bowl held in the Big Easy and none has been decided by fewer than 10 points. Since there is only one team in today’s game capable of winning by 10 or more, the prediction is easy: Rams 38, Patriots 10.”

“The Super Bowl is here … and I couldn’t care less.

Don’t get me wrong, I’m excited to see the game, but I could really care less about either of the teams who are in the game.

I have heard all year about how unstoppable the Rams are and how difficult it will be to stop them, yadda, yadda, yadda.

That’s true, to an extent.

The Rams are not unstoppable and can be beaten, as the Eagles proved last week. However, the Patriots aren’t the team to do it.”