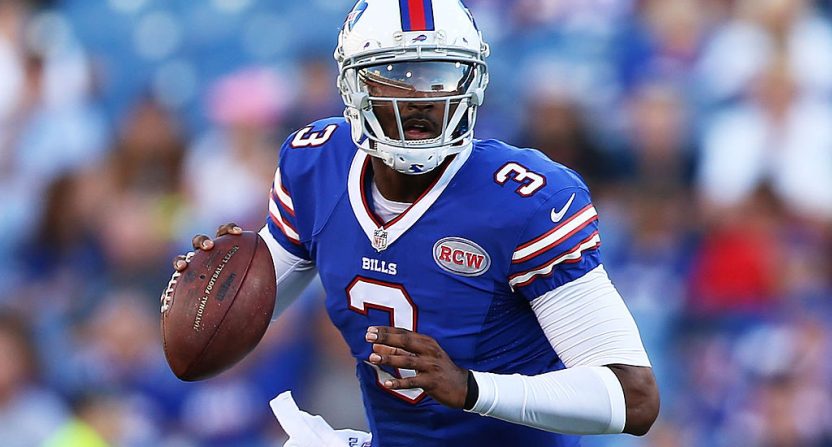 Ex-Buffalo Bills quarterback EJ Manuel signed with the Oakland Raiders this week to compete to back up Derek Carr, officially cementing his status as a Bills draft bust. After the Bills drafted Manuel 16th overall in 2013, he started 10 games as a rookie (and would have started more if not for a knee injury), then lost his job to Kyle Orton after the first four games in 2014. He would only start three more games in the following two years; two in 2015 and one last year. At the end of the 2016 season, Buffalo declined to exercise his 2017 contract option, leading him to sign with Oakland.

It seems like a long time ago that many pegged Manuel’s future to be very bright, especially during his rookie preseason in 2013.   After impressive performances in a couple of preseason games, there were plenty who figured he was going to be their starter going forward, and some who talked of an “EJ Manuel era” and said a Super Bowl might be ahead.

Here’s some commentary from during and after his very first preseason game against the Indianapolis Colts, where he completed 16 out of 21 passes for 107 yards (but wasn’t facing their top defensive players, and that isn’t a great yardage total):

Warren Sapp: That 2 minute drill should convince vets that EJ Manuel may just be the one.

See how EJ Manuel balled out yesterday ?? Doubters where you at???

Dawn of a new day in Buffalo? @KimJonesSports on the debut of EJ Manuel: http://t.co/j87mwNZGS5

Finally, the Bills have their QB in @EJManuel3.

Warren Sapp on NFL Network: EJ Manuel has command and control of this offense like no rookie I've seen.

Some of those takes, like Bell’s column, had some moderation about it being one preseason game, but they were still quite high on Manuel. In fact, his performance during those two quarters prompted ESPN’s First Take to discuss whether it validated the Bills drafting Manuel as early as they did (the pick was highly criticized by many at the time):

Did @EJManuel3's performance vs @Colts validate him being the 1st QB drafted?

The praise got even higher and more hyperbolic during and after the second preseason game, August 16 against Minnesota, where Manuel (10-of-12 passing for 92 yards in the second half) solidified his claim to earn the starting job over Kevin Kolb (13 of 21 for 111 yards in the first half, with one interception):

"EJ Manuel is far better for this offense."-@markschlereth .
My bro's going to hold it down

EJ Manuel reminds me of Cam Newton from watching him in the preseason…. Height body & throwing motion

That kid has a future. Good to talk to you the other day. RT @ByTimGraham: EJ Manuel starts second half by going 6 for 6 with a touchdown.

Like Kolb ever had a chance. MANUEL ERA BABY!!!

Re: #EJ Manuel. First, it looks like the Bills knew what they were doing after all. Second, sometimes a system fits a guy.

Got to watching EJ Manuel and love what I see. Have a feeling he can run this offense REAL well with Spiller there. #Bills

Manuel ended up suffering a knee injury in this game, resulting in him having minor surgery and missing the remainder of the preseason.

Of course, not all of these takes are over the top. Manuel was more impressive than Kolb in those games, and the Bills were probably right to start him when the regular season rolled around. They actually didn’t really have a choice in the end, as Kolb suffered a severe concussion in a later preseason game and never played again, retiring in the 2014 offseason. Still, Manuel likely would have been a better bet than even a healthy Kolb, who was coming off two pretty unimpressive years in Arizona.

Manuel was decent in that first year, too, throwing for 1972 yards and 11 touchdowns with nine interceptions and a 58.8 per cent completion mark. More could have been expected, especially considering that he only averaged 197.2 passing yards per game, but that season didn’t scream bust, especially considering that he was learning on the job and starting right away. However, the comparisons of him to Russell Wilson and Cam Newton were certainly a bit much, particularly considering how things went for Manuel from there.

Whether the way things worked out in Buffalo is entirely Manuel’s fault is debatable. Many first-rounders might have received a longer leash than he got in 2014, especially with the alternative being an aging Kyle Orton, and he was even more on the outside looking in after the Bills changed coaches from Doug Marrone to Rex Ryan ahead of the 2015 season. Manuel recently criticized the team for that, saying “Sometimes young guys continue to get a chance to grow and fight through those growing pains and I just wasn’t afforded that opportunity,” and he’s not entirely wrong. However, he didn’t necessarily do enough in practice and in the opportunities he did get to outshine the likes of Orton, Tyrod Taylor and Matt Cassel. It’s not all on Manuel, but he could have done more himself to make the dream of long-term starter come true.

Regardless of whose fault Manuel’s eventual failure in Buffalo was, many of the takes on how great he was from those preseason games do feel hyperbolic. The preseason should always be taken with a grain of salt, and comparing a new quarterback to established ones like Wilson and Newton often isn’t going to end well. Of course, not all of those takes above were over the top; Manuel probably did deserve to win that starting job, and he did show off some potential. But talking about a Manuel era and a Super Bowl was definitely going too far. Manuel might be a case in point why it’s worth remembering that the preseason is just the preseason, and not necessarily indicative of future success, even for first-round draft picks.