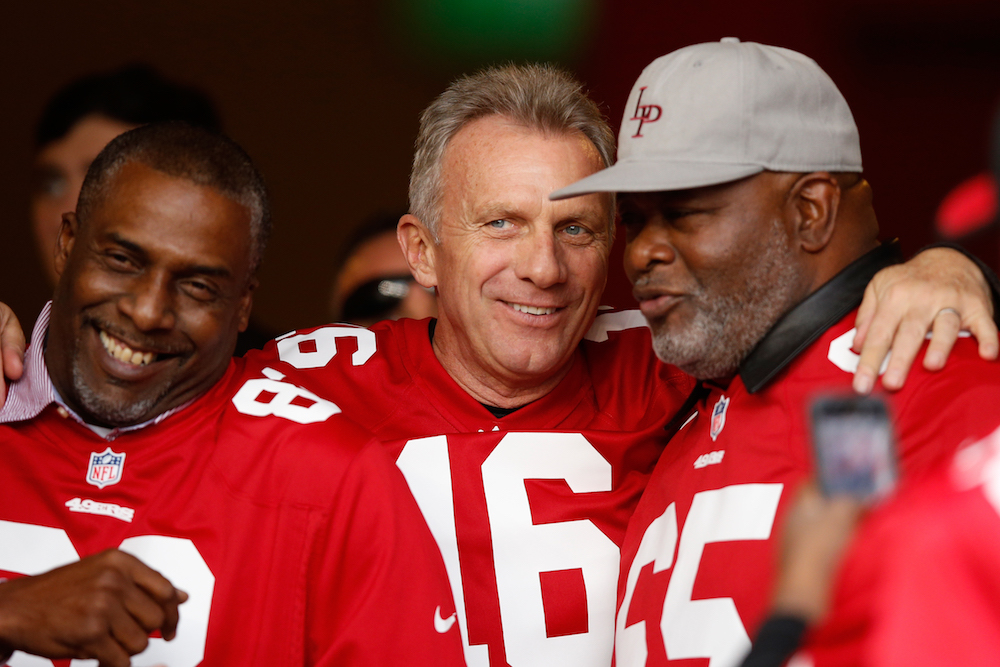 We can haggle over who is the greatest player in the history of a sport, but we know greatness when we see it. We’ll probably never get a real answer in the LeBron vs. Jordan or Howe vs. Gretzky debates but we can agree those names elicit a sense of rare, indescribable dominance in their respective sports.

In the NFL, there are great players at every position but it’s the quarterbacks who we usually turn to to define greatness. Tom Brady is still carving his name into the mountainside where he’ll join Peyton Manning, Dan Marino, John Elway, Johnny Unitas, and Joe Montana.

Montana stands out because for a whole generation of NFL fans he was THE great quarterback. Throughout the 80s, no other gunslinger could match his body of work. Four Super Bowl victories. Three Super Bowl MVP Awards. Two NFL MVP Awards. Eight Pro Bowls. The starting quarterback on the NFL 1980s All-Decade Team.

Joe Montana and greatness were synonymous. Still are.

So it’s no surprise that when people want to anoint the next great NFL quarterback, it’s Montana who they hold up as the master you should strive to be like. Unfortunately, too often people get a little bit ahead of themselves attempting to anoint the next Joe Montana. And history is not kind to the comparisons.

One person who really should know better is Bill Walsh. He coached Montana for years and must’ve gotten a good sense of how special he was. At least, that’s what you’d assume. Instead, Walsh was prone to throw around the comparison willy-nilly.

In 1997, Walsh went all-in on 49ers quarterback Jeff Garcia, who was replacing Steve Young, who had himself replaced Montana. Walsh tried to make a connection immediately.

“He’s a fine player and has been playing beautifully in Canada. He has all the qualities to be a championship performer. He’s quick, nimble and reminds me of Joe Montana.”

Garcia had some good times in San Francisco and elsewhere, but we’re gonna assume Walsh wants a mulligan on that one.

But then Walsh was on record as saying Notre Dame quarterback Rick Mirer had Montana-potential (“I thought potentially he could be another Joe Montana type player. I recommended him highly.”). In reality, Mirer was a draft bust who ended up as a journeyman for most of his career. “It’s confounding to me that he hasn’t matured into an NFL quarterback,” Walsh told the NY Post in 1999.

“I see Jake having a Montana-like career, including the Super Bowls.”

Plummer went on to have a very respectable career with the Cardinals, Broncos, and Buccaneers, but it was nothing like Montana’s. Not even close.

Walsh isn’t the only person guilty of the comparison. So many other people have done it and put unrealistic expectations on quarterbacks who could never live up to them.

According to Florida State coach Bobby Bowden, Weldon is not unlike Joe Montana. “There is a point at which a coach has to say of a great player, ‘No, I didn’t teach him that,’ ” says Bowden. “He does that on his own.”

After his college career, Weldon bounced around the NFL as well as the WLAF and even the XFL. He didn’t turn out to be the next Joe Montana, but he is a Birmingham Bolts legend.

George Seifert, who replaced Walsh in San Francisco, knew a thing or two about Joe Montana as well. Perhaps not as much as we thought because he compared Green Bay Packers one-year wonder Don Majkowski to him.

“He’s the closest player there is to Joe Montana in football as far as a quarterback. That will certainly be in his future because of his ability to stay alive and the timeliness of his play.”

Majkowski suffered multiple injuries that derailed his time with Green Bay and his career sputtered out as a backup elsewhere. So, not so much.

Because it seems as though every white Notre Dame quarterback needs to be compared to Joe Montana, Cris Collingsworth doubled-down during a 1994 Irish game when highly-touted quarterback Ron Powlus threw an impressive touchdown strike.

Powlus, as you know today, is the poster child for overhyped college quarterbacks.

In 1995 it was Colorado Buffaloes head coach Rick Neuheisel’s turn when he annointed Koy Detmer as “the next Joe Montana.” Detmer spent eight seasons in the NFL, all with the Philadelphia Eagles. He started all of eight games.

In 2003, ex-49er Brent Jones told the New York Post that while he’s bery wary of branding a guy as the “next this,” he felt that Jets quarterback Chad Pennington was due for greatness.

“I just felt like there were distinct similarities in their personalities. Just kind of that fun-loving, love to play the game and a quiet intensity to be the best. I kind of got that from him.

“Even some of his body language reminded me of Joe; that was kind of weird for me. Joe Montana is the best player to ever play football. To put that on a young kid is a lot of pressure, but I see it. I absolutely believe that Chad Pennington is going to be the next big star in the NFL.”

You were absolutely wrong, Brent.

“He reminds me of Joe Montana instinctively, has a very strong arm, and he looks like Montana, very unassuming. You look at him without his pads, he doesn’t look like a football player.”

Once he got to the NFL, he didn’t play much like one either.

You knew Skip Bayless was going to show up at some point, right? Skip was all about Robert Griffin III in 2012 when he said the then-Redskins QB reminded him of you-know-who.

You know how that worked out.

An unnamed scout, who is probably very happy they remained nameless, told the Milwaukee Journal Sentinal in 2013 that Johnny Manziel “reminds me a little bit of Montana.”

I don't make this comparison lightly but Winston reminds me of Joe Montana. The bigger the moment, the cooler he gets.

Winston has done very well for Tampa in two seasons, but let’s see if he wins a Super Bowl or three before we lock this in.

Former Tampa Bay coach Greg Schiano told Mike & Mike in 2015 that Teddy Bridgewater might be the next coming.

“This may be a little bit weird, but I look at Teddy Bridgewater and he reminds me of a young Joe Montana. He’s accurate, he’s just mobile enough to give you real fits and he’s a smart quarterback. He’s got weapons around. That’s why i think his ceiling is sneaky.”

The jury’s still out since Teddy went down with an injury in the offeseason. While he’s shown positive results in two seasons with the Minnesota Vikings, no one is going to hand him the crown just yet.

The things is, no matter how many times people are wrong when it comes to annointing the next Joe Montana, you just know it will continue. Eventually, someone’s gotta be right, right?