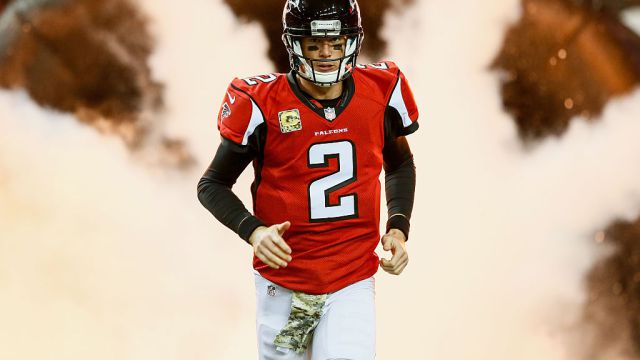 The Atlanta Falcons are preparing for one final game in the Georgia Dome this Sunday before closing the doors for good, and a trip to the Super Bowl is on the line. The NFC Championship Game pits the Falcons at home against the red-hot Green Bay Packers and offers a fantastic quarterback showdown between Aaron Rodgers and Matt Ryan. Rodgers has been riding a bit of a hot streak in helping to get the Packers to this point, while Ryan has been playing at a true MVP level all season long. With the way this season has gone, it is sometimes easy to forget just how far off from this stage Ryan and the Falcons were a little more than a year ago.

Fortunately, Twitter is always there to remind us just how much can change within that time, and in this particular instance, it did not disappoint.

The Falcons started off the 2015 season with a 5-0 record before things went off the rails. As is so often the case, the quarterback took the brunt of the blame for the falloff. After dropping the sixth loss in seven games, Falcons fans directed their pitchforks at the franchise quarterback and made it seem they were ready to move on.

Matt Ryan threw an INT.
Assclown.
Overrated.
Whatever you want to say about him, go for it. Last time i back those frauds

#MattRyan you are DONE…BYE…I'm so sick of watching this team lose. #Falcons

I’m pretty sure this guy meant Deshaun Watson, the quarterback that just led Clemson to a national championship and not some random guy on Twitter. But plenty in and around Atlanta were coming up with offseason to-do lists for the Falcons that included trading Ryan, like this one from Blogging Dirty (Atlanta Falcons blog on FanSided), which was also eager to ship out offensive coordinator Kyle Shanahan. Mike Bell of WQXI argued the Falcons should trade Ryan because “It’s all downhill from here,” the Falcons needed a number of pieces, “He is not worth the contract” and “You will not win a Super Bowl with Matt Ryan as your quarterback.” Well, a year later, many of those takes are starting to look a tad silly and Ryan has the Falcons playing a home game one step away from the Super Bowl. He may or may not win the Super Bowl, but it’s not exactly as though we are talking about a franchise buyilding an expansion on the football offices in order to make room for all the championship hardware it has collected either.

Atlanta radio host lays out 5 reasons why the #Falcons should trade Matt Ryan. Crazy or no? https://t.co/lIpEVNQTtD

At one point during the 2015 season, Frank Schwab of Shutdown Corner on Yahoo posed the question of whether or not the Falcons should still consider Ryan a franchise quarterback. Given Ryan’s age at the time (30) and the money being paid to him, he was not alone in suggesting the Falcons needed to take a good long look at their future and see how Ryan fits into it.

The Falcons are struggling. Teams in slumps like that need their franchise quarterback to put everyone on his back and snap them out of it. But, the Falcons don’t appear to have the type of quarterback who can do that.

Colin Cowherd, who is now 2-for-2 in writing off quarterbacks playing in this week’s NFC Championship Game (he’s been all over the place regarding Rodgers), jumped the gun on the Matt Ryan criticisms this season. He did not even wait until the final seconds ticked off Atlanta’s season-opening loss at home against the Tampa Bay Buccaneers when he gave a glimpse at his NFC South QB Power Rankings.

The Atlanta Falcons now have the fourth best QB in the NFC South.

All Ryan did in this 31-24 loss was pass for 334 yards and two touchdowns without an interception. But hey, a loss is a loss, and Jameis Winston just passed for four touchdowns in the same game for the winning team. Cam Newton was fresh off an NFC Championship season and New Orleans has a surefire Hall of Fame quarterback in Drew Brees. Maybe Cowherd had a case, but this certainly looks incredibly foolish now given how the season played out with Ryan passing for 4,494 yards and 38 touchdowns for the NC South champions who are now one win away from a Super Bowl appearance.

But Cowherd was not alone in his early hot takes about Ryan. Others joined in the criticism parade with some going so far as to label him a failure.

Has there been a franchise QB not worth the $$ more than Matt Ryan?

Oh, I don’t know. The Houston Texans signed Brock Osweiler after all…