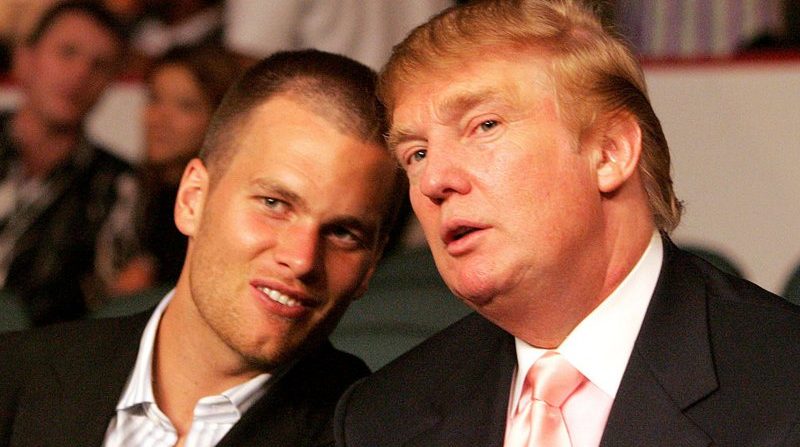 When the New England Patriots were losing by multiple touchdowns during their 34-28 victory over the Atlanta Falcons during Sunday night’s Super Bowl, folks on twitter were quick to ridicule President Donald Trump, along with Patriots quarterback Tom Brady, head coach Bill Belichick, and owner Robert Kraft, for their well documented friendship with President Trump.  Here are a whole bunch of tweets from the first three quarters of the game…

Apparently Trump's travel ban applied to the Patriots' defense. They didn't make the trip to Houston.

Was one of Trump's 53636 Executive Orders last week that the Patriots throw the #Superbowl? #PatriotTrolling

Wait wait. Is this what Trump meant when he described the "blood of Patriots" in his inauguration speech? #foreshadowing #SuperBowl

It looks like the only hope left for Patriots is if Trump decides to build a wall around the Falcons. #superbowl51

The Patriots were doing fine until Donald Trump supported them. #Facts

Ha. That's what happens when you support Trump. #Patriots #Superbowl

Trump's going the give The Patriots the Super Bowl via executive order anyway.

As second half begins, Trump says Patriots are up by 27. Spicer challenges press to prove that Falcons have even crossed the goal line once.

Trump must have signed an executive order banning the Patriots from scoring a touchdown. #SuperBowl

It's going to be fun tomorrow when Trump denies that he ever liked or rooted for the Patriots, barely knows Kraft, and calls them all losers https://t.co/ZEvv6fFSE4

Pats got that Trump curse goin on. Yikes. pic.twitter.com/Q63c55D4Qf

Trump is the new curse of Madden cover #SuperBowl

The Trump curse. His inauguration? Rain. His Muslim ban? Defeated. His team? Loses. Oh shit where does that leave the country?! https://t.co/Lz18XAbN7z

SMH. Nothing going right for the Pats All because Brady wouldn't denounce Trump….

This is Tom Brady's punishment for endorsing Donald Trump.

Trump put the mush on Brady, Belichick and the Pats. That's what happens when you want to dance with the orange devil

Trump may want to bail his boy out tonight. An executive order is the only thing that is gonna save Brady from these Falcons. #SBLI

I just feel like a pick-6 on Brady is the ultimate stick to Trump after all these positive commercials.

This is where Trump issues an executive order giving Tom Brady four touchdowns.

Brady better denounce Trump. Falcons doing it for the country

Tears for Brady. I think the one thing we can all get behind in this game…humiliation of the Pats might make Trump's Sunday a bit shit.

Not sure if even Donald Trump can save Tom Brady's ass now! #SuperBowl

Tom Brady is going to have to renounce Donald Trump at halftime to give the Pats a chance. God is watching #SuperBowl

Tom Brady in Superbowl a perfect example of what happens when you cosy up to Trump: you lose everything you thougbt you had

I can see in Brady's eyes: Trump got in his head. pic.twitter.com/GNKZZQ13Cv

You think during the #PepsiHalftime Tom Brady is calling his buddy, Putin's president Trump to see if Russia can rig this game? #SuperBowl

Maybe Tom Brady is throwing the game to stick it to Trump? Yeah sure I can live with this delusion SEND

Donald Trump on Monday: "i was never friends with Belichick…never once had dinner with Brady…lo…sers…i don't deal with losers"

Tom Brady supports Donald Trump. So looks like Trump's ego won't be inflated for too much longer. #SuperBowl

It's gonna be so awkward when the Falcons go to the White House and Trump just talks about how great Brady and Belichick are the whole time.

Trump kept calling Belichick, asking if he wanted to have lunch or go golfing #CurseofTrump

Good to see Belichick writing Trump another fan letter on the sideline. Like the way Falcons just ran over these motherfuckers.

It's foolish to blame Trump for this #SuperBowl, right? Talk to me Bill Belichick. @Patriots come on…

Looks like Belichick's decision to let Donald Trump call the plays for the Patriots tonight is backfiring, big time.

When Gosktowski is missing PATs, it ain't your day, Pats! (Karma for your Trump-loving owner and golden boy)#SB51 #SuperBowl

Karma for being a Trump supporter. Sorry Brady.

Karma's biting Bill Belichick in the ass for being a Trump stan right about now. #SuperBowl

Is this Trump karma?

"I wish I had never voted for Trump. The #MuslimBan is beyond offensive. My vote has brought me such bad karma today." – Tom Brady's Soul pic.twitter.com/NSYL5OUrbn

Brady reflecting on his friendship with Trump, like "Is this karma?" #SuperBowl pic.twitter.com/yRit63a3QV