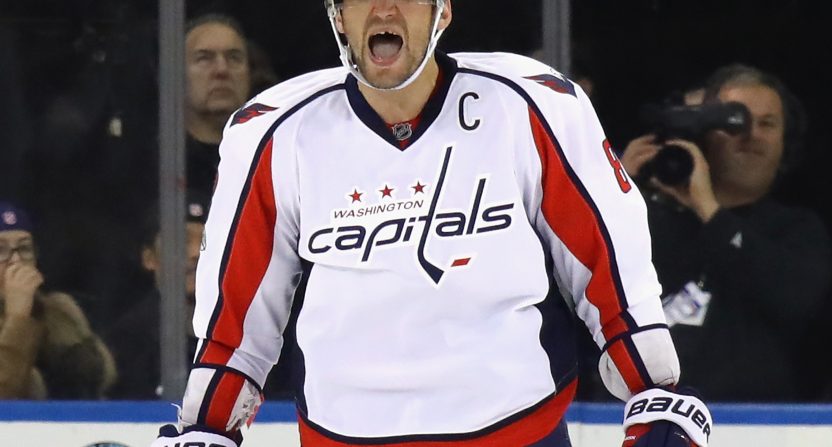 The Washington Capitals are having another great regular season.  Their 92 points currently leads the NHL, and once again they are legit Stanley Cup contenders.  On Monday, they beefed up their already stellar lineup adding defenseman Kevin Shattenkirk in a trade with St. Louis.

The Shattenkirk trade triggered many different types of reactions from the hockey world ranging from excitement and confidence to cautious optimism and skeptical cynicism.

Lets review some of the reactions, as separated into various different categories…

Long perceived as regular season champions, the Capitals are likely hoping that the Shattenkirk deal  sends a message to the fans and everyone else that the Capitals, for better or worse, are “all-in” this year in their chase for the Cup.  Many folks appreciate that the team is going for it, and some fans are excited for the rest of the season and playoffs.

I've never been so giddy before as a @Capitals fan right now! We are going for it! Can't wait to see Shattenkirk in DC #Caps #capitalstalk

No better time to go for it for the Capitals. Good for them for trying. https://t.co/7vQSkevwzc

What I'm saying is, I respect the Caps for going all in this year.. ballsy move. However, he will be a @NYRangers next year https://t.co/KIDLsqnxHY

Like the Shattenkirk deal for the Caps. Not too steep of a price, and this may be their best shot to win the Cup. Go all in.

If the Caps were not favorites to win the cup before Monday’s trade, they are certainly the favorites now.  Some folks went just short of guaranteeing the the Caps’ will hoist the Cup. Others fawned over their abundance of talent.

The Capitals are going to win the Stanley Cup https://t.co/aTW8tXhWB3 pic.twitter.com/4Q2XSsxkjj

So the Caps are winning the cup

It's official… the Capitals have just won hockey! pic.twitter.com/L8722chRqH

So the Capitals are Cup favourites.

Unfortunately, history is working against Washington. Not only has the team never won a Stanley Cup since entering the league in 1974, but they’ve only made it out of the second-round once. Many people love reveling in the franchise’s misery and poked fun at the team’s less than impressive playoff history.  Some fans made sure to announce that they are not getting their hopes up.

So what's the Capitals parade route? Like down Massachusetts Ave from Dupont to Chinatown or lol cmon we all know better than this

Look at the @Capitals getting reinforcements. Scared of a first-round series with the @NYIslanders?

Capitals know nobody can stop them in the playoffs if they trade for every player in the NHL. Smart

CAPS GUY 1: "We're a regular season juggernaut that struggles to reach the Cup. What should we do?"
CAPS GUY 2: "Get guys from the Blues."

Oh oh *this* is the Caps year, you see it's different from all the other years because

Will this be the Capitals’ year? Adding Shattenkirk is another reason to be optimistic that Washington can go all the way. But, as good as they are, to buy stock in the Caps chances means that you have to believe they will overcome their history. It’s been the same song-and-dance with Washington for years.

During last year’s regular season, one in which Washington led the NHL with 56 wins, a frequent topic of discussion was whether it was “the Caps’ year.”

Is this the #Capitals’ year? Four teams that could win their first Stanley Cup https://t.co/3gL6gmMzFZ via @npsport pic.twitter.com/No0HsL6goG

@toddcmoritz ive been following, but not watching. is it finally the caps year? panthers/stars maybe? hawks possibly?

Is this the year the #Caps go all the way? @NHLBarryMelrose will share his thoughts on that and more at 12:30 on the Sports Fix @kevins980

Is this finally the Washington Capitals' year? https://t.co/BchiySgTPW

Turns out, last year wasn’t the Caps’ year, as they lost in the second round of the playoffs to eventual Stanley Cup champions Pittsburgh. Neither was the season before, when the Capitals had 45 regular season wins but had another second round playoff flameout.  With Washington, the perennial choking usually feels inevitable.

But this year seems different, again.

Is this the Capitals year?

The #Caps say "this is the year" with Shattenkirk. Who's left on the market? Updated #TSN Top 40 Trade Bait board: https://t.co/u4oRM3vhub

IS IT THE CAPS YEAR

I think @shattdeuces a great add. Not sure anyone has ever said this before but…I think this is the Caps' year.

So again, we wonder, “is this the Caps’ year?” I’m going to foolishly buy stock in Washington’s chances. They are steamrolling opponents on a nightly basis. Also, the time is right. The Chicago Cubs just ended their 108-year World Series drought. The Cleveland Cavaliers just broke through for their first NBA title. Why not the Caps? I think the sports gods shine down on them next. We’ll see.